Installation of crosswalks intended to show support for LGBTQ inclusion 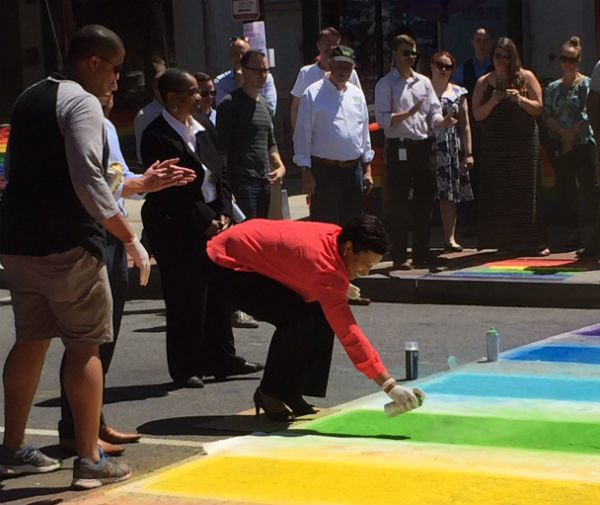 On Friday, the District of Columbia unveiled the first of eight Pride-themed temporary crosswalks on 17th Street NW, in recognition of June as LGBTQ Pride Month.

The crosswalks, which will be painted by volunteers, will appear along a stretch of 17th Street between P and R Streets, also known as Frank Kameny Way, named after the late LGBTQ rights pioneer. Six of the remaining crosswalks will feature rainbow flag designs, and one will be painted in the colors of the Transgender Pride flag. 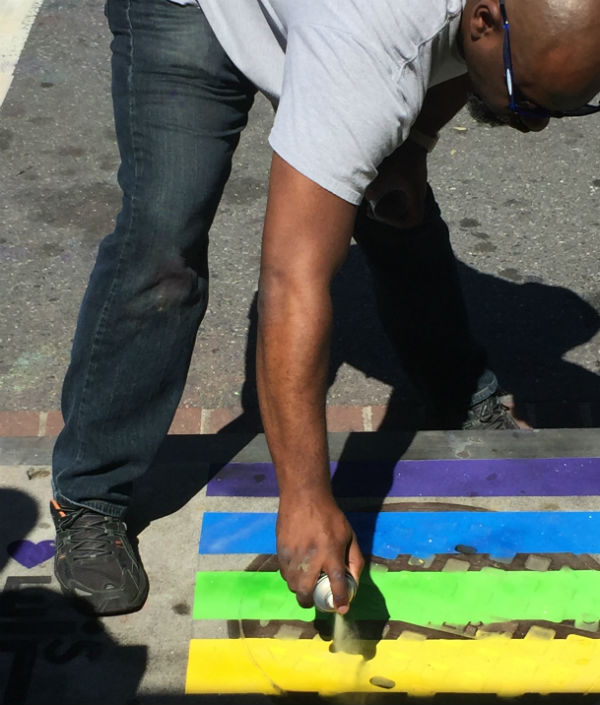 All crosswalks will be completed and unveiled at a ribbon-cutting ceremony on Saturday, June 10, at 1:30 p.m., just hours before the Capital Pride Parade marches down that stretch of 17th Street. Monica Helms, the original designer of the original Transgender Pride flag, is expected to attend.

“What a wonderful grassroots and community initiative that is going to continue to let everyone know that D.C. is the most inclusive city in the world,” said Mayor Muriel Bowser, who announced the launch of the project and participated in the spray-painting of the first crosswalk located outside of JR.’s Bar, in the 1500 block of 17th Street. “We couldn’t be more proud of what we stand for in Washington, D.C., and to kick off the celebration of Capital Pride.”

The idea for the rainbow-themed crosswalks originated with Ward 2 ANC Commissioner Randy Downs, who posted a petition to Change.org asking for rainbow crosswalks to be permanently installed on that stretch of street. A second petition, on the social networking sit Care2, from transgender resident Kelly Wright, asked that the city consider installing crosswalks painted in the colors of the Transgender Pride flag for Pride season. Both petitions were signed by thousands of people who supported the idea. 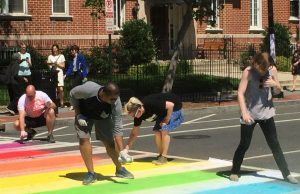 Combining Downs’ and Wright’s ideas, the District’s Department of Transportation agreed to allow the installation of temporary crosswalks, but could not grant them permanent status due to federal standards governing crosswalks, according to Downs.

The city did agree to the permanent installation of rainbow flag banners on lampposts along Kameny Way, and the installation of four storm drain murals on 17th Street NW (out of 16 across the District). The District’s Department of Energy and Environment and the Anacostia Watershed Society have put out a call for artists to submit designs for consideration by Friday, June 16. Guidelines for the designs can be found on the Watershed Society’s website at anacostiaws.org.

In the meantime, for Pride season, one of the storm drains outside of JR.’s Bar has been painted with a glitter rainbow flag design and the words “Love is Love,” as an example how the storm drains will be decorated. 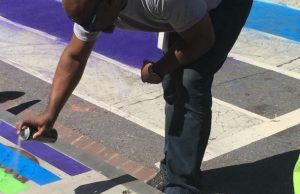 Much of the money for the installation of the crosswalks and the lamppost banners was provided by Dr. Howard Brooks, the head dermatologist at SKIN Cosmetic Dermatology of Georgetown, who donated $1,500. The city will use additional funds to cover the remaining installation and permitting costs.

For Downs, who was raised in rural Missouri, seeing his idea come to fruition was satisfying. 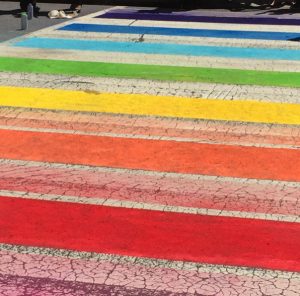 “Missouri is a hard place to live, as a gay person. So when I moved to the city six years ago, I instantly felt welcomed and valued. I’ve been able to live as my true, authentic self,” he says. “And so I wanted to make sure that others who might be questioning their identity, their acceptance, or their worth, saw a symbol of that celebration. It’s really important we have these symbols, and show that queer folks are part of the community, that they’re valued.”

Wright, who comes from a similar background in rural Ohio, says she initially was skeptical that the city would approve her idea, but was overwhelmed by the positive response she received. She also says the inclusion of the Transgender Pride flag along with the rainbow crosswalks is a symbolic way to recognize the historical role the transgender community played in jump-starting the modern LGBTQ rights movement, beginning with the Stonewall Riots of 1969.

“It was trans women who were at the vanguard of those riots, Sylvia Rivera and Marsha P. Johnson,” says Wright. 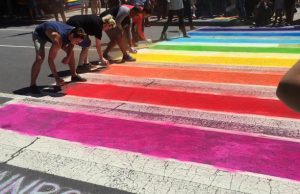 Bowser also took the opportunity to invite residents of the District to attend and participate in both Capital Pride‘s festivities, occurring throughout the weekend, and the upcoming Equality March for Unity and Pride on Sunday, June 11.

“We know a lot changed on Election Day last year, didn’t it?” Bowser said in prepared remarks, referencing the election of President Donald Trump. “But I know what didn’t change — and that’s us. And that is our commitment to the values that make us an inclusive and diverse city. This project today is just one demonstration of how we will be inclusive and diverse. … We want to send the strong message that we value and protect D.C. values in Washington, D.C.”

John Riley is the local news reporter for Metro Weekly. He can be reached at jriley@metroweekly.com
← Previous Story Equality March for Unity and Pride to hold post-march rally
Next Story → Deirdre Grimm pens open letter as Gavin graduates from high school