Review: “Cabaret” at the Kennedy Center

Roundabout's Cabaret sizzles with sexuality, though it lacks a truly galvanizing Emcee or Sally Bowles

Roundabout Theatre Company’s production of Cabaret (★★★) bumps and grinds its way through a solid, legs-wide-open rendition of Kander and Ebb’s timeless musical. Inspired by Sam Mendes and Rob Marshall’s singular nineties production, the national tour, directed by BT McNicholl, turns up the naughtiness and puts the bi in “bye-bye, Mein Herr.”

Guided by his new German friend and pupil, Ernst Ludwig (Patrick Vaill), Cliff quickly discovers the city’s louche, licentious underbelly at the Kit Kat Club, where the twisted Emcee (Jon Peterson) holds court behind a mask of white makeup and red-rouged bare nipples. Populated by society’s sexual rebels and outcasts, the Kit Kat is a divey, dark reflection of the waning years of Germany’s post-WWI Weimar Republic. Inside, anything goes and everything’s for sale.

Expressive lighting extends the club into the audience, infusing the Eisenhower Theater with a speakeasy sense of underground rebellion. The Kit Kat girls and boys grab attention before the show begins, prowling and stretching across the multi-level set either shirtless or in lingerie. All of the Kit Kat players deliver: the band blazes through often inventive arrangements of Kander and Ebb’s fantastic songs, while backup dancers and singers for the Emcee, and the club’s star performer, Sally Bowles (Leigh Ann Larkin), turn the main stage into a thrusting, contorting, naughty playground.

Sally is quite naughty herself. She’s loose and a liar, snorts cocaine, and doesn’t care nearly as much as Clifford does about the rising power of the Nazi party. Larkin is delightfully brassy and sings marvelously, but her Sally’s more exasperating than lovable. While she seizes every bit of humor in the bawdy “Don’t Tell Mama,” she pours enough acid into the deliberately paced take on the show’s classic title tune to sear a hole through the stage.

Eakeley sharply conveys Cliff’s smarts, quickened pulse and bisexual curiosity, but he and Sally’s romantic entanglements don’t engender half the interest generated by the love story between Cliff’s landlady, Fräulein Schneider (Mary Gordon Murray), and her widower tenant, Herr Schultz (Scott Robertson). As Schneider, Murray gathers steam throughout the show, both funny and endearing as an exceedingly practical woman who must measure whether she’d give her life for love. By the time she performs “What Would You Do?,” she’s usurped the heart of Cabaret.

The politics of the show come across cogently, though they’re somewhat muted by the Peterson’s almost-warm portrayal of the Emcee. The greater (and more persuasive) emphasis seems to be on sexual politics, and the story’s timely message of fluidity and acceptance, imparted as much by the stew of attractions and betrayals as by McNicholl’s full-bodied staging and the original, suggestive choreography, recreated for the tour by Cynthia Onrubia.

There’s only one lady in this Kit Kat’s hot and handsy “Two Ladies,” but it’s plenty delightful, as the Emcee gives a little and gets a little from Lulu (Chelsey Clark) and Bobby (Joey Khoury). Peterson might not capture the indomitable edge of menace the Emcee can add to the club, but he sells the imp’s lustful attitude and appetite for provocation.

The Emcee takes pleasure in thumbing his nose at convention, just as Cabaret uses outré carnality and violence to tell a story about believing in love during a time of shocking inhumanity. The heat shoots like lightning from the Kit Kat players, who transform the Eisenhower Theater into a sultry and intimate club, where life is beautiful, the girls and boys are beautiful, and everyone’s troubles wait outside. 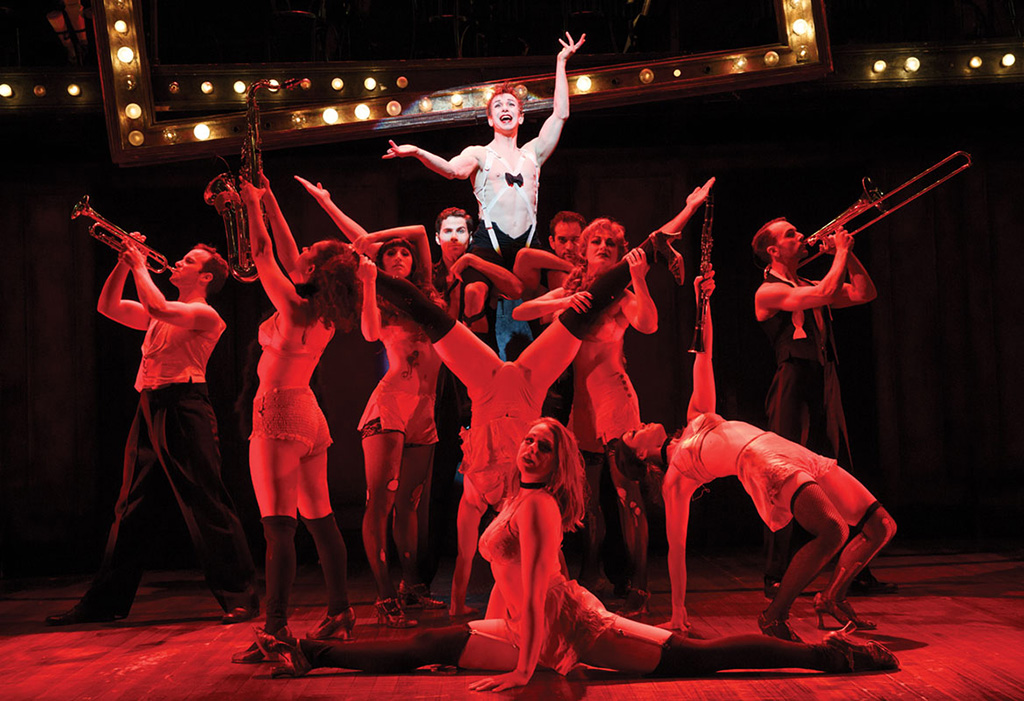