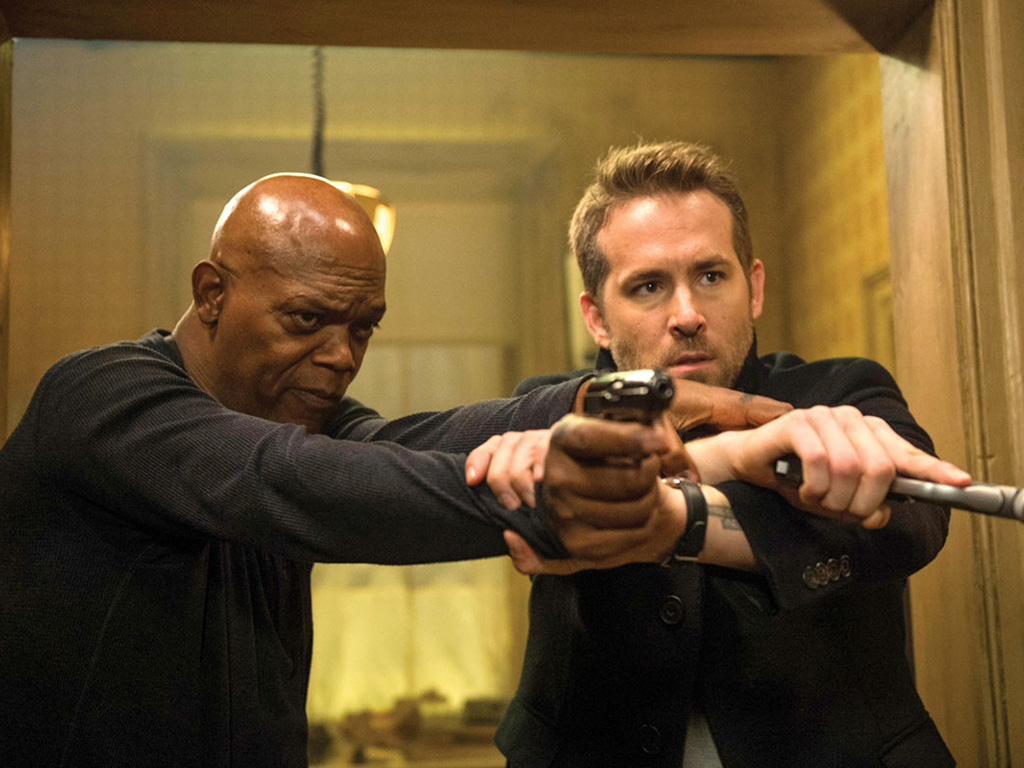 Is any major movie star more gleefully unpretentious an entertainer than Samuel L. “Motherfuckin'” Jackson? Whether getting chomped in half by a biochemically-engineered, super-intelligent shark, or growling a heap of mess at Django, he glides across genres and periods with the winning insouciance of a professional who knows exactly what he’s here to do.

This safe house is in London, not Cape Town, and instead of Denzel Washington, he’s protecting Darius Kincaid (Jackson), not an ex-super spy but a present-day super-assassin. Bodyguard Bryce has to get the hitman from the safe house to the International Court in the Hague to testify against Vladislav Dukhovich (Gary Oldman), a brutal Belarusian dictator. Will they make it in the nick of time?

Whatever the tweaks to the formula, the chemistry is mostly right, catalyzed by writer Tom O’Connor’s cheeky dialogue, and sharp direction by Patrick Hughes, who broke into blockbuster territory with The Expendables 3.

The Hitman’s Bodyguard shares with that guns-and-pecs-fueled franchise an abiding affinity for big, bruising ’80s-style action. Our heroes never meet a problem that can’t be solved with a gun, a bigger gun, an explosion, or a pithy comeback. As Bryce and Kincaid beat a steady, wisecracking path across the continent, with Interpol and Dukhovich’s men hot on their tails, they flip cars, blast through and blow up countless Belarusian henchmen, and even make time to bare their feelings about ethics and romance.

Kincaid’s not a bad guy, you see. He’s a hitman with a moral code and true love in his heart. He lives for his badass wife, Sonia, played for all she’s worth by Salma Hayek, who is every bit Jackson’s match when it comes to spitting streams of expletives with concussive force and musicality. Plus, she does it in two languages. Separated on-camera for much of the running time, Jackson and Hayek nail Darius and Sonia’s simpatico spirits. They’re a couple who seem made for each other, and their long-distance romance provides compelling underscore for the film’s laugh-out-loud comedy and outrageous action. Bryce and Kincaid fight their way out of many tight skirmishes, including one breathtaking clash with a gang of goons in a galley kitchen. The stunt work is impressive, if a little too obviously faked on occasion, and Hughes keeps the energy pulsing.

But whereas the chases by boat, motorcycle, or beat-up hatchback zig-zag with moments of genuine surprise, the story offers few such hints of originality, and subtlety is not a strong suit. In predictable fashion, an orange-tinted spray-tan signals a character’s insincerity, a lingering clench of a shoulder signals another’s villainy.

The film feints at real-world commentary by zeroing in on a recognizably unhinged despot as its main villain, but The Hitman’s Bodyguard is no twisty, Bourne-ian take on geo-politics. It’s a straightforward, crowd-pleaser, well-executed by professionals who know what they’re here to do.

First among them, Oldman might or might not speak Russian with a ridiculous accent, but he’s as committed to harassing frightened villagers and ordering around his enforcers as if he were playing King Lear. Richard E. Grant also gets in on the scenery-chewing fun in a brief turn as a coked-up security client, and, as the French-speaking Interpol agent girlfriend, Elodie Yung at least gets to take out her share of bad guys.

Everyone appears to be working in the proper mode of not taking the globe-hopping adventure too seriously. While the picture doesn’t necessarily stick the landing, it does add richly to Jackson’s lexicon of quotable lines and catchphrases, and it’s unrelentingly entertaining the whole time.

André Hereford covers arts and entertainment for Metro Weekly. He can be reached at ahereford@metroweekly.com. Follow him on Twitter at @here4andre.
← Previous Story Reel Affirmations presents The Death and Life of Marsha P. Johnson
Next Story → Review: Every LGBTQ film at this year’s DC Shorts Festival