Review: Keegan’s “Stones in His Pockets”

Marie Jones’ Stones In His Pockets (★★★★) races along on a thrilling trip to County Kerry, Ireland, delighting despite a plot that takes a few dark turns towards death and desperation.

The briskly paced comedy calls for two performers to enact an entire cast of characters. It’s all centered on the set of a Hollywood movie that’s landed in the rural hamlet to take advantage of the green pastures, quaint atmosphere, and majestic views of the Isle’s southwest coast. Nearly every able-bodied man in town, and even a few less able, have been employed as extras by the film’s producers, who hope the locals’ brogues and hardy visages will lend authenticity to their production, The Quiet Valley.

While the movie appears to be a fairly inauthentic class-warfare drama involving turf diggers, a precious lady of the manor and a local hero on horseback, the play’s voice rings true. And Keegan Theatre’s production, directed by Abigail Isaac Fine, delivers Jones’ dense chorale of notes and rhythms with exquisite precision.

Leading the fifteen characters floating around The Quiet Valley are Jake Quinn, a hometown hero recently returned from the States, and Charlie Conlon, fresh in town all the way from Ballycastle, a small burg far up North.

Charlie doesn’t know a soul in town, while Jake knows or is related to practically anybody who’s ever called the place home. On-set, awaiting their cues as riled-up turf diggers, the former strangers, now friends, bond over a mutual history of struggling against setbacks. Charlie owned a business in Ballycastle, but it went belly-up. Still, he retains a bright, albeit slightly tarnished optimism that he’ll make something happen for himself.

Jake, on the other hand, views his brief sojourn across the pond as a definitively failed shot at achieving the American dream, and, potentially, an end to dreaming at all. Still, he projects the requisite professionalism to attract the attention of the film’s leading lady, an American film princess named Caroline Giovanni.

Intent on achieving her own dream of a convincing performance, the movie star favors the extra with an invite to her hotel that sets all tongues wagging. Everyone from the film’s aloof director to the crew’s persnickety second assistant director to Jake’s emotionally troubled cousin, Sean, also an extra, weighs in on the relationship brewing between Jake and Caroline. The couple’s rendezvous are a comic highlight of the show, though the fallout proves to be quite serious, and even tragic.

Through tears and laughter, Jake, Charlie, Caroline, and the lot don’t take turns at the proverbial mike. They interact, carouse, chastise, and seduce, on the set, in the pub, and inside the movie star’s trailer. The quick-change artistry required of Matthew J. Keenan and Josh Sticklin, each playing his share of the characters, unaided by any major changes in costuming, sets a dizzying standard that each actor thoroughly surpasses. It’s an exhilarating display.

Fine sets the action on an unadorned stage, save for a few props, lights, and the film crew’s camera. A wide projection screen offers backdrops of Kerry’s coastal vistas and rolling heaths. Occasionally Jake and Charlie’s on-camera “performances” are projected on-screen, where the audience can best enjoy their pointed reactions to the chaos caused by the film’s fierce, but not unwelcome, intrusion on the routine of country life.

The Quiet Valley isn’t the first major Hollywood production to blow through this town, but it’s probably the biggest since the shoot for the John Wayne classic The Quiet Man brought the Duke himself sauntering into Kerry. Mickey, the oldest, and likely the last extra from that storied production still dines out on tales of his brief convos with Wayne.

Meanwhile, Jake curses the movies for filling the heads of boys like him and Charlie and Sean with big dreams. But watching talented performers like Keenan and Sticklin attack so daunting a theatrical task with such skill and joie de vivre does its own to inspire. These gentlemen earn no curses, just caps doffed in respect.

Review: Ford’s “Death of a Salesman”

Stones In His Pockets by Keegan Theatre 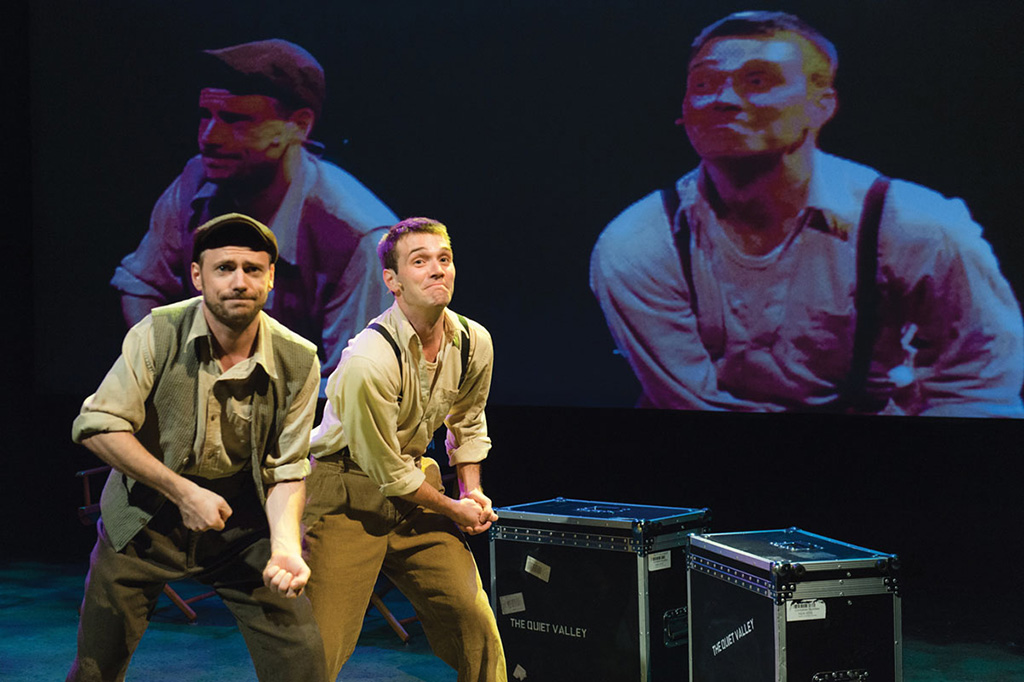