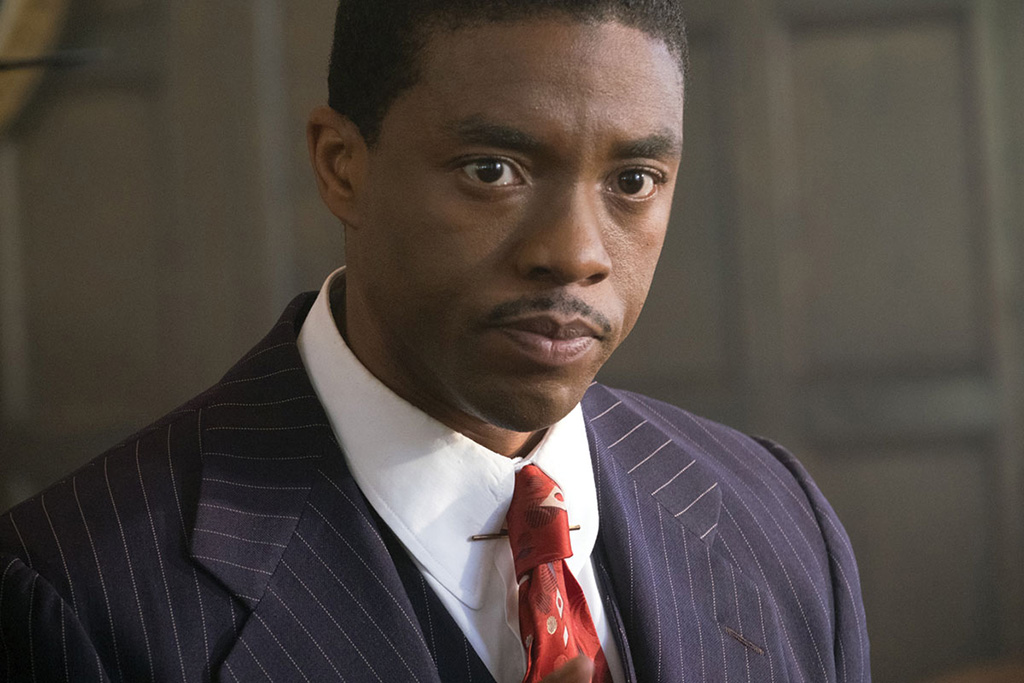 For decades, Hollywood didn’t make big-budget biopics about black heroes. And on the rare occasions a popular African-American figure was deemed important or bankable enough to warrant such treatment, the producers just hired the guy to play himself, as with Jackie Robinson in the 1950 hit The Jackie Robinson Story, or Muhammad Ali in the 1977 drama The Greatest.

Now, Hollywood is hitting a hot streak of glossy, A-list dramas about black historical figures, with films such as Selma, 42, Get on Up, and Hidden Figures. The streak continues with Reginald Hudlin’s glamorous yet gritty portrait of legal titan Thurgood Marshall in Marshall (★★★½).

The film stars Chadwick Boseman — Jackie Robinson in 42, James Brown in Get on Up — as the future first African-American Supreme Court Justice. Every black cultural hero of the 20th-century (not named Poitier) should wish he were as movie-star dashing as Boseman. Was Jackie Robinson this coolly self-confident, or James Brown this disarmingly smooth? Could Prince T’Challa of Wakanda be as regal as Boseman portrays him to be?

The latter man is fictional, of course, the royal alter ego of Boseman’s Marvel superhero character Black Panther, a role he invested with as much gravity as he does his portrayal of Thurgood Marshall.

Pictured in 1942 as a wandering crusader for the NAACP, Marshall treks from town to town across the U.S.A. fronting the organization’s mission to provide the best legal defense for black defendants whose cases have stirred up racial rancor. Arriving in Connecticut to take the case of chauffeur Joseph Spell (Sterling K. Brown), accused of the rape and attempted murder of a white society lady, Marshall informs the man in no uncertain terms that he and the organization only get involved for those defendants who are innocent of the crimes for which they stand accused.

The film doesn’t really stake its case on a belief in Spell’s innocence in his encounter with the accused, Eleanor Strubing (Kate Hudson), the wife of Spell’s employer. Rather, the script, by Michael and Jacob Koskoff, and Hudlin’s direction are committed to a faith in Thurgood Marshall, the belief that his strategic vision, legal acumen, and ruthless determination will win the day, in what boils down to a sex and race-baiting courtroom drama. 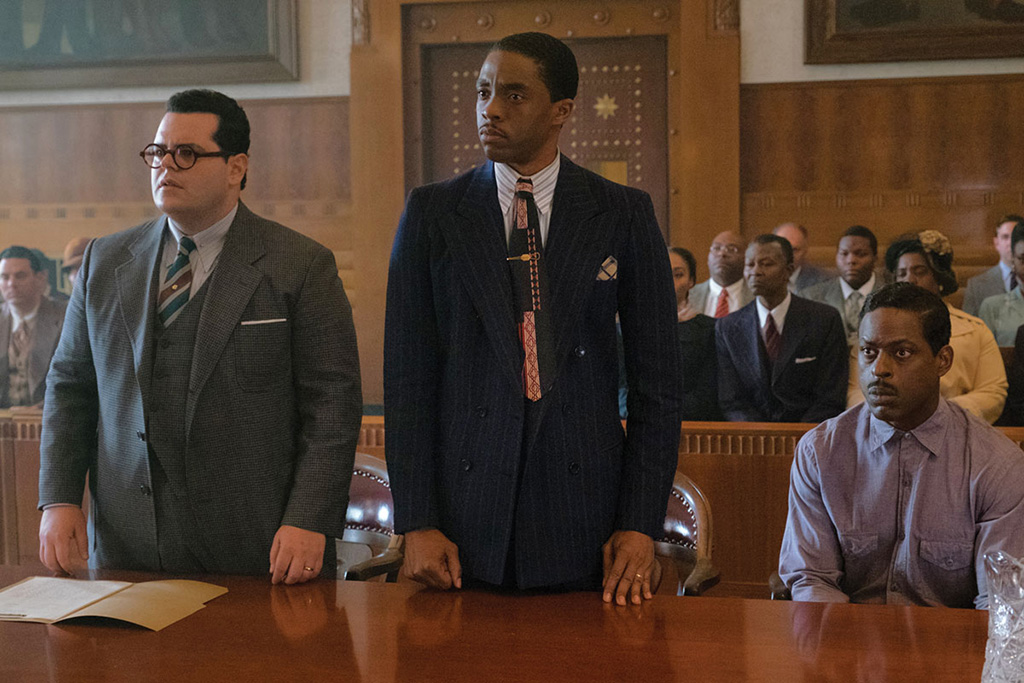 Whatever happens to Spell, Marshall walks with the angels, and Boseman embodies the nobility of Marshall’s calling and his cause, yet he also bares a sly, rakish side of the civil rights icon. Particularly in his interactions with his co-counsel in the Spell case, Sam Friedman (Josh Gad), Marshall is portrayed as near-relentless about maintaining the upper hand. Boseman’s winking performance hints that Marshall wasn’t merely being competitive. In the face of constant racist harassment, beatings, and threats to his life, he understood that in order to be effective for his clients, he couldn’t bow to anyone’s expectations, even an ally’s, of how a “colored” man should behave.

So he’s arrogant at times, and, despite his devotion to wife Buster (Keesha Sharp), dutifully awaiting his brief returns home to Harlem, he might be more than flirtatious with one or two of the ladies who show him attention. Boseman manages to keep the man sympathetic, even in his missteps. Gad, in the role of the initially unwilling crusader Friedman, makes for a good foil, in both the Abbott and Costello visual sense, as well as in his broader delivery, but he often overplays.

So too with the filmmaking. Marshall’s was a life so full, it could have filled a multi-volume set of biopics, and the filmmakers don’t dally with too much finesse or subtlety getting across the facts they want to convey. If there’s some salient detail, bearing on the plot or portrayal of character, that the movie wants you to know, it just drops it into dialogue.

“Sam, did you know I have only one testicle?” Thurgood asks his incredulous partner. Sam didn’t know, but the story of how it happened does add… something.

Luckily, those moments don’t stop the show, which offers a pointed glimpse at a storied career — although the film doesn’t delve deeply into law, history or politics. Instead, Marshall takes the Hidden Figures, “jolly lessons about oppression” approach to biopics, and stirs it up with a steamy — if formulaic — mystery. It also provides an interesting femme fatale role for Hudson, and another standout performance from recent Emmy-winner Brown. They create enough heat to warrant their own movie.

André Hereford covers arts and entertainment for Metro Weekly. He can be reached at ahereford@metroweekly.com. Follow him on Twitter at @here4andre.
← Previous Story Review: God’s Own Country is an absolute must-see
Next Story → Middleburg Film Festival is this weekend!