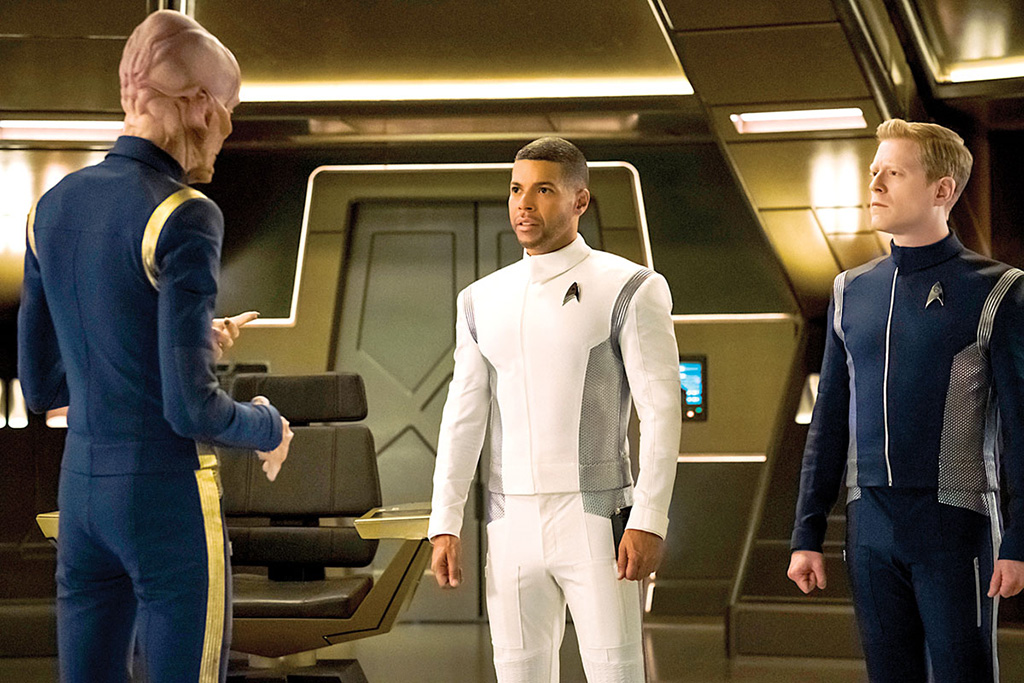 At a time when humanity inches ever closer to midnight on the Doomsday Clock, there is something endlessly appealing about escapism. Whether literature, television, or film, getting lost in a new world can be a much needed distraction from nuclear war, angry tweets, and the impending collapse of democracy itself.

It is in this fantastical, all-consuming realm that science fiction has long flourished. More than just a means to escape, the best science fiction has often drawn from and reflected upon real world events, offering its own utopian, destructive or morally contemplative take on reality. The War of the Worlds was a harrowing commentary on evolutionary theory and British imperialism. 2001: A Space Odyssey tackled technology and artificial intelligence. Dune contemplated the politics of humanity as we battled over resources, drawing on environmentalism, gender dynamics, and the decline of empires. 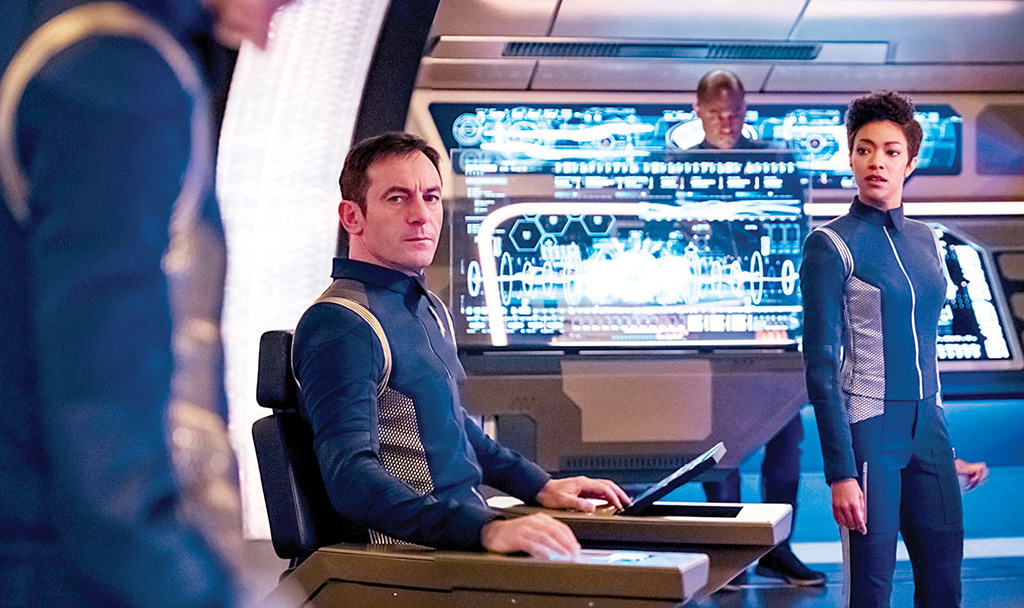 Somewhat uniquely, Gene Roddenberry’s Star Trek opted for a utopian future for humanity. Amid politics of division, as the Cold War raged and segregation still ran rampant, Roddenberry conceived a five-year mission in the 23rd century, where humans and aliens, united together, would boldly go where no man had gone before. In its various incarnations, Star Trek has long attempted to deal with real world issues — race, religion, culture, gender, ageism — through the more advanced minds of its imagined future. Our petty squabbles over borders and bibles meant nothing in 300 years.

It’s why, as we watch the White House become an adult day care center and entire communities divide along racial and political lines, it’s tempting to escape to Star Trek’s utopian future. How handy, then, that Star Trek: Discovery exists.

Unfortunately, not even Star Trek can avoid the darker times we live in. This is a meaner Trek, a more morally dubious, less regimented, and more serialized Trek than ever before. In the six episodes thus far, Discovery (★★★★) has proven that it has no time to coddle viewers with utopia.

It’s a bold vision, one that has angered some hardcore “Trekkies.” It wasn’t helped by a stunningly cinematic opening two-parter that offered a glimpse of another show entirely, one where Michelle Yeoh’s engaging and principled Captain Philippa Georgiou isn’t killed, and instead — together with First Officer Michael Burnham (Sonequa Martin-Green) — boldly goes on the episodic adventures many know Star Trek for.

Instead, we have war. Ten years before the Kirk-starring original series, the Federation is in the nascent stages of battling the Klingons. Burnham, the franchise’s first non-captain and African American female lead, is a mutineer, one who accidentally martyred a Klingon, leading to thousands of Federation deaths and the outbreak of conflict. By the third episode, she is rescued from prison by Captain Gabriel Lorca (Jason Isaacs) to help with the Discovery’s ultra-advanced “spore drive” engine. 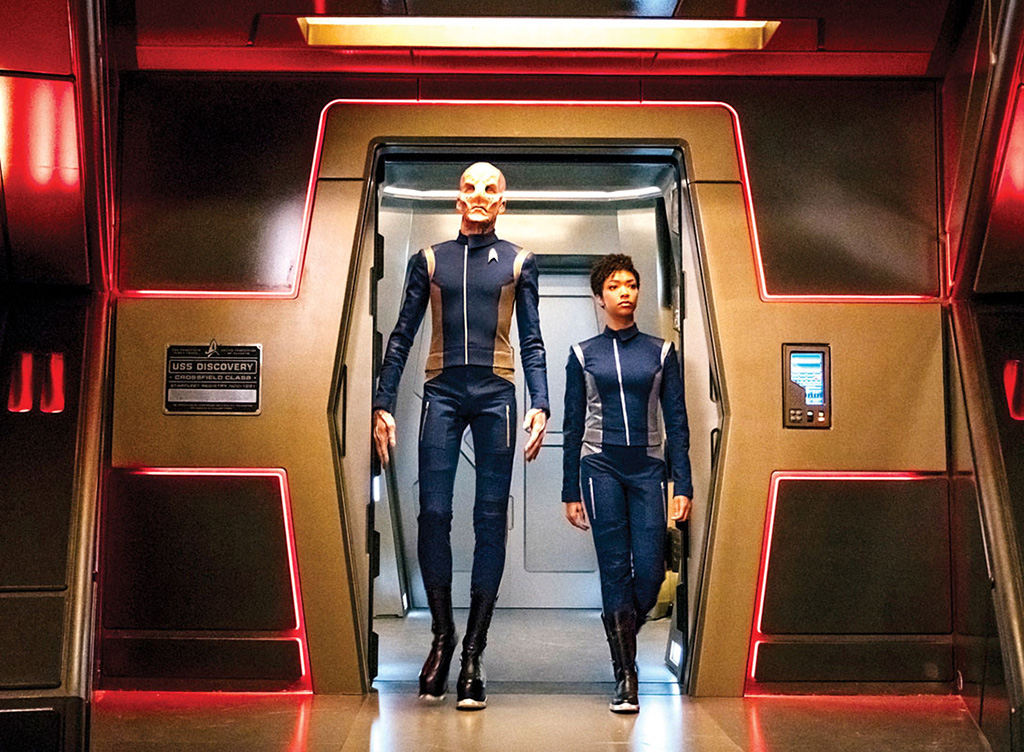 Everything about Discovery is shrouded in mystery, from its mission goals to its technology to the people that inhabit it. Unlike the core crew in Treks past, who worked together to advance their mission, the individuals here all have underlying issues to varying degrees, not least Burnham, whose Vulcan upbringing and conflict between logic and emotion (as well as knowing she’s hated by pretty much everyone who hasn’t met her). Six episodes in, we’re still entirely unclear who anyone really is, whether they even like one another, and what exactly is going on.

“The makeup is stunning, the direction is confident, and the CGI is cinema-quality. Discovery is one of the most polished, well-made shows on television.”

The ultimate goal is oblique, beyond eventually wrapping all of this up for the Kirk era to begin in ten years. And while it’s frustrating to have so many questions unanswered, it’s also fitting. Burnham isn’t a captain — she, and by extension the viewer, shouldn’t know everything. And none of it makes Discovery any less watchable. For starters, name another show that offers this much quality. While its scripts contain some of sci-fi’s clunkier analogies, the reported $8 million per episode budget oozes from every digitized pore. The makeup is stunning, the direction is confident, the character designs are well realized, the ship borrows the moody, military aesthetic of Picard’s Enterprise-E, and the CGI is cinema-quality. Discovery is one of the most polished, well-made shows on television.

The acting, too, is on point. Martin-Green is exceptionally well cast as Burnham. As a character in constant conflict with her actions and upbringing, she manages to be both perfect and flawed, a know-it-all who inspires others to look past her mutiny and instead find the real person underneath. Jason Isaacs is a powerful presence as the enigmatic Captain Lorca, a man damaged both physically and mentally by prior decisions. Doug Jones works through dense layers of makeup to give Lieutenant Commander Saru the right balance between neurosis and nuance. Mary Wiseman is perfectly cast as Tilly, whose comic relief is more than welcome in some of Discovery’s darker moments.

The show is not without its flaws. Chief among all of this is the science at its core, the spore drive that allows Discovery to jump to any part of the galaxy at will. It doesn’t exist in any future Trek franchise, is utterly ludicrous, and will at some point have to be discarded. Any scene with extended periods of slow, laborious talking by the Klingons kills the momentum. And Discovery currently lacks a cohesive group of core characters to drive its narrative like Treks of yore. But there’s promise.

Amidst all of this, there’s still flashes of utopia. Take Science Officer Paul Stamets (Anthony Rapp) and Medical Officer Hugh Culber (Wilson Cruz). Discovery feels no need to push their relationship to the fore. It would have been easy to celebrate the franchise’s first openly gay characters (the reveal of Sulu’s sexuality in the Abrams’ films notwithstanding), showing viewers that yes, they’re gay! And together! How progressive! But no. Their relationship is instead teased out over the first few episodes, with glances, comments, and nuanced moments, until the reveal that the men are together. Sexuality, at least in 2256, doesn’t matter.

At a time when reality becomes ever more depressing, it would be easy to pine for a more traditional Trek, one which offers single-episode moral quandaries, neatly resolved, as everyone gets along swimmingly. While Roddenberry might not have approved of this darker iteration, Discovery is a bold interpretation of what it means to go where no man has gone before. For everyone else, there’s always reruns of classic Trek on Netflix. 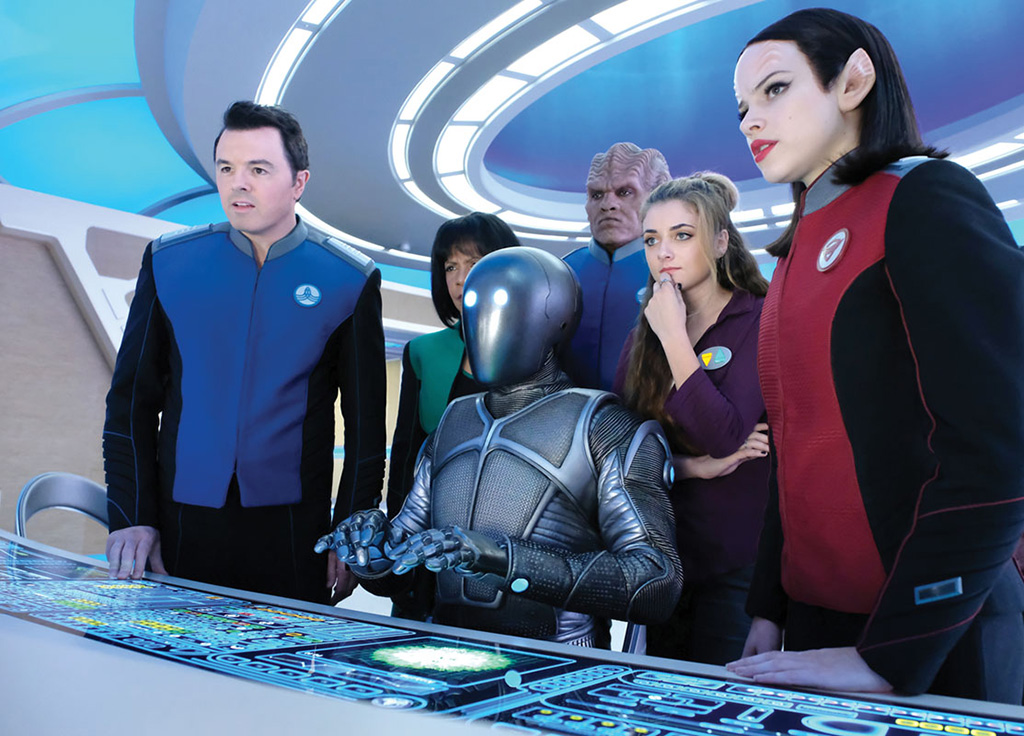 Or, you could switch over to Fox. There, you’ll find The Orville (★★★★), one of this year’s most divisive shows. From the mind of Star Trek fan and animation juggernaut Seth MacFarlane it is, essentially, Star Trek: The Next Generation with dick jokes.

Equal parts homage, satire, and blatant rip-off, it would be easy to dismiss. Attempting to mix utopian space exploration drama with sitcom-style comedy, the first few episodes are rough. From dated cultural references (apparently nothing has happened of note between the 21st and 25th centuries) and shoehorned jokes, to lazy metaphors and clunky dialogue, The Orville does not make a great first impression. It’s not helped by a third episode that tries to heavy handedly discuss issues of gender and sex, as two members of an all-male race have a female baby and consider whether to “fix” her through surgery. What could have been a powerful discussion ends up using offensive terms (“sex change”) and leaving a mixed message about its desired goals.

MacFarlane, while a talented voice actor, is an initially bland presence in the captain’s chair — one he clearly wanted to inhabit as a Trek-watching youth. Meanwhile, compared with Discovery, the production values look like the crew was given access to some old Next Generation props and some early ’90s special effects computers. 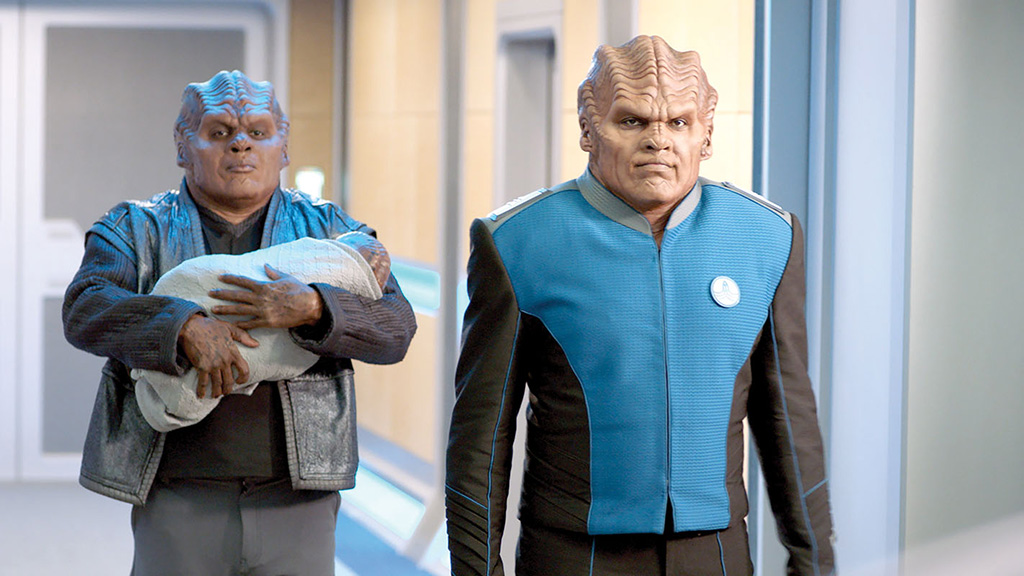 But something happens during the fourth episode. As Discovery delves further into darkness and mystery, The Orville finds its footing — albeit one obviously moulded by Next Generation. The jokes, which grated against the more dramatic elements, start landing. And while the crew isn’t united — they bicker, lie, and tease one another, and MacFarlane’s Captain Ed Mercer butts heads with ex-wife and First Officer Kelly Grayson (Adrianne Palicki) — they feel more like real work colleagues than in some of Trek’s more idealistic moments. Unlike Next Generation, Orville is utopia with cynicism.

This deviation from the Trek formula, while still largely following a similar plot structure, has allowed for some genuinely funny comedy when MacFarlane refrains from frat-boy humor. But it also allows for the sort of moral dilemmas that plagued Trek’s captains. Do you blow up a ship containing the enemy’s children to save a human colony from destruction? Or risk everything to find another solution?

As the episode count increases, The Orville is feeling more cohesive, more assured in what it wants to be. It can still lurch between comedy and pathos a little too eagerly, but it’s all getting tighter. MacFarlane, too, starts to shine a little brighter in the role, proving his Mercer isn’t just a generic everyman, but actually a surprisingly brilliant if imperfect captain. Palicki is perfectly cast as his occasional ally, occasional foil, her comic timing on point. Penny Johnson Jerald may have wondered what exactly she signed on for, but brings needed gravitas as the ship’s doctor Claire Finn, while Halston Sage shines as the nervous but extremely capable (and extremely strong) security officer Lt. Alara Kitan. Where Discovery is focusing on individuals at the expense of a larger whole, The Orville is treading much closer to the ensemble team feel of previous Trek series.

The Orville isn’t for everyone, and it’s certainly not in the same production league as Discovery, but what MacFarlane and co. are offering is something altogether different. This isn’t a gritty, serialized drama wrapped around familiar themes. Instead, it’s a lighthearted, often gripping dramedy about a future where humanity is still very much flawed, but things are much, much better.

Either option, really, is better than watching another minute of the Trump show.