Quietly affecting, the Washington National Opera’s new production of Handel’s Alcina (★★★) is a gift to baroque lovers and anyone who needs a bit more 18th century harpsichord in their life.

With clean, abstract sets and costumes echoing an early 20th century Europe, director Anne Bogart makes the interesting choice to pull the story out of its historical trappings and give it the slightly surreal feel of a modern Tempest. Thoughtfully evoked, Alcina’s island is suggested with set designer Neil Patel’s glistening floor and schematic circles — one raised center stage and the other a massive cut-out behind the action. Their emphasis and cosmic power come and go with Christopher Akerlind’s subtle static projections and deep glowing colors, the moods changing almost imperceptibly, and the effect works well in the Kennedy Center’s smaller Eisenhower Theater.

It is a pared-down vision, one that director Bogart offers as an invitation to hear the music in a new way. Handel may have composed in a time of powdered wigs and beauty marks, but in Bogart’s amorphous netherworld, the baroque voice, with its long vocal “runs” and extended riffs on single-minded emotion, becomes ripe for a timeless kind of contemplation. Who would have thought to use the human voice in such a strange, affected way? Why does it touch the soul?

If Bogart captures Handel in this lovely, serene space (and conductor Jane Glover brings an appealing effort from the WNO orchestra), there are some challenges. We join Alcina in her prime, a sorceress who flits from lover to lover, turning them into stones and animals when she tires of them. Her kingdom of victims is forever disrupted when Bradamante, a young woman disguised as a male soldier, arrives in search of her lover Ruggiero, who has been bewitched into a wild infatuation with Alcina. If the plot creates dramatic tension and allows the lovers long, gorgeous agonies, it also presents the problem of how to show or suggest the action when so much of it is suspended during a lengthy aria. Here, there is a tendency to a bit too much agitation on the central circle of stage, and a few too many lugubrious entrances and exits during which the cursed former lovers carry their cubist seating. Though opera has moved away from the “park and bark” model, the other extreme can be too much distracting busywork — and there is a whiff of it here.

Thankfully not overdoing it is Angela Meade in the title role. A quiet yet commanding presence, she convinces as the powerful sorceress, singing with a lustrous, rich soprano. If she doesn’t bring every dexterity to the baroque runs, there is something majestic in her almost languid approach. She sits in interesting juxtaposition to Ying Fang’s Morgana, Alcina’s younger sister, who falls madly in love with the disguised Bradamante. Fang has an unassailably true-toned, beautiful soprano — and she is technically wonderful — but there is something almost rebelliously compelling, and perhaps more expressive, in Meade’s less pristine approach.

As Bradamante, Daniela Mack is tasked with much of the over-egged running around, as she fends off the ardent Morgana and then realizes the fate of her lover. She sings with much appealing expression, but it can feel slightly forced at times and there is not quite enough savoring of Handel’s nuance. Still, Mack delivers her character with convincing angst and her chemistry with her concerned colleague Melisso, sung with pleasing gusto by Michael Adams, is solid. Also effectively sung is Rexford Tester as Oronte, Morgana’s erstwhile boyfriend.

But along with Meade, the real standout here is Elizabeth DeShong as Ruggiero, traditionally sung as a “trouser” role. A truly excitingly singer, DeShong’s deeply powerful mezzo soprano electrifies the night. She is precise, utterly engaged and she breathes compelling life and urgency into her Handel. If there is little to no chemistry between her and Alcina, it doesn’t matter all that much — this Ruggiero is angry at himself, questioning his personal integrity, asking himself how he could have been so easily bewitched.

Between Ruggiero’s trouser role and Bradamante’s disguise as a man, there is an interesting play on gender here. Director Bogart continues the theme with another trouser role in Barney O’Hanlon’s charmingly choreographed interludes of dance. Together, these gentle acknowledgments of gender fluidity give the piece a quiet contemporary resonance.

Thus, this thoughtful production sates the needs of the baroque lover, but it will also fascinate anyone with a curious mind and an open musical soul. 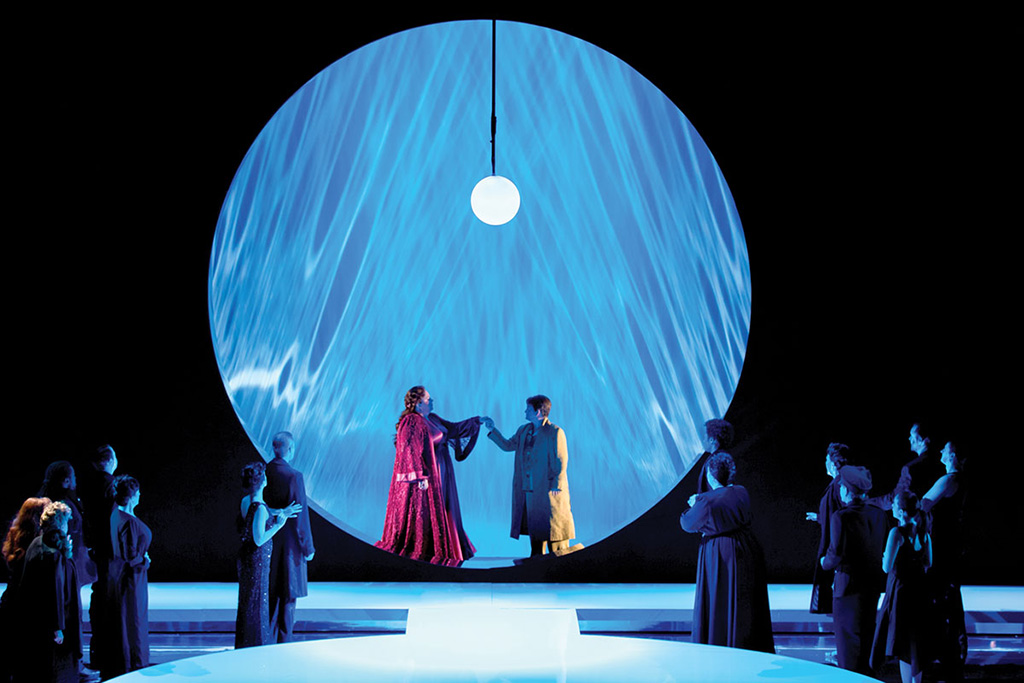