The new musical Mean Girls is a work-in-progress, having just opened in a pre-Broadway trial run at the National Theatre, but what a “fetch” piece of work it is. Tina Fey, overseeing the adaptation of her screenplay for what is intended to become her Great White Way debut, ensures the story hews closely to the 2004 movie’s original plot, and also that the few minor alterations — references to iPhones, emoji, and the current Twitterer-in-Chief — maintain the plucky and wry comedic sensibility that is her signature. Fey ensures success by tapping director and choreographer Casey Nicholaw to put his signature on the production, which results in Mean Girls (★★★★) moving with the same exaggerated, kinetic energy that helped The Book of Mormon win multiple Tonys.

Nicholaw has worked with Scott Pask to create a set that is even more of a technical marvel than this year’s Tony-winning digital feat Dear Evan Hansen. Pask’s sets are more virtual than physical, with video designers Finn Ross and Adam Young using sophisticated and colorful projected digital and LED imagery to frame scenes in the jungle, in school, and at home.

For the score, Fey turned to her husband, composer Jeff Richmond — who worked on her award-winning sitcom 30 Rock — and lyricist Nell Benjamin (Legally Blonde). Together, they’ve created songs as appealing as the story, in part by sticking to a familiar hodgepodge pop pastiche model that has worked for so many modern-day musicals, from Hairspray to Kinky Boots.

The story still revolves around Cady Heron and the “Queen Bees” clique, the Plastics. Certainly the franchise would fizzle without strong female leads giving dynamic performances — a bar set incredibly high from the get-go, particularly with the perfect casting of Lindsay Lohan as the film’s Janus-faced heroine. To her credit, Erika Henningsen doesn’t channel Lohan in her portrayal of Cady, the school newcomer fresh from Africa. She makes the character smarter, more personable, and wholly her own. Better still is Taylor Louderman as mean queen Regina George, who is simultaneously meaner and more likeable than Rachel McAdams’ original. As one of Regina’s two sycophants, Kate Rockwell offers a perfectly realized portrait of Karen Smith, who’s not as dumb as she repeatedly protests to be, and Ashley Park, who unexpectedly injects the woefully co-dependent Gretchen Wieners with enough heart to make you feel for the pampered princess.

Kerry Butler channels Fey as teacher Ms. Norbury — so much so, you’d be forgiven for wondering if it is Fey taking the stage in an uncredited cameo. Butler also shoulders the roles of the musical’s mothers, both Cady’s and Regina’s, and she’s a scream portraying Mrs. George as the most desperate wannabe in her daughter’s posse — the “Cool Mom” from hell.

Grey Henson is “almost too gay to function” as Damian Hubbard, and does his best to color outside the scripted lines, attempting to add some dimension to what is otherwise the funny and fluttery gay stock character stereotype. Sadly, Damian doesn’t get a solo number to express his inner feelings and complexities the way his bestie Janis Sarkisian (Barrett Wilbert Weed) does. With “I’d Rather Be Me,” Weed belts to the rafters, telling off all the haters with zeal.

Of course, the “Art Geeks” Janis and Damian are not innocent bystanders or entirely pure characters. No one in Mean Girls — nor in life — is all good or all bad, all bully or all victim, prey or predator. That said, no other characters more fully epitomize the show’s takeaway message about celebrating individuality amidst diversity than that of its two leading outcasts. It’s a message heard loud and clear by show’s end, with the rousing group number “Here (You Can Sit With Us).” Fitting, because, as it turns out, a musical version of Mean Girls is entirely worth sitting with. Tina Fey has succeeded in making “fetch” happen.

Mean Girls runs to Dec. 3 at The National Theatre, 1321 Pennsylvania Ave. NW. Tickets are $48 to $128, although the National holds a ticket lottery before each show, and individuals may submit their names at the box office to win up to two tickets at $25 each. Twenty lottery seats are available for each performance, with names drawn 90 minutes prior to the show. Call 202-628-6161 or visit thenationaldc.org.

Read: Our original review of the 2004 film Mean Girls. 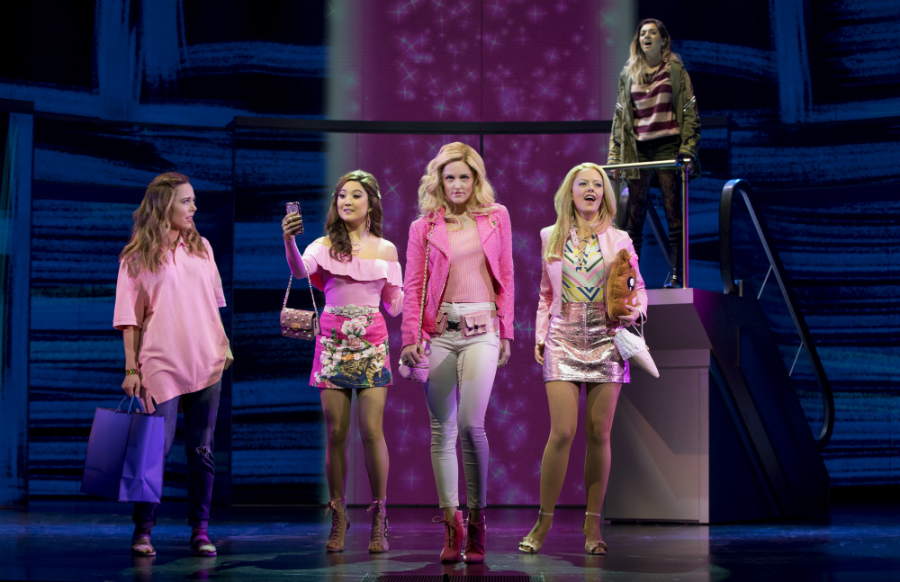