Robert Schenkkan's compelling exploration of Lyndon B. Johnson offers a lot of food for thought

Context is everything. There is no way to watch the bullying and manipulation of Lyndon Baines Johnson without thinking about another enormous personality currently in the White House. And it raises a rather pointed question: is it okay to be a bastard if it’s for the right reason? And then comes the next question: who’s to say whether a reason is right?

Thankfully, playwright Robert Schenkkan refuses to weigh in on either question in The Great Society (★★★★★) and it’s his restraint that makes his retelling of this not-so-distant history so compelling. Indeed, the challenge he grapples with is not just making sense of the chronology, but capturing the complexity of the decisions of a presidency and the speed at which they must be made. His interest is in the chess game — the way in which pieces gain and lose their powers and the times when someone or something just knocks the board right off the table. But the art here is that — when he chooses — Schenkkan also delivers the raw, human emotion that reminds us that the game in Washington is always for keeps. Be it voting rights, poverty, gun control or war, the decisions of a president can destroy lives.

Picking up roughly where the 2016 production of Schenkkan’s All the Way left off, and now in his second — and this time elected — term, life for LBJ has become complicated. Dr. Martin Luther King Jr. is pushing for legislation to protect African American voters unjustly kept from the polls, but Johnson faces a skittish Congress. The Vietnam war is accelerating nowhere fast, but his advisors have an answer for his every concern and a convincing reason for every requested escalation. And, as always, the political hounds are at the door, with all and sundry vying for power and position — and a future shot at the presidency. If Johnson is still his witty, persuasive, dominant self, he is a rocket beginning to experience serious drag. And as the complications mount, he is haunted by the tragedies of protester deaths and the young soldiers killed in Vietnam. This time, Schenkkan’s Johnson is angry, tempered, and, by play’s end, resigned.

If it sounds like a lot to capture in the space of an evening, it is, and part of the skill here is in Schenkkan’s choices of when and where to zoom the lens. It’s a balancing act between keeping LBJ up close and personal and the suggestion of pivotal historical events, and Schenkkan largely gets it right. If the second act begins to fuzz a little around the edges, well, so does Johnson’s presidency, and there is just too much here of interest for it to matter.

Thanks to the return of director Kyle Donnelly, this is a fabulously tight ship. The sets are minimal and move quickly between crowd scenes one minute and deep dives into Johnson grappling with his adversaries the next. Complementing effectively are Aaron Rhyne’s carefully chosen original footage and evocative silhouettes projected high into the eves and Nancy Schertler’s potent lighting. But there is far more to Donnelly’s vision than managing history: on the two occasions when she stops time to remind us of the heartbreaking loss of young American men, the moments she paints are gutting.

As thoughtful as the production is, the play is only ever going to be as powerful as its LBJ, and Jack Willis makes a triumphant return in a role he owned in 2016. Does he sound right, walk right, and glower with the right slant? Who cares? This was never going to be about mimicry. It’s about creating a sense of a man, painting him so vividly that every moment feels — if not exactly real — then like the most vivid memory or waking dream. He and Schenkkan are delivering a what-might-have-been (and in the case of speeches, actually was) with the urgency of imagination, intelligence and plenty of research. It is funny, incredibly witty, deeply evocative and immensely fascinating.

Of course, there were all manner of “personalities” besides LBJ, and the ensemble cast does a great job of bringing some dimension to the people who come and go as events dictate. But, as in 2016, there are a few who join Wallis in truly setting the tone. Wonderfully agitated in the most buttoned-down of ways, and offering great chemistry with Wallis’ bull, is Lawrence Redmond as Hubert Humphrey. Returning in the role of Dr. Martin Luther King, Jr. is Bowman Wright, who again maintains effectively the pained concern and quiet intensity of this passionate leader. As LBJ’s overworked secretary and Coretta Scott King, Deonna Bouye is wonderfully understated and compelling in her every move.

The bottom line is that The Great Society is as entertaining and informative a glimpse of recent political history as you are likely to get on a D.C. stage. And for those in any way flummoxed by this nation’s latest choice of leader, it’s a whole other kind of food for thought.

The Great Society at Arena Stage 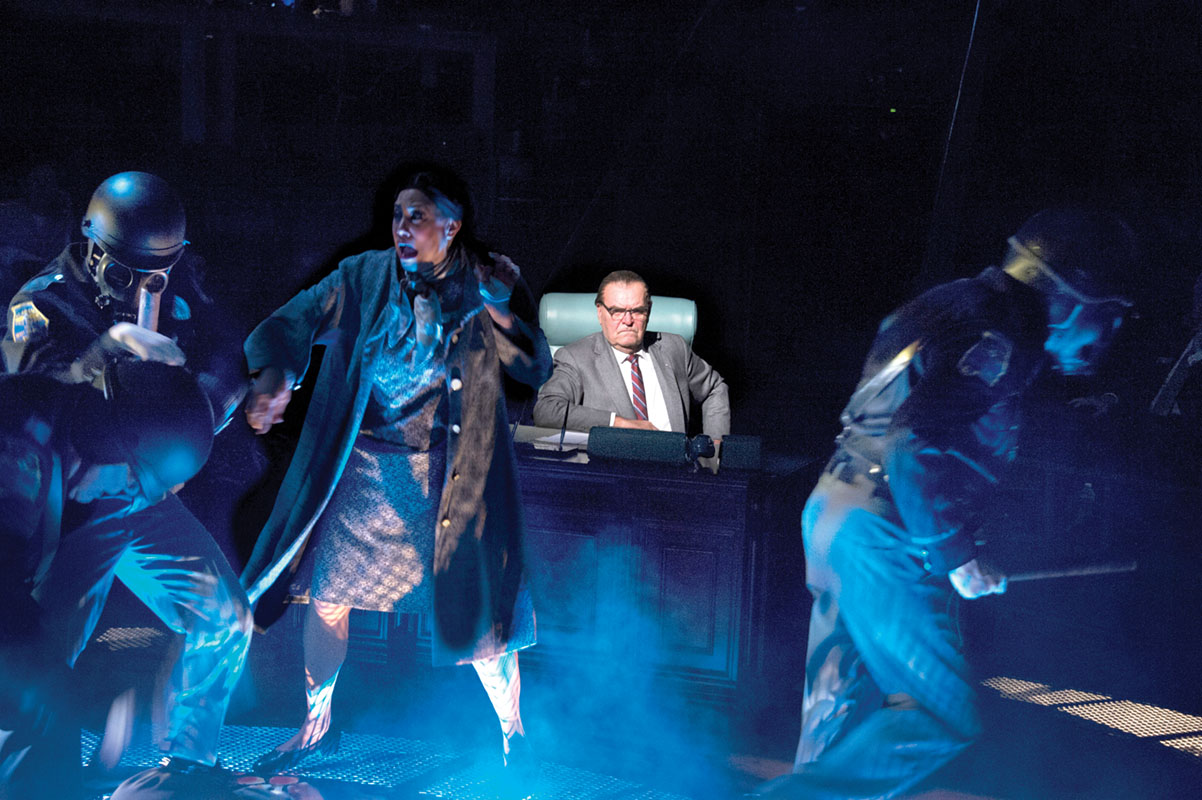