It’s all superheroes on deck as Marvel finally ushers in the biggest, baddest threat of all in Avengers: Infinity War 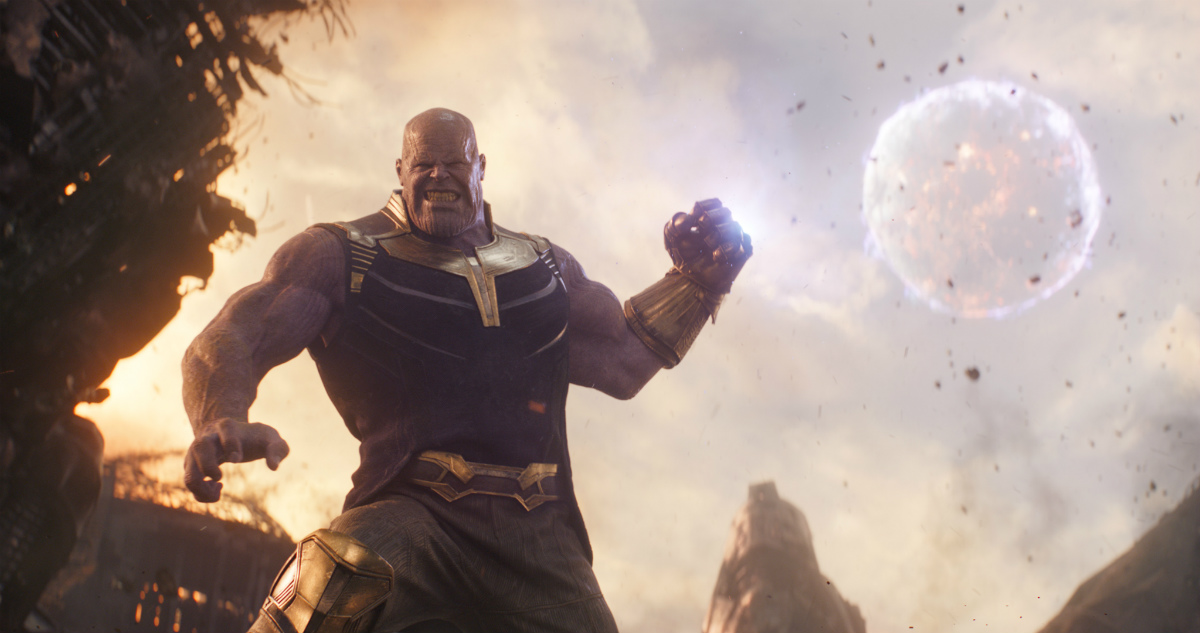 It would be nice to report that Marvel’s Avengers: Infinity War is a thrilling standalone superhero spectacle, but it clearly doesn’t intend to be. The film is thrilling, droll, and suspenseful, and dominated by a compelling villain, the muscle-bound blue Titan known as Thanos (Josh Brolin).

But as a second sequel to 2012’s The Avengers, and the culmination of 18 prior films in a vast, profitable cinematic universe, Infinity War (

) unfolds like the first chapter of a big finish, and it doesn’t stand alone. The action-packed, all-star epic, directed by brothers Joe and Anthony Russo (Captain America: Civil War), has been made with the assumption that viewers will share some history with these characters, just as the characters share deep, emotional bonds with one another.

Fortunately, the film does not assume that even a genius like Tony Stark (Robert Downey, Jr.) has kept up with every storyline across the MCU, from Iron Man a decade ago to this year’s pop culture phenom Black Panther. The brisk, bantering script by Civil War screenwriters Christopher Markus and Stephen McFeely offers a few helpful refreshers for those who haven’t mapped out the exact location of each of the six, powerful Infinity stones that have been scattered throughout the Marvel movies.

Thanos has been hunting down the stones since before he was introduced in an end-credits scene of the first Avengers. He holds two in his gauntlet of power and if he holds them all, he could use them to rewrite reality as he sees fit. If Thanos has to kill every Avenger and Guardian of the Galaxy, and destroy half the universe, to get his giant blue mitts on all six stones, that’s what he’s prepared to do.

Actually, that’s his plan. Thanos believes the universe is overpopulated and under-resourced, and by decimating half the beings in existence he can restore balance. He’s even test-marketed his theory on one poor planet, and claims the half who are left live in peace and prosperity under his dominion. Who can argue with those results? 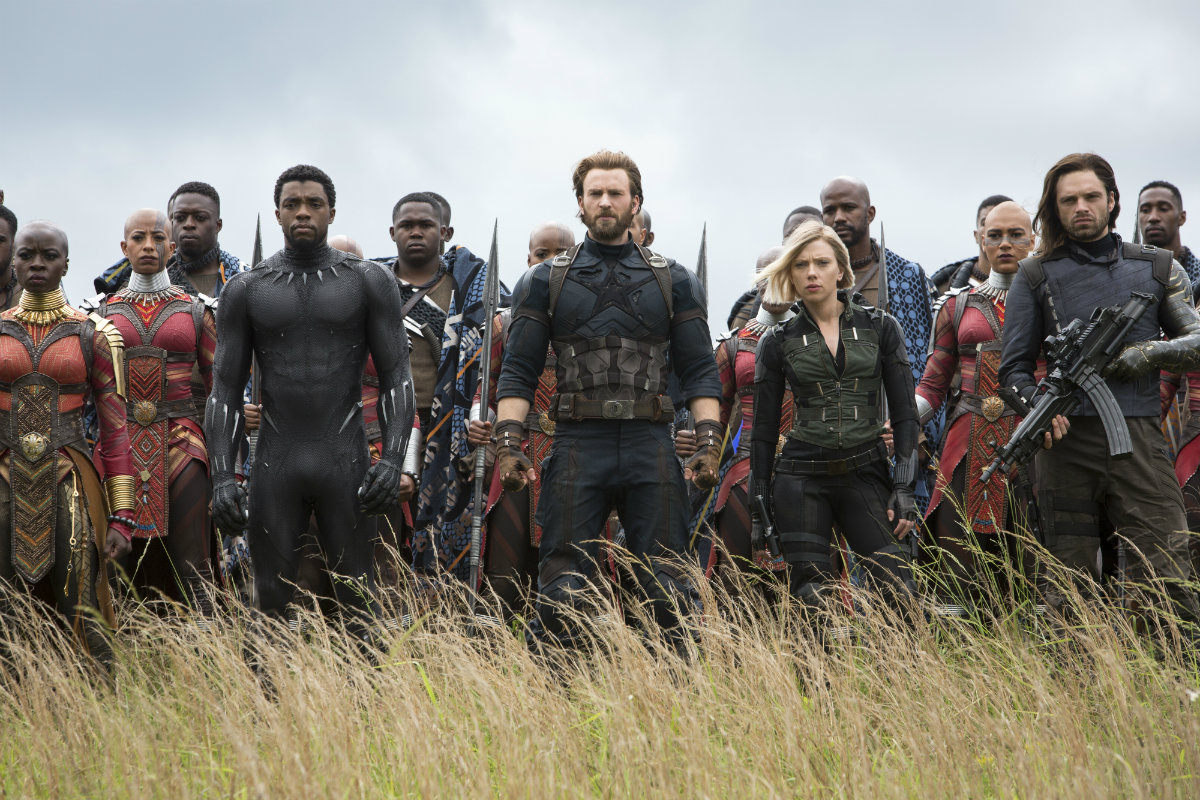 How all these heroes meet is a matter of much interplanetary maneuvering, from the Guardians’ ship zipping through an asteroid field, to Iron Man and Spidey fighting off an attack in Manhattan’s Washington Square Park. In the tradition of action sequels from The Empire Strikes Back to The Return of the King, the Russos drop us into a saga-in-progress with little buildup and practically no further explanation of who’s who among the heroes introduced in prior pictures.

Whether one knows where Hulk/Bruce Banner (Mark Ruffalo), last seen in Thor: Ragnarok, has been or what he’s been up to, the expression on his face when he sees Black Widow (Scarlett Johansson), last seen in Civil War, is enough to understand what they mean to each other. This is what Marvel has done so much better than their rival DC: use the mythology they’ve created in the films, not just in the comic books.

Thor and Loki (Tom Hiddleston), brothers of Asgard and occasionally brothers-in-arms, have six films’ worth of history that’s expressed richly in Hemsworth’s and Hiddleston’s performances. Holland and Downey, Jr. likewise have honed an amusing, poignant rapport between teenage wall-crawler Spidey and his snarky but caring mentor Stark.

Abetted by spot-on casting, Marvel and the studio’s small army of different directors and screenwriters have done a fantastic job over the past decade bringing dimension to these relationships. Drawing on those bonds, even minor players in Infinity War, like Wakanda’s formidable general Okoye (Danai Gurira), or the Guardians’ sometime nemesis Nebula (Karen Gillan), distinguish themselves as important contributors to the emotion and ethics of the story at hand, not just the heroics. 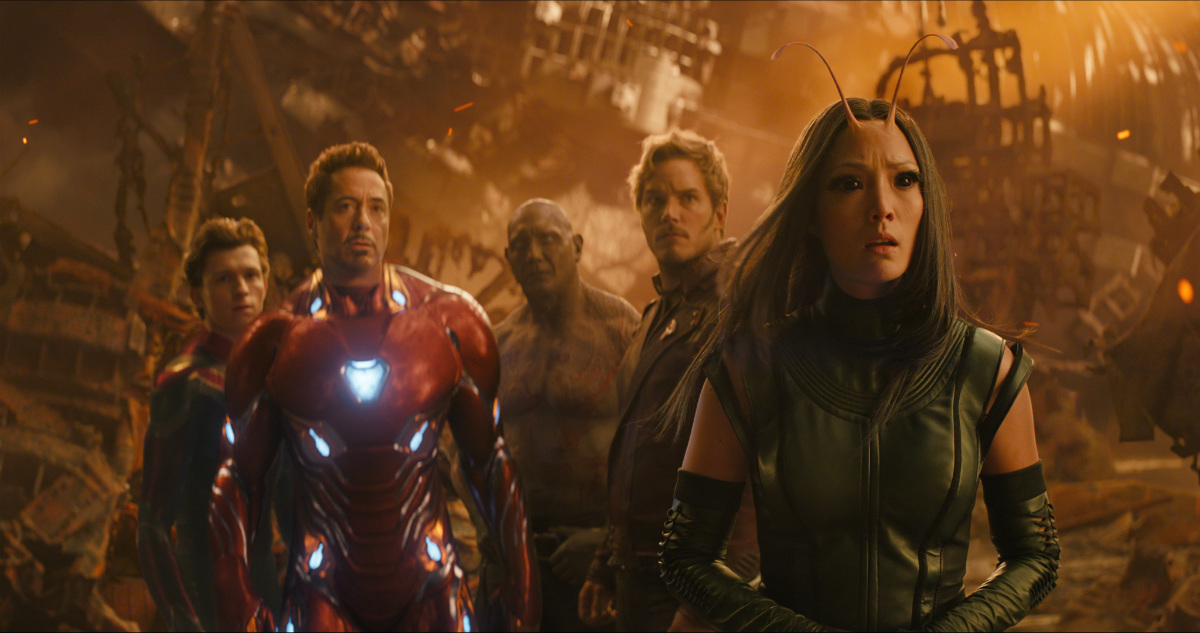 Nebula is one of the daughters of Thanos, along with the Guardians’ Gamora (Zoë Saldana), who might hold the key to Thanos’s ultimate downfall — or triumph. The family drama they play out is surprisingly heartfelt, thanks in part to Brolin’s excellent turn as a crushingly cruel but not quite evil bad guy.

One might say Thanos is a multifaceted megalomaniac, not above cracking a joke, or shedding a tear. If there’s been one consistent complaint about the MCU films it’s that the villains have rarely been as interesting as the heroes, and this bad guy breaks that mold. Also, the fully motion-captured, CGI concoction looks good and threatening, genuinely made of flesh and blood.

In fact, the film looks marvelous throughout, if not as stylishly colorful as Taika Waititi’s psychedelic Ragnarok. Conjuring out of substance and pixels the myriad locations, from Thanos’ dark home planet to the interstellar regions of Knowhere, the art directors have outdone themselves. And the movie sounds great, too, as the Avengers and Thanos thunder through the cosmos supported by Alan Silvestri’s stirring score.

Marvel has gone to great expense to assemble an audio-visual spectacle worthy of fans’ collective investment of time and money, and the Russos deliver. A stellar team of heroes join in battle, some of them falling courageously, and somehow nearly every story that’s been started in this cinematic universe gets serviced. That’s no small feat for a series that centers on more than a dozen different characters, and yet still manages to make every one of them count.

Editor’s Note: You may want to pay the premium to see this one in Dolby Vision, which boasts truly astounding surround sound.

André Hereford covers arts and entertainment for Metro Weekly. He can be reached at ahereford@metroweekly.com. Follow him on Twitter at @here4andre.
← Previous Story Tom Holland adorably trips up on RuPaul’s Drag Race question
Next Story → Film Review: Rachel Weisz and Rachel McAdams enact a compelling seduction in “Disobedience”