By all accounts, Samuel Beckett seems to have enjoyed being as obtuse as possible about Waiting for Godot (★★★★★). His seminal, absurdist play is considered one of the most significant of the twentieth century, and indeed, in 1955, just two years after its premier, Beckett is attributed with the almost mischievous remark, “Why people have to complicate a thing so simple I can’t make out.” His later responses — especially to actors trying to make sense of the characters Vladimir (aka Didi) and Estragon (aka Gogo) — only compounded this “simplicity.”

For Beckett scholars and fans, the ambiguity and pointed refusal by the author to explain his work fuels a happy fervor. But what, one must ask, about everybody else? How does one approach a play that — never quite real, never fully surreal, often comic, but also tragic — simply refuses to explain itself?

Perhaps the best answer is two-fold: expect nothing and allow anything. In that frame of mind, there may arise a something. In a perfect world, it will be personally moving, intriguing, or thought-provoking. Perhaps it is finding that, in watching the clever, agitated Vladimir and the weary, absentminded Estragon spin their wheels waiting for the mysterious Godot, their cycles of frustration, boredom, and futility begin to deliver something larger. Perhaps it is the sense that humankind is caged in a timeless continuum, bound to the knowledge of our impending nothingness, pumping at worthless metaphysical brakes. And while the days are long and the years are short, the point of it all is like a twilight’s flicker in one’s peripheral vision — you sense it’s there, but if you look, it’s gone.

And yet, for another viewer, Godot might speak to some wholly different idea. Perhaps, being creatures of the twenty-first century, one can’t help but notice how the play works as a metaphor for the latest mind-bending discoveries in physics. Consider what Godot seems to say about time and what we now know about its physical properties — it is no longer conceptualized as linear or even uniform. Consider Beckett’s language and how the words move in meaning depending on who says what, when, and to whom. Such shifting sands are not unlike the subatomic particles we now know “exist” in two ways at once — even if we can only “see” one. Could the two men be struggling with time and memory because they are like such particles existing in a multi-universe? Are such connections sheer gobbledygook — especially since the play was written before such discoveries? Perhaps, and Beckett might have been the first to say it. But he also said that his “work does not depend on experience — [it is] not a record of experience. Of course you use it.”

If all this potential for pontification induces a (non-existential) dread of an evening waiting for Godot to end, rest assured that deep thoughts are optional with this production by Druid, the acclaimed Irish theater company. If the cosmos doesn’t speak to you, you can take it all at face value and simply enjoy the clever wordplay, the antics reminiscent of Laurel and Hardy, the thoughtful intimacy, and the quietly mounting despair. Indeed, the cast delivers the play with such skill and crystalline timing, and Garry Hynes’ direction is so keen and crisp — as mystifying as Godot may be in its grand design — the actual, in-the-moment aspect is wholly worth the experience.

And it’s a fresh kind of flair that makes such a difference here. There is something a bit younger, even a bit hipper and relevant about this lanky Vladimir and bearded Estragon. Perhaps it’s the vague feeling that, if they weren’t immersed in this world, they might be running a microbrewery together, juggling radishes, or breathing fire in their spare time. It gives their antics a certain “street” zest, an ever-so-slightly unpredictable energy — and it’s a vibe that cleverly resets notions of the play. As Vladimir, Marty Rea revels in his comic exaggerations, but also captures — with fine craft and wit — Beckett’s rich ironies and this man’s increasing despair. As Estragon, Aaron Monaghan delivers the perfect blend of vaguely-agonized deadpan and utter bewilderment. Crucially, the two couldn’t have better chemistry, their banter joyfully in sync, the tenderness as Vladimir takes Estragon’s hand momentously genuine and authentic.

As the strangely troublesome visitors to the pair’s patch of wasteland, Pozzo and his servant Lucky, Rory Nolan and Garrett Lombard inject a pitch-perfect sense of chaos and frisson. If Nolan takes a few beats to get into his stride (and waffles a bit between an Irish and English accent), he finishes with an ideal blend of the desperate, entitled, and unhinged. As Lucky, Lombard is splendidly, subtly sinister (despite the wig giving him the look of Drew Barrymore post-binge) and his monologue almost steals the show. Any fans of the 2004 Battlestar Galactica’s Hybrid will thrill to the similar urgency Lombard generates in his delivery, the sense of catastrophe coming like the overheating fuel rod in a nuclear reactor.

If we are no closer than Didi and Gogo to answers, and if Godot will forever remain an existential mystery or mirror, the experience of it here is a rich and lasting moment in time.

Waiting for Godot at Shakespeare Theatre 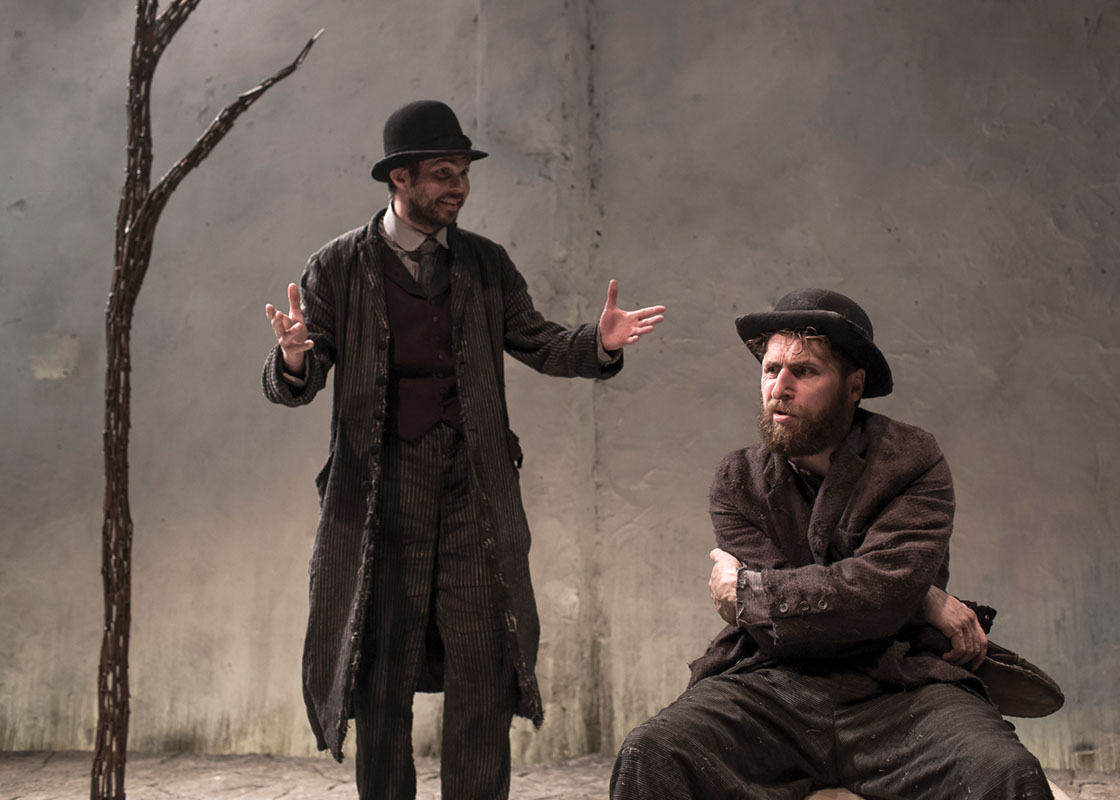