Stage Review: “Botticelli in the Fire” at Woolly Mammoth

A reimagining of Renaissance painter Sandro Botticelli and the events which led him to throw his paintings on the fire after embracing the teachings of a populist preacher, Botticelli in the Fire (★★★) offers both too much and too little.

Historical accounts haven’t revealed much of the man behind such fifteenth century masterpieces as The Birth of Venus and Primavera, and it leaves Botticelli’s story wide open for interpretation. If playwright Jordan Tannahill wants to make him as gay as the day is long, why not? He might well have been. If he layers eras like transparencies — twenty-first century loft-dwelling urbanites meshing with Medici Florence — again, why not? Such are the imaginative flights that make for fascinatingly original theater.

But if Tannahill delivers joyful irreverence and playfulness in these overarching choices, when it comes to their execution, the hand gets overly heavy. Put simply, Botticelli and company are conceived as full-on urban camp, complete with calling each other “girl” and — especially in Botticelli’s case — playing to the audience with that rather all-too-familiar bitchy kind of sass. It may be witty and downright funny at times, but it all feels a bit… ’90s.

Being bored rather than shocked by a flamboyantly gay character may be a victory for societal acceptance, but it doesn’t make for a compelling play. Botticelli may react and declare and flounce, but other than one or two brief moments of reflection (and Jon Hudson Odom’s riveting presence), there is little here to convince.

Prime example is his supposed profession. If there is endless expository on what a profound partier Botticelli is, surely his working hours must have been equally intense. But there is no sense here of the concentration, frustration and elation that must have filled his many hours at the canvas, nor how he shared it with his workshop students. And he would have been master of far more than his libido: he would have been engaged with the work of his predecessors and contemporaries; fascinated by his tools, palette and craft; steeped in the history of art; deeply knowledgeable of mythology, symbolism and beyond.

Watching this Botticelli circle, but never quite touch, his paintings and brushes (other than in anger) while smirking over the endless references to his partying, gives the impression of a man playing at being a painter.

And his relationship with the only student shown, a young Leonardo da Vinci (James Crichton), barely registers. They have no real conversations about life, no chemistry, no credible daily banter. By the time Leonardo makes his passion play, it feels contrived, not exciting. If the suggestion here is that Botticelli’s attentions inspired Leonardo, endangered him, and then saved him — well, okay, but good luck convincing an art historian (and the less said about their final toe-curlingly awful peanut butter moment, the better). Equally skimmed is Botticelli’s supposedly immense friendship with Poggio di Chullu (played with appropriate boisterousness by Earl T. Kim).

If there is one exception, it is the supremely artful staging and light play during the unfolding moment when Botticelli and Leonardo consummate their love. It does absolutely nothing to show their chemistry or bond, but it does provide a wonderful origin myth for Leonardo’s understanding of anatomy.

Yet Tannahill seems to have had deeper goals. At the beginning, Botticelli lays down a gauntlet: the universal fear of death. He later sets the stage for deeper contemplation with dire choices, pyres, and dungeons. But there is never a true reckoning of the initial premise. When Botticelli’s mother Madre Maria takes him in her arms to bathe him (in his moment of personal crisis), it is intimate and extraordinary because almost nothing beats an evoking Dawn Ursula, here as Maria. But if Maria tells us intriguing details of his early (sexual) life, Botticelli himself stays almost silent. What a prize moment to give something more of his inner life. And when an imprisoned Leonardo monologues his despair, the moment is dulled, not just by his obtuseness, but by the fact that we barely know him. Such are the chances to touch a nerve, but they are missed.

Check for discount tickets to Botticelli In the Fire

Still, if the depth is lacking, there is plenty to watch. Odom brings an incendiary fire to his portrayal, sparking with confidence, anger, warmth, and humor. It’s goes a long way to deliver some texture to a character who needed more from his creator. Playing it boldly with an attractively annoyed edge, Alyssa Wilmoth Keegan delivers a charismatic Orsini, the Medici woman on whom Botticelli models his Venus. As a credible modern incarnation of Lorenzo de’ Medici, Cody Nickell is enjoyably abrasive and mercurial. Finally, as Girolamo Savonarola, the preacher who presses Botticelli into following his creed, Craig Wallace offers an interesting blend of the personable and commanding.

Approach Botticelli in the Fire as Tannahill’s idyll and not an exploration, and you will be entertained, if not moved.

Botticelli in the Fire at Woolly Mammoth Theatre 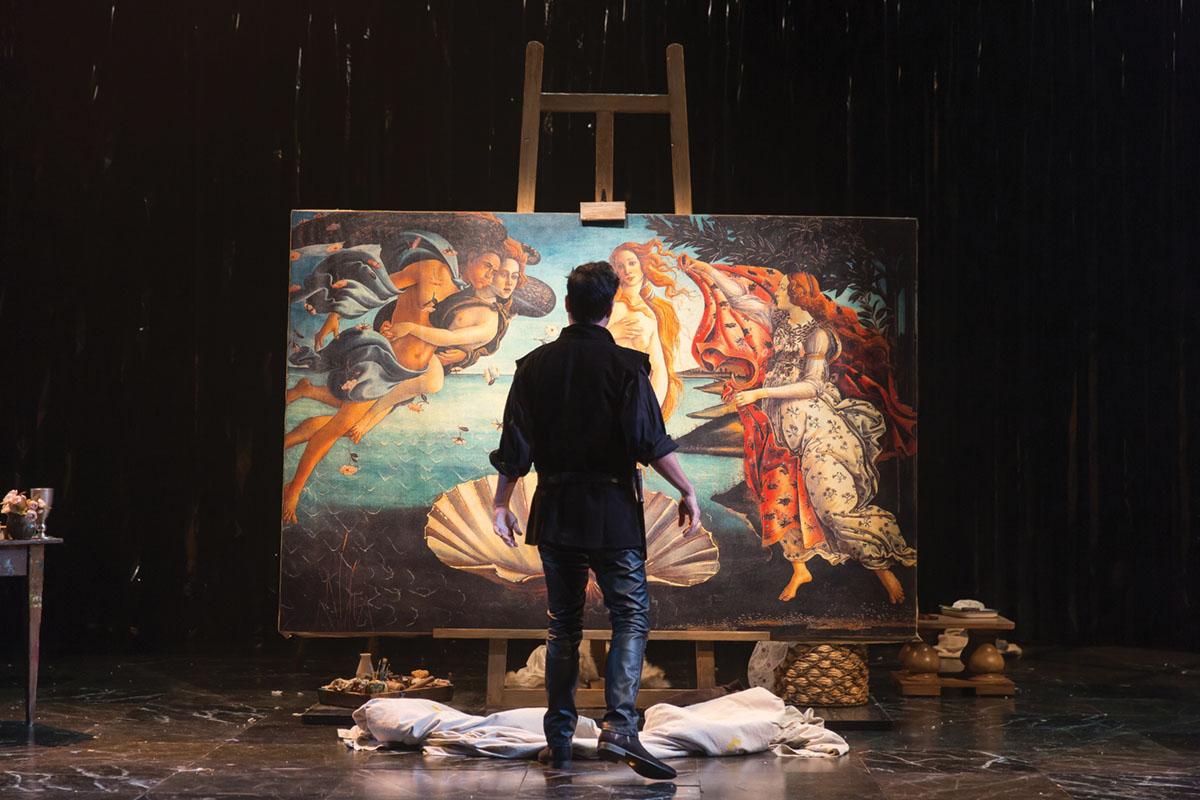