Supporters and opponents of I-77 dig in their heels, but Councilmember Mary Cheh says a compromise could be in the works 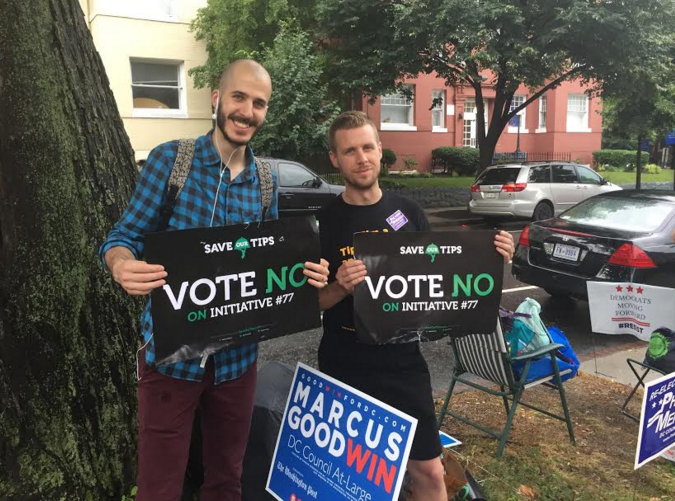 Campaigners for the “No2DC77” campaign outside a polling place on Election Day. – Photo by John Riley

The D.C. Council has filed a bill to repeal Initiative 77, a recently-approved ballot measure that eliminates D.C.’s tipped-wage system.

Under the measure, the hourly wage of tipped employees would gradually increase to $15 an hour by 2026, while eliminating the two-tier wage system where tipped workers accept a smaller hourly wage and supplement the remainder of their income in tips.

Initiative 77 was approved by 55.74% of D.C. voters in the June 19 primary election. There was broad support for the measure across the District, with low-income and majority-minority precincts overwhelmingly voting to approve the wage hike, which seeks to ensure that tipped workers will earn the same hourly “living wage” as non-tipped workers, with tips being rewarded based on exemplary service.

But many tipped workers came out publicly against the initiative, arguing that, under the current system, their tips after a night of serving or bartending, coupled with their hourly wage of $3.89 an hour, exceed the current citywide minimum wage (for non-tipped workers) of $13.25. They also noted that D.C. law already requires employers to make up the difference if an employee fails to earn enough tips in a night to exceed the $13.25 per hour minimum wage.

Prior to the primary election, all 7 co-introducers had come out in opposition to the bill, along with Mayor Muriel Bowser (D), Attorney General Karl Racine (D), and Councilmembers Robert White (D-At-Large), Brianne Nadeau (D-Ward 1), Charles Allen (D-Ward 6), and David Grosso (I-At-Large).

Mendelson issued a statement through a spokeswoman explaining his decision to introduce the legislation.

“Overwhelmingly, tipped workers do not like the initiative,” he said in the statement. “They believe — strongly — that the unintended consequence of the initiative will be to reduce their pay. The phrasing of the initiative on the ballot unquestionably was misleading. And every contested incumbent on the same ballot opposed the initiative, yet won their primary. So it is not a surprise that a bill would come forth. And there will be a hearing early in the fall.”

Nadeau issued a statement explaining why she is not co-sponsoring the repeal bill.

“Raising the minimum wage in the District is an issue I’ve worked collaboratively on over the last several years, as a champion of the increase to $15 as the Council passed legislation two years ago. I heard then, as I continue to hear now, from tipped workers who support a tipped minimum wage,” Nadeau said. “Those voices have always been the guiding force behind my opposition to Initiative 77. And while I didn’t support this initiative at the ballot box, Ward 1 voters did.

“The bill introduced today would be a full repeal of the initiative, which I do not feel comfortable with, and did not co-sponsor. However, I plan to remain an active participant in the discussion around this issue, as the bill moves through the legislative process,” she added. “My sincere hope is that there is a path forward that addresses the concerns of the tipped employees I’ve heard from, that will ensure fair wages, and will help our tipped industries continue to thrive.”

The One Fair Wage DC coalition, which pushed for passage of Initiative 77 and whose members included the New York-based pro-union group Restaurant Opportunities Centers United, issued a statement warning the Councilmembers not to repeal the measure, noting the measure’s 11.5-point margin of victory and its widespread support throughout the city.

“D.C. voters followed Initiative 77 closely in the media and online. They saw through the barrage of misinformation by industry-backed front groups and lobbyists with deep pockets,” One Fair Wage DC spokeswoman Diana Ramirez said in a statement. “On June 19, they spoke unambiguously. We call on Council to respect their decision and proactively implement One Fair Wage in D.C.

“It would be deeply undemocratic for Council to overturn the will of the people. D.C. voters don’t like it when Republicans in Congress do it, and we trust Council will not stoop to that level,” Ramirez added. “In our pre-election poll, over 80% of D.C. voters said they would be concerned if Council overturned their vote. The people are watching. Council must set any sour grapes aside and push ahead.

“We know from the experiences of other cities and states that paying One Fair Wage in D.C .will reduce poverty and sexual harassment. Take-home pay — wages plus tips — will increase here just as it has elsewhere,” Ramirez concluded. “We will fight any efforts to prevent D.C. workers from reaping these benefits and likewise stand prepared to work collaboratively with Council and stakeholders to ensure a smooth and gradual implementation of One Fair Wage in DC.”

The No2DC77 coalition, which included thousands of tipped workers and the National Restaurant Association, praised the Councilmembers for introducing the repeal legislation.

“Tipped workers and local community small business establishments, staff and operators are delighted that a majority of the D.C. Council is standing with tipped employees, and has introduced legislation to repeal Initiative 77. We look forward to that legislation enjoying additional support from Councilmembers who opposed the elimination of the tipped wage system in the District,” Mark Lee, a spokesman for the No2DC77 told Metro Weekly.

Lee added that it is not uncommon, from a historical perspective, for the D.C. Council to “exercise leadership” by intervening to amend or repeal voter-approved initiatives.

“The important thing about the Council’s action today is that does several things. It clears up any confusion that this misguided proposal will be allowed to stand,” Lee said. Because as we’ve already seen, tipped employees are reporting that they are receiving fewer tips or reduced tips because patrons think the law is already in effect. And also, local small business owners hoping to open new businesses, including in underserved areas of the city, have been told by bankers, lenders, and private investors that they will not invest in new hospitality projects in the District until this matter is decided, because it’s a business-killer.”

When asked about the possibility of political retribution by supporters of One Fair Wage against councilmembers who vote for repeal, Lee dismissed such political rhetoric as “empty threats.”

“ROC has been threatening tipped workers with the loss of their income and livelihood, through the elimination of the tipped wage system, for the past five years,” he said. “So I’m sure that D.C. servers and bartenders in the city would say to D.C. Councilmembers, ‘Welcome to the club.'”

Because the repeal bill has the support of a majority of councilmembers, its passage would not be surprising, particularly if councilmembers added amendments to increase enforcement of existing laws regarding wage theft, or institute harsher penalties for employers who are cheating their employees. But Councilmember Mary Cheh (D-Ward 3), a supporter of Initiative 77, said she’s heard discussions among her colleagues about the possibility of a legislative compromise.

“There’s an interesting dynamic going on, which is to say, even thought there were enough Councilmembers who expressed opposition to the initiative before it was voted on, now it’s been voted on, and the fact is that the initiative was approved. So there may be some councilmembers who might be reluctant to overturn the voter of the people,” she said. “So, I have heard some talk about a compromise so we could preserve the principle of Initiative 77, and at the same time, provide some relief for the restaurant industry so that both sides could benefit.

“One compromise that’s been floated that seems to make the most sense would be along these lines: instead of letting the initiative be implemented within eight years, let it be implemented in 15 years,” Cheh explained. “This would certainly give the restaurant industry, which is worried about the jolt to its business model if this is carried out, a really, really soft landing toward the One Fair Wage initiative. If you took the current wage for tipped workers and raised it to $15 over 15 years, that would mean that restaurants would only have to raise their tipped workers’ pay by less than a dollar [about $0.74] a year. Surely, the adjustment could be made over that time. And it would preserve, and ultimately get us to, the fair, moral position of one wage for all.”

Cheh noted that studies have shown that tipping has not decreased in the seven jurisdictions where tipped and non-tipped workers receive the same minimum wage. So, despite some reports of patrons who have refused to tip their servers or bartenders, she does not believe the problem is widespread.

“Have you ever been in a restaurant, gotten your bill, and wanted to figure out the tip, and called over your server and asked, ‘By the way, what’s your minimum wage?’ Nobody does that,” she said. “It’s the restaurant industry that’s been selling this idea that these folks would lose their tips if this was adopted. It has not happened elsewhere.

“And so, if you give them good service, people will continue to tip,” Cheh concluded. “Now, people who may not want to tip, or are cheap, or whatever they are, maybe they’ll say, ‘Hmm, maybe I shouldn’t tip.’ But over the long road, in places where this has happened, tips are as vibrant and robust as they’ve ever been.”

John Riley is the local news reporter for Metro Weekly. He can be reached at jriley@metroweekly.com
← Previous Story Brother, Help Thyself is accepting applications for grants and awards
Next Story → Gay DC bartender claims Uber driver kicked him out of car due to homophobia