By John Riley on November 6, 2018 @JohnAndresRiley 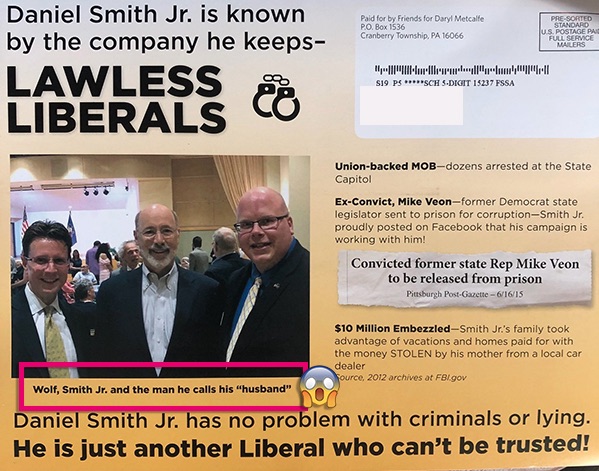 An anti-gay Pennsylvania state representative who has made headlines for his homophobic comments and stated opposition to homosexuality is under fire for launching a last-minute mailer attacking his openly gay opponent in the days prior to Election Day.

State Rep. Daryl Metcalfe (R-Cranberry Township) sent out a mailer attacking Democrat Daniel Smith, Jr., calling him out for being endorsed by “liberal gay activist groups and unions,” reports Pittsburgh CBS affiliate KDKA. The mailer attempts to link Smith with a former Democratic state representative who went to jail for corruption, and alleges that his mother embezzled money from a local car dealer and spent it on vacations and homes.

The mailer also shows a photo of Smith with Democratic Gov. Tom Wolf — who is hated by conservatives — and Smith’s husband, although Metcalfe refers to the man as “the man he calls his ‘husband.'”

Asked by KDKA’s Jon Delanto how he felt when he learned about the mailer, Smith said: “I felt sad that we’re in a world, especially when what happened over the weekend, someone has to resort to something like that.”

Metcalfe, for his part, defends the mailer, including the use of quotation marks around the word “husband,” stating: “Marriage is between a man and a woman.”

Smith says Metcalfe is ignorant and can’t ignore his legal marriage, even if he disagrees with it.

“Him being a politician, he should know that that’s the law of the land,” Smith says. “That’s where we are now. There’s no quotes around it, he’s my husband.”

But Metcalfe says some voters in the district will care about the issue, arguing that Smith opened the door when he accepted support and money from “gay activist groups” like the LGBTQ Victory Fund and Equality Pennsylvania.

“The majority of people that believe that marriage is between a man and a woman, I think some of them will certainly make a decision on what he’s advocating for and who’s supporting him,” Metcalfe added.

But Smith, himself a former Republican, says the attack shows how desperate Metcalfe is.

“Obviously, he doesn’t have a good record to fall [back] on, so he has to go this personal, and it’s unfortunate,” Smith says. “But I’m just hopeful, actually I’m confident that the people of this district, this isn’t who they are.” 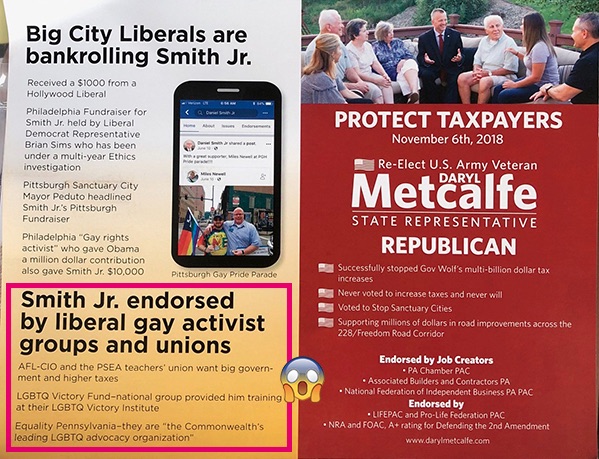 Metcalfe has previously butted heads with Democrats due to his near-obsession with issues of sexuality. In 2013, he invoked a rarely-used legislative rule to gag openly State Rep. Brian Sims (D-Philadelphia) from talking about a pro-LGBTQ decision handed down by the Supreme Court in U.S v. Windsor, arguing that Sims’ remarks were “open rebellion against God.”

In 2013, he called for the impeachment of former Attorney General Kathleen Kane for refusing to defend Pennsylvania’s statutory ban on same-sex marriage. In 2015, after the Supreme Court legalized marriage equality nationwide, he accused the justices of “judicial tyranny” setting themselves “above God’s law, natural law and the will of the people across this country.”

Last December, Metcalfe made headlines after he overreacted to State Rep. Matt Bradford (D-Worcester Township) briefly laying a hand on his arm while trying to argue a point about a bill in committee, alleging that Bradford had homosexual tendencies.

“Representative Bradford,” Metcalfe said, “Look, I’m a heterosexual. I have a wife, I love my wife. I don’t like men, as you might. But stop touching me all the time. .. [I]f you want to touch somebody, you have people on your side of the aisle that might like it. I don’t.”

Notably, Metcalfe’s fellow lawmakers laughed at the absurdity of the charge, though the lawmaker insisted in an interview with the Pittsburgh Post-Gazette that Bradford’s touching his arm could constitute a form of battery.

John Riley is the local news reporter for Metro Weekly. He can be reached at jriley@metroweekly.com
← Previous Story Barbra Streisand records message urging LGBTQ people and allies to vote
Next Story → 2018 Elections: Number of LGBTQ Congressmembers rises to 9