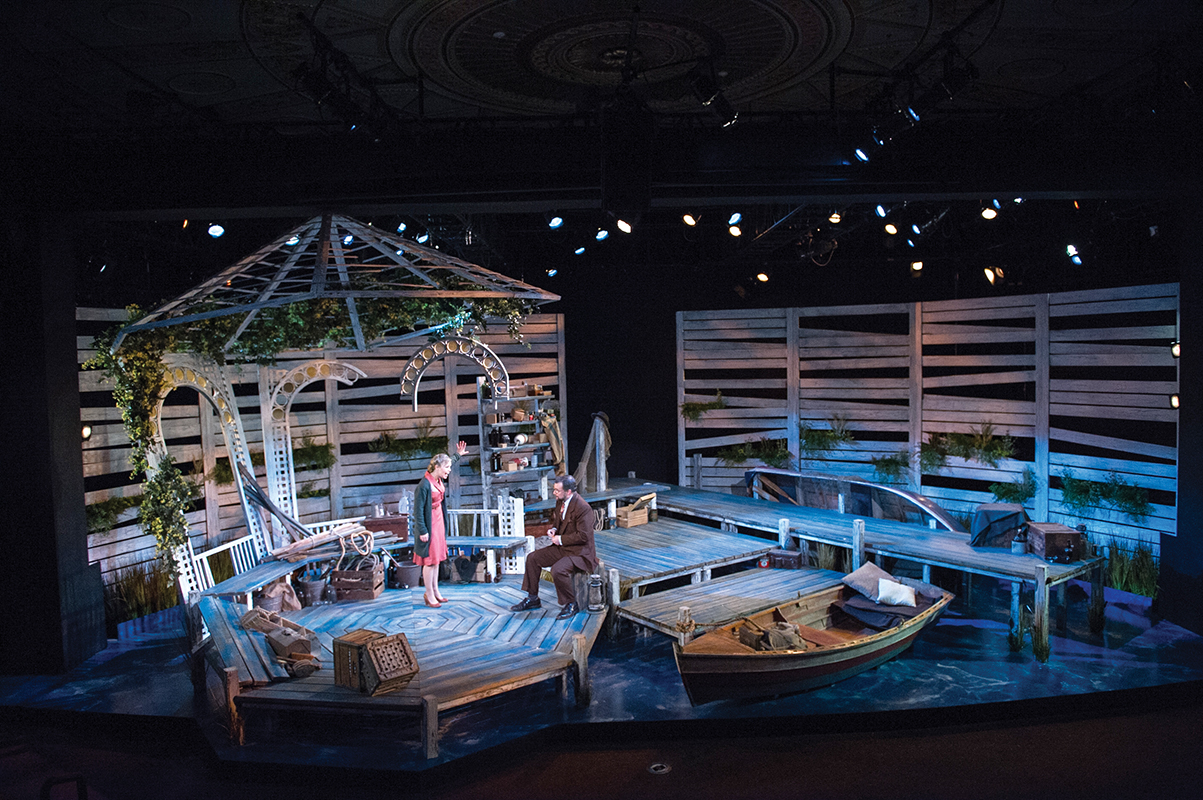 Inside a boathouse under a moonlit night in Missouri, a couple anxiously tests the waters of a potential future together in Lanford Wilson’s Pulitzer Prize-winning Talley’s Folly (★★★).

Aaron Posner’s new production tenderly evokes the warm, summer evening, the creatures calling out on the river, the firm sense that this boathouse, built to resemble a gazebo, definitely was the place where accountant Matt Friedman (John Taylor Phillips) and nurse’s aide Sally Talley (Erin Weaver) fell in love.

But Matt and Sally don’t stand in mutual agreement about whether they are a couple, or ever could be one in the world they know. Maybe Sally really isn’t in love, or can’t admit it, because it’s 1944 and she’s a Midwestern WASP from a rural factory-owning family that might never accept her having more than a friendship, or even that, with a foreign-born Jew like Matt.

On this July evening, Sally and Matt are a year removed from what he calls their “affair,” a week they spent meeting secretly in the boathouse. Weaver and Phillips capture that passage of time, and the fondness that grew inside it. Sally and Matt’s teasing debates, and flatout fights, relay the familiarity the lovers forged in private, hidden away from her ever-present family. Hypocrites and fools, she calls them.

Sprawling across the GALA Hispanic Theatre stage, scenic designer Paige Hathaway’s boathouse and jetty is packed with details of a family’s history, but still makes for a dreamy refuge from Sally’s bigoted relations.

What refuge could keep them safe, though, from every hateful relation and stranger in Missouri and beyond? There is none, which would seem to be the sad point of Matt’s family’s history, revealed in a profoundly embellished tale that he shares with Sally. And she has her own checkered past too that could come back to haunt them.

So perhaps love is their refuge. Wilson’s beautifully seesawing script allows them glimmers of hope, and some aid from an unlikely corner. Secrets they’ve been keeping from one another spill out somewhat clumsily, both for their sakes and for the sake of this show, but the suspense hanging over that boathouse is in whether they’ll grab onto a lifeline together.

Weaver and Phillips, like Sally and Matt, take the journey in real time, and with a piercing conviction in this otherwise unfussy production of a sweetheart of a romance.

André Hereford covers arts and entertainment for Metro Weekly. He can be reached at ahereford@metroweekly.com. Follow him on Twitter at @here4andre.
← Previous Story Theater Review: The Importance of Being Earnest at Everyman Theatre
Next Story → A refreshed John Waters Christmas returns to the Birchmere