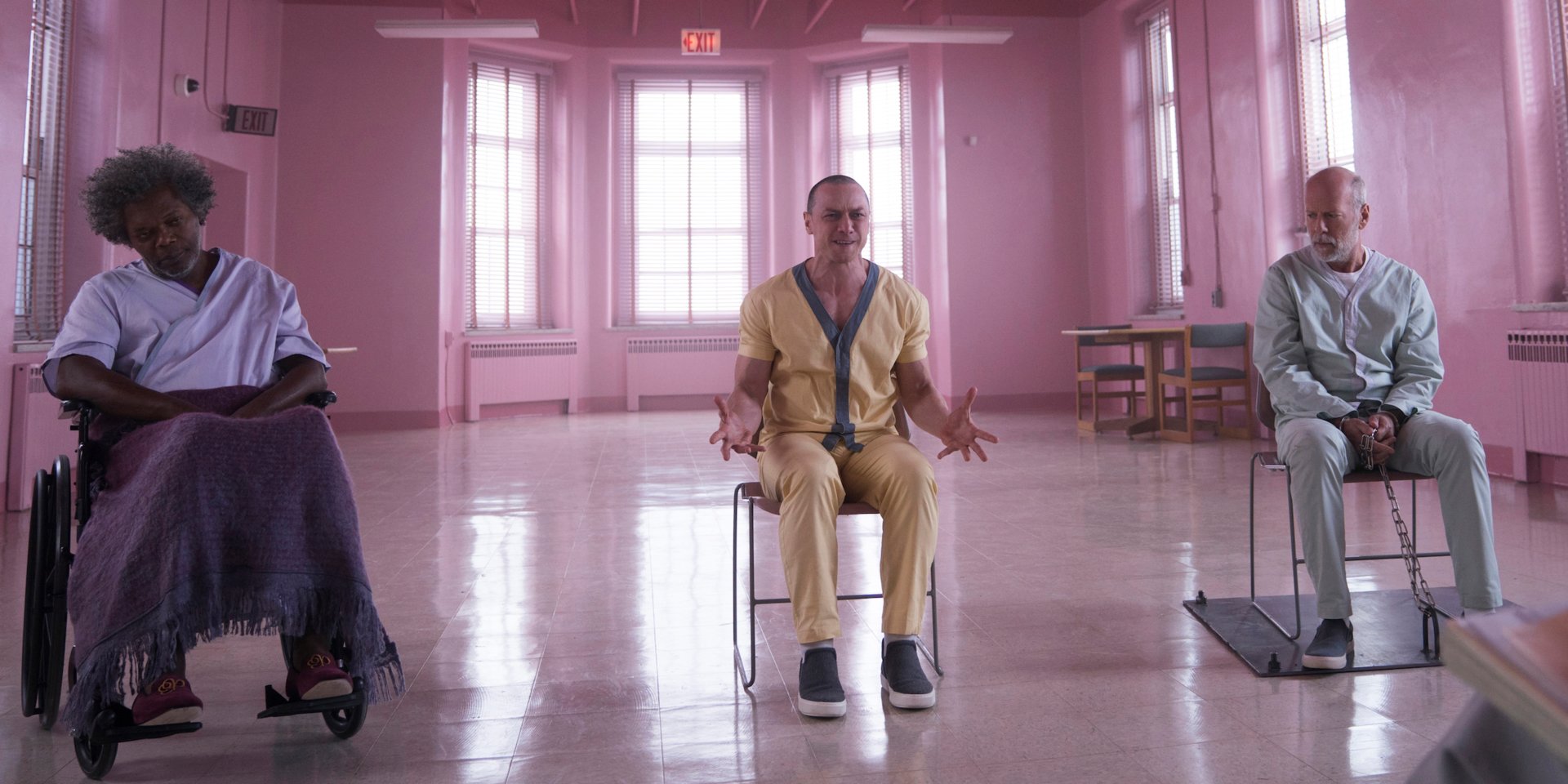 You’ll find no spoilers here on whether or not M. Night Shyamalan’s thriller Glass snakes its way around to a Shyamalanesque final twist. However, consider it not a spoiler but fair warning that the film decidedly does not stand alone.

) continues the storylines of the Shyamalan’s nearly 20-year old cult favorite Unbreakable and his 2016 surprise hit Split, and it wastes little time recapping what went down in either film.

It swiftly reintroduces David Dunn (Bruce Willis), the everyman who discovered he was a superman in Unbreakable, and Kevin Wendell Crumb (James McAvoy), the killer who kidnapped and terrorized three teenage girls in Split. Super-strong good guy Dunn and very bad guy Crumb, controlled by his multiple personalities and horrific urges, are set on a trajectory destined to meet in an explosive head-on collision, and any viewer unfamiliar with one or both previous films might feel left out in the cold.

But any and all can bask in the dazzlement of McAvoy’s quicksilver performance. Jacked up to muscular, Bane-sized proportions, and able to will his body and features into appearing physically different, McAvoy shuttles impressively through Crumb’s 24 personalities, including 9-year old Hedwig, prim Englishwoman Patricia, and the villain known as the Beast, the identity all the others fear or worship.

A few of the personalities in the so-called Horde that control Crumb are actually quite charming. Unfortunately, Shyamalan and McAvoy lean too far in that direction, having decided, along with many Split fans, that this kidnapping, cannibalistic murderer is just a wild and crazy guy. Crumb and company still terrorize everybody, plus teenage girls, but he’s played heavily for laughs and sympathy. The side effect is that the mercurial Crumb becomes predictable, and the yuks undercut the scares, of which there are a handful.

Much of the film’s suspense lies in a sequence that finds Crumb locked inside a mental institution under the care of Dr. Ellie Staple (Sarah Paulson), a therapist who specializes in treating those who suffer from the delusion that they possess superhuman abilities. Dr. Staple and her pseudo-science aren’t the suspenseful part, though — everything to do with the good doctor and her laughably unorthodox methods comes off as nonsense. But she is responsible for bringing together Crumb and the one they call Mr. Glass, Elijah Price (Samuel L. Jackson), the wicked, brittle-boned nemesis of Dunn’s in Unbreakable.

Jackson doesn’t have much to do portraying the catatonic Elijah, but he and Shyamalan have a swell time teasing the possibility that the apparent vegetable poses greater danger than Dr. Staple or her staff might conceive. Even mute and confined to a wheelchair, Jackson conveys that some terrible storm could be brewing behind Elijah’s twitching eyes. It’s only a matter of time, and plot manipulation, until the truth is revealed.

The movie stumbles making it to that finish line, and it digresses from its straightforward tale of Dunn versus Crumb into a strange, philosophical trip about whether comic book superheroes might exist among us.

Shyamalan deploys a Greek chorus composed of other returnees from the prior films — Elijah’s mother (Charlayne Woodard), Dunn’s son, Joseph (Spencer Treat Clark), and Crumb’s escaped victim, Casey (Anya Taylor-Joy) — to explain how various plot points perfectly fit the playbook of comic book superheroes and villains. With this trio deconstructing the movie’s plot while it’s happening, Glass more than makes up for skipping the exposition at the beginning by throwing in way too much near the end.

Lost in the shuffle is Willis’ taciturn strongman Dunn. As a brooding vigilante bashing criminals and street thugs under cover of darkness, cloaked in his I Know What You Did Last Summer-collection rain poncho, Dunn seems to have found a purpose since his Unbreakable awakening. But the movie squanders that with all of its Dr. Staple mumbo-jumbo. Consequently, Willis, who gave a brilliantly understated performance in Unbreakable, appears not just reserved, but bored. Understated gets run over like roadkill in the path of McAvoy’s, and Shyamalan’s, showy shenanigans.

André Hereford covers arts and entertainment for Metro Weekly. He can be reached at ahereford@metroweekly.com. Follow him on Twitter at @here4andre.
← Previous Story Nadine Labaki on capturing truth in her moving drama “Capernaum”
Next Story → Reel Affirmations’ monthly LGBTQ film screening is moving to Landmark’s E Street Cinema