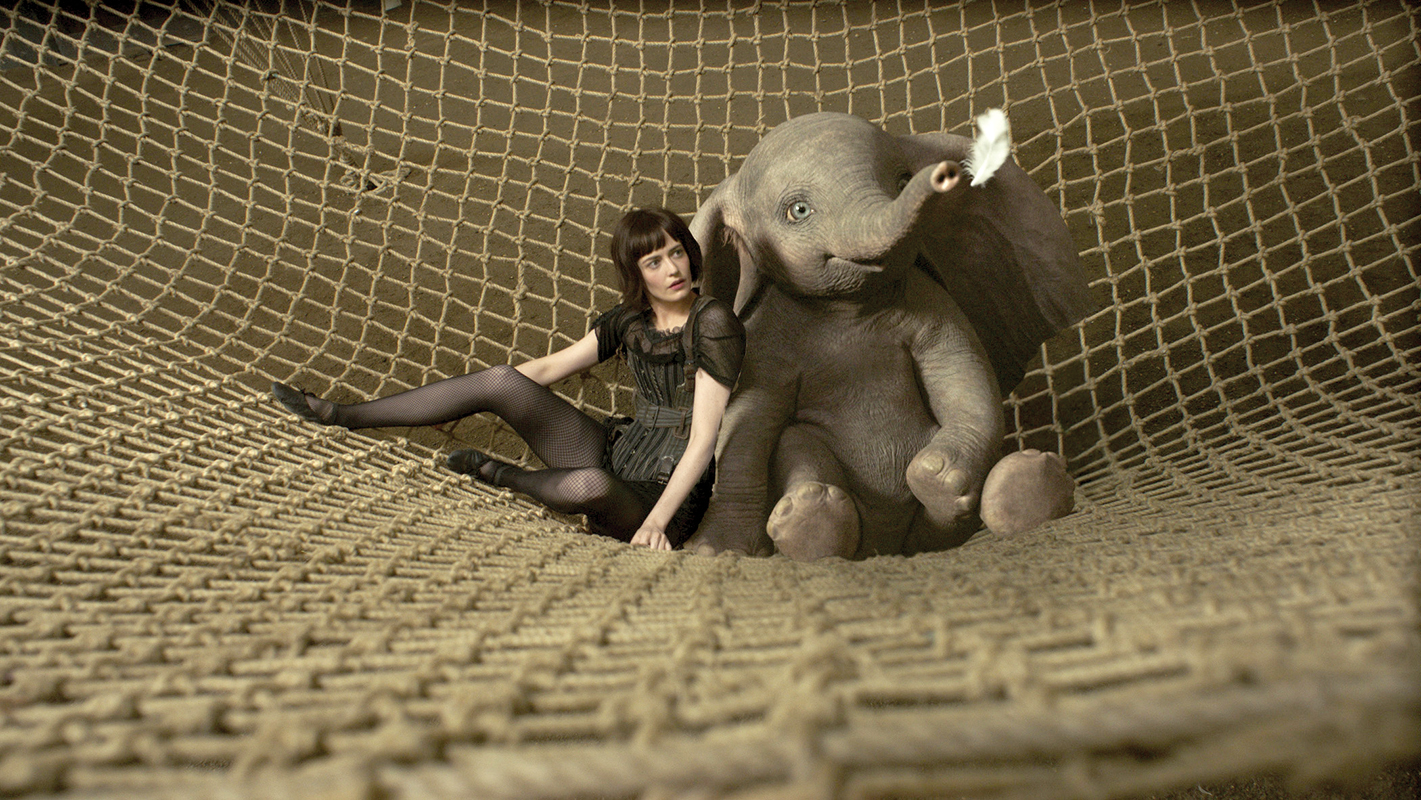 In an odd turn for a live-action remake of the talking-animals tearjerker, this adaptation, directed by visual stylist extraordinaire Tim Burton, feels more firmly grounded in human drama. The famous flying elephant seems a supporting player in his self-titled tale, upstaged somewhat by the family redemption journey of World War I vet Holt Farrier (Colin Farrell) and his two precocious children, Milly (Nico Parker) and Joe (Finley Hobbins). The resulting recalibration leaves Burton’s Dumbo feeling not as wondrously transporting as the original, although the film does render a touching portrait of a family reconnecting post-trauma.

Once the stallion-riding star of the Medici Brothers Circus, Holt has returned from the war a decorated hero, yet a damaged man, in body and spirit. He lost an arm in combat, while, at home, he and the kids lost his wife to illness. Adding insult to injury, gruff but lovable circus owner Max Medici (Danny DeVito) sold off Holt’s prize horses, so if the single dad wants to keep his job in the circus, he’ll need to get off his high horse, so to speak, and start cleaning up after the elephants.

Burton and screenwriter Ehren Kruger (Transformers: Age of Extinction) pour substantial energy into developing the hardscrabble, post-War environs of the Medici Circus, which, like haggard Holt, has seen better days. Burton presents a colorful, boisterous country caravan of big tents, dusty animal pens, and claptrap railcars, populated by a misfit family of performers and exotic beasts (almost all of them computer-generated).

But a cloud of sadness hangs over this carnival, and over the unfortunate Farrier family. Farrell, trying on a decent Kentucky twang as “One-armed Cowboy” Holt, offers a tender take on the humbled hotshot, and creates a poignant father-kid rapport with credible young actors Hobbins and Parker.

As science-obsessed Milly, Parker (daughter of actress Thandie Newton and film director Ol Parker) supplies the spunky personality and well-meaning ambition that fans of the original might better associate with Timothy Q. Mouse. Here, it’s Milly and little bro Joe who help inspire Dumbo to ever greater heights, after they and dad discover that those floppy ears can take the little elephant aloft.

The visual effects team achieve a genuine sense of physical weight and dimension for Dumbo that adds to the suspense preceding the CGI pachyderm’s plunges off towering platforms and other fearsome heights. His whizzing flights over the bigtop audience capture the crowd’s collective awe and excitement.

Yet, the film never really feels fun. Rather, it strikes a melancholy chord similar to that of another recent Disney “live-action” reboot, Christopher Robin. Despite a general brightness, and DeVito’s sardonically comic performance — and, you know, a flying elephant — this Dumbo seems short on whimsy and gaiety, the cartoon lightness that makes a big-budget balloon like this fly. The film’s last-act trip to an anachronistically high-tech amusement park called Dreamland, “where the impossible is possible,” adds spectacular visuals, without adding much to the story other than the quasi-villainous baron of Dreamland, V.A. Vandevere (Michael Keaton).

The film’s detour to Dreamland also introduces a love interest for Holt, and potential mother figure for the children, in the form of high-flying trapeze artist Colette (Eva Green), who hatches plans to ride Dumbo in her act.

The idea of any grownup riding Dumbo is not one of this update’s welcome innovations. A few other updates to align this version of 1919 with the cultural zeitgeist of 2019 are more welcome, though clumsily executed. Milly’s girl-power pronouncement that she wants to be respected for her mind sounds conspicuously like a literal response to focus group comments, as does a different character’s pronouncement that caging wild animals is morally wrong. More naturally integrated are the heartwarming stories of these two charming families, one human, one elephant, who rely on each other to overcome tremendous losses, and to help make all their dreams take flight.

Dumbo is rated PG, and is now playing in theaters everywhere. Visit www.fandango.com.

André Hereford covers arts and entertainment for Metro Weekly. He can be reached at ahereford@metroweekly.com. Follow him on Twitter at @here4andre.
← Previous Story Film Review: Jordan Peele’s ‘Us’
Next Story → Film Review: Hotel Mumbai