It has taken more than two decades for the Washington National Opera to stage Tchaikovsky’s Eugene Onegin (★★★★), and as such there will many so happy to see it, they won’t care what the critics say. For those who are slightly less obsessive, suffice to say this production is a subtle gem — lovely, even with a few flaws.

The story itself is a simple one: the self-important Onegin spurns the love of a young country girl, finds life does not go according to plan, and lives to regret his arrogant choices. With very little plot contrivance, this is truly and deeply about the mood and the music, and WNO’s production most certainly gets this right.

Though the sets and lighting feel a tad bland at first — especially in the opening scene, with its flattening absence of color, stark trees and thick carpet of autumnal leaves — as the story progresses both become increasingly captivating. It all stays minimalist, but it serves to gradually focus the mind and senses where they belong: on the increments of story and emotion and, of course, the music. We may not be witnessing a festival of Russian-themed knick-knacks and furniture, but at least we won’t be wondering what came on loan from the embassy. And if the lighting starts unobtrusively, it emerges as one of the most beautiful aspects of this production. A stunning example is a scene in which a lovely, hazy sun rises on the body of a man who, just moments ago, had been singing heartbrokenly at the thought of missing another day. Simple, understated, deeply affecting.

The WNO orchestra is incredibly alive and vibrant under the hand of conductor Robert Trevino. Everything works magnificently, from the dark intensity of the strings to the magical whimsy of the harp. There is grandeur in this emotional despair and a gratifying clarity, and the orchestra captures it all. To be utterly frank, there are a few times when the orchestra delivers when the voices can’t.

Less consistently wonderful are a couple of directorial choices. If Peter McClintock maintains an austere feel and choreography that matches the immensity of the music, he allows this Onegin to be too wooden early on when we need to see some dimension. Whether one believes that Onegin finally acknowledges his character flaws versus suffering a very Russian form of FOMO, we must believe there is a living, breathing man here. Without an instant, definable sense of him, there is no credible basis to imagine how he could be gripped by emotion, be it noble or otherwise. Also problematic is a very slow first scene in which there is a bit too much of everything — the women overplay the chatting and chores in the garden and there is too much fussy movement and simpering when the new male neighbors arrive. Luckily, this gives way to a far stronger vision later.

Baritone Igor Golovatenko sings the role of Onegin with absolutely gorgeous tone and expression, to the point where it is almost at odds with his buttoned-down demeanor. When he rejects the love of the young Tatiana, he offers little more than an imperious silhouette and it’s the same when he flirts with his friend Lensky’s girlfriend, Olga, forcing a life-changing duel. This is a selfish and blinkered man and we need a bit more swagger and personality to make sense of his behaviors and to believe, finally, that he can suffer. The decision to give Golovatenko a brief bare-chested “Putin” moment (as he changes clothes on stage), distracts more than it adds.

As Tatiana, Anna Nechaeva is convincing as the young women who grows feverishly infatuated with her new neighbor. Indeed, it is her long scene during the night where she writes a letter declaring her love that — in retrospect — brings such poignancy to later events. It is also rather provocative, in a 21st century kind of way, to note how Tchaikovsky dwells on her powerful song of joy, dread, and excitement only to virtually ignore her story until the opera’s end. She has landed on her feet, but we learn nothing of the intervening years except the intriguing knowledge that she has carried a nonsensical torch. In counterpoint to her strong acting, her voice is — at least in earlier scenes — not quite enough for the orchestra, though she comes into her own later and offers some sweetly melancholy sound.

As Lensky, tenor Alexey Dolgov sings his best in his aria before the duel, but the blue, pre-dawn light is as much a part of the moment’s power. As Olga, Tatiana’s frivolous sister, Lindsay Ammann is rather cliched in her acting, but she has quite an exciting mezzo-soprano.

Rounding out the cast, Victoria Livengood slightly over does the old nurse Filippyevna, but sings with texture and expression, while Elena Zaremba carries Tatiana’s mother Madame Larina with much poise. Almost stealing the show is Eric Halfvarson as Gremin, Tatiana’s older husband, singing his song of late-life love with a sonorously velvet, yet commanding voice.

Even with its uneven moments, Eugene Onegin is a rare Russian treat. 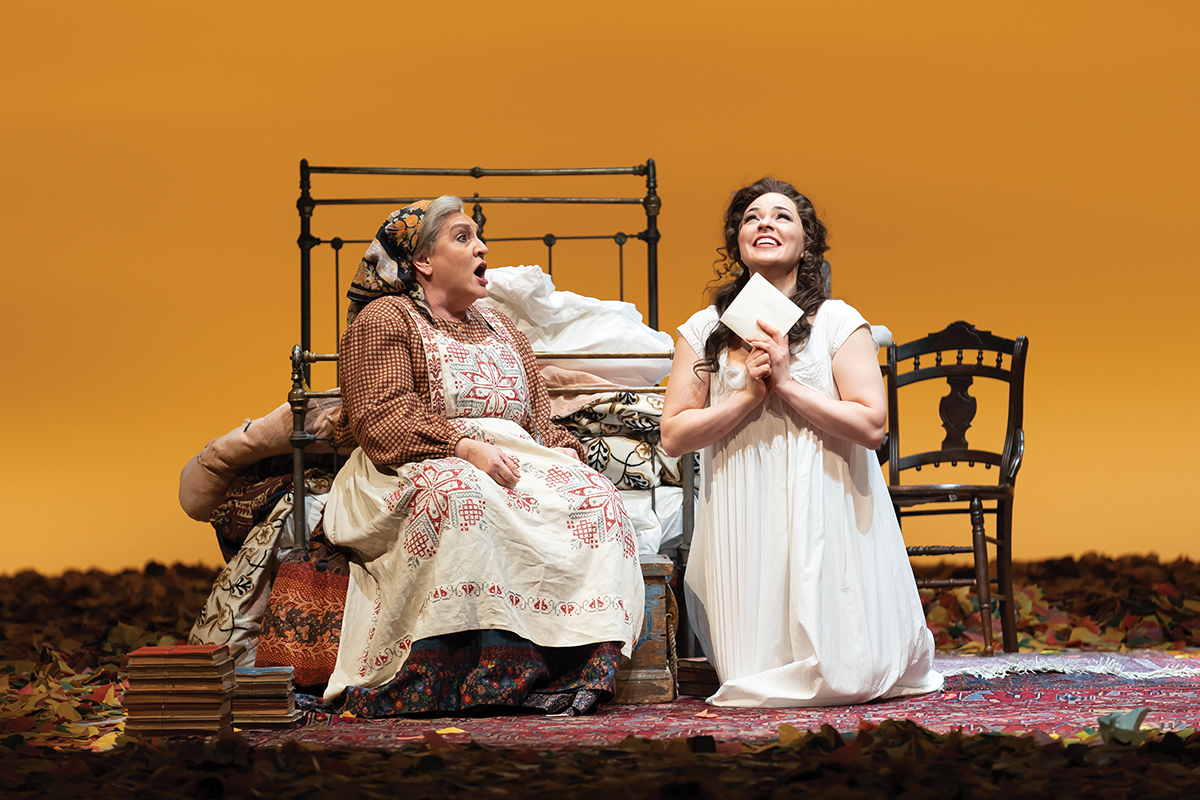