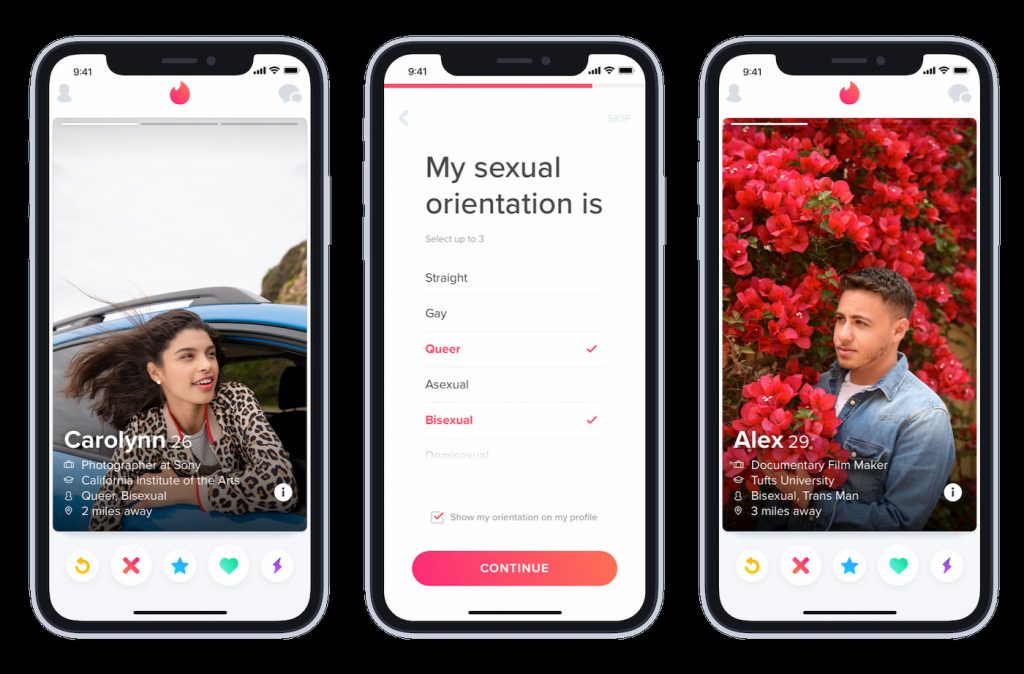 Dating app Tinder is releasing an update that will allow users of the service to select up to three different sexual orientations.

The update, developed in conjunction with LGBTQ media advocacy organization GLAAD, is designed to provide greater inclusivity for users by allowing them to choose the orientations they best identify with.

Users were previously limited to heterosexual, gay, and bisexual options, with Tinder offering “men,” “women,” or “both” under the “orientation” setting.

Now, users will be able to choose from Straight, Gay, Lesbian, Bisexual, Asexual, Demisexual, Pansexual, Queer, and Questioning, to fine-tune how they identify.

New users will be offered the options when signing up for a profile, while existing users can edit their profile to change their orientation.

Users will also be able to show their sexuality on their profile, and choose to show profiles that match their orientation options first.

The update will be rolling out in the U.S., U.K., Canada, Ireland, India, Australia and New Zealand throughout June.

“We want all of our users to feel empowered expressing who they are while connecting with new people — and we’re always working to make that easier for our users on Tinder,” Elie Seidman, CEO of Tinder, said in a statement. “Dating apps are invaluable platforms for connecting the LGBTI community, and we’re beyond proud to continue our efforts, in partnership with GLAAD, to improve the community’s experience on Tinder.”

Tinder said that the orientation options could evolve over time, based on feedback from users.

Rich Ferraro, GLAAD’s Chief Communications Officer, said Tinder was continuing to show “a dedication to inclusivity with updates that reach millions of people and create safer spaces for LGBTI users.”

Earlier this year, Tinder celebrated after its campaign for more diverse emojis led to the creation of interracial same-sex couple emojis.

The Unicode Consortium, which manages and publishes the standard upon which all emoji are based, introduced more options for couple emojis, allowing user-selectable skin tones for both same-sex and opposite-sex couples.

It came after Tinder launched a petition on Change.org pushing for more diversity in dating emojis.

“While emojis for people of color and same-sex couples both became a reality in 2015, one group of people is still excluded from emoji representation: interracial couples,” Tinder wrote in the petition. “Isn’t time all love was represented?”

Jenny Campbell, CMO of Tinder, said she “couldn’t be more proud” of the new emojis.

“Tinder advocates for the freedom of people to live how they want to live and love who they want to love,” Campbell said. “The success of our Interracial Couple Emoji campaign shows how powerful the voices are of the more than 50,000 people who joined our cause by signing our petition; together, we effected change and ensured visual representation for interracial couples around the world. I couldn’t be more proud of this incredibly positive outcome.”

In 2016, Tinder also introduced a More Genders option, after a report found that trans users were experiencing rampant transphobia, with many being reported and even banned from the app.

Then-CEO Sean Rad acknowledged that “there’s a transgender community on Tinder and we haven’t done enough to give them a good experience.”

He added that including the More Genders option was “not only good for the Tinder community, but it’s the right thing to do for the world.”