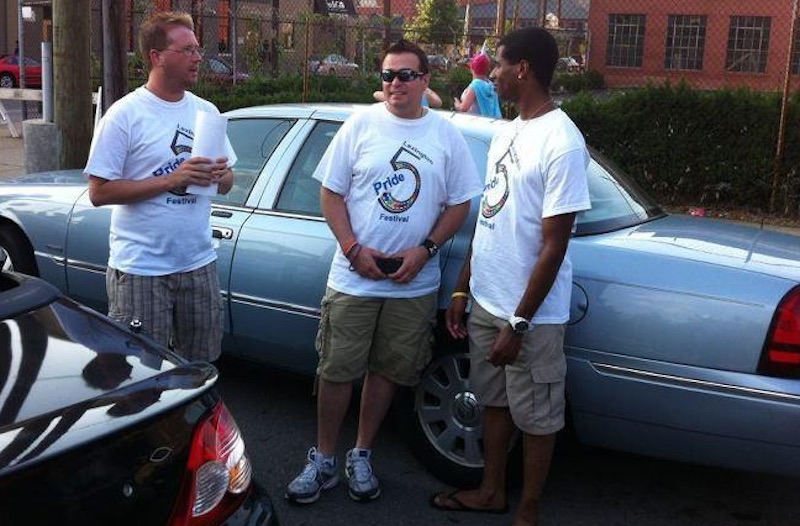 On Friday, the Kentucky Supreme Court heard oral arguments in the case of the owner of a T-shirt printing shop who was accused of violating Lexington’s nondiscrimination ordinance after he refused to make T-shirts for the 2012 Lexington Pride Festival.

The case centers around the question of whether Blaine Adamson, the owner of Hands On Originals, refused to print the T-shirts because of the sexual orientation of a customer — the Gay and Lesbian Services Organization — or because he disapproved of the “message” of the shirts.

Adamson claims the T-shirts, which read “Lexington Pride Festival” and had a large number ‘5’ consisting of a repeating pattern of rainbow colors inside the number to signify the festival’s fifth anniversary, were an implied endorsement of homosexuality and same-sex marriage that violated his personal religious beliefs.

His lawyers, with the anti-LGBTQ organization Alliance Defending Freedom, have argued that the “service” that Adamson provides by printing shirts is the promotion of messages, thus making his refusal a freedom of speech issue, reports the Lexington Herald-Leader.

But the Lexington-Fayette Urban County Human Rights Commission found Adamson and Hands On Originals had violated the city’s Fairness Ordinance, which prohibits discrimination based on sexual orientation. The commission has argued that the company sells goods or services to the general public, and thus, can’t refuse to provide those goods or services to all people equally, regardless of individual characteristics, such as race, gender, national origin, or sexual orientation.

The case initially went before the Fayette County Circuit Court, with Judge James Ishmael reversing the commission’s decision, saying that the company had not violated the ordinance. Ishmael further argued in his ruling that Hands On Originals had declined to print the T-shirts “because of the message advocating sexual activity outside of a marriage between one man and one woman.”

Jim Campbell, the senior attorney with Alliance Defending Freedom who is representing Hands on Originals in the case, told the Herald-Leader prior to oral arguments that business owners should not be forced to print shirts that express messages that violate their religious beliefs. He further argued that a gay shirtmaker should not be forced to print a shirt expressing opposition to same-sex marriage, and contends that a ruling in favor of his client would “protect speech across the board.”

Alliance Defending Freedom made similar arguments in a case involving a Colorado baker’s refusal to bake a cake for a same-sex couple that was eventually heard and decided by the U.S. Supreme Court. In 2018, the court ruled in favor of the baker, Jack Phillips, finding that that the Colorado Civil Rights Commission may have acted in a prejudicial manner against Phillips when it ruled he violated state civil rights law by refusing to serve the couple. As a result, the Supreme Court reversed the commission’s finding.

But Ray Sexton, the director of the LFUC human rights commission, told the Herald-Leader that the debate over the “messaging” of the shirt obscures the fact that Hands On Originals deliberately discriminated against the Gay and Lesbian Services Organization, now known as the Pride Community Services Organization.

“If this case was truly about the message on the shirt, they would’ve rejected it from the beginning,” Sexton said. “It wasn’t until they found out who the shirt was for that they denied the service.”

He also hopes that the Kentucky Supreme Court will rule on the facts of the case surrounding the business’s refusal, rather than technicalities (such as the fact that a T-shirt with a logo may incidentally bear a message, or relying on the fallacy, embraced by the lower courts, that the word “pride” in reference to one’s identity necessarily implies an endorsement of same-sex marriage or is somehow anti-religious).

“I stand by our investigation and our process, I don’t think there’s a way they can send it back,” Sexton said of the Kentucky Supreme Court justices. “I don’t think they’ll have a choice but to make a decision on the facts of the case.”

John Riley is the local news reporter for Metro Weekly. He can be reached at jriley@metroweekly.com
← Previous Story Gary Ray Bowles, “I-95 Killer” who strangled 6 gay men to death, executed in Florida
Next Story → Minnesota Republican who compared gay people to rapists is running for U.S. Senate