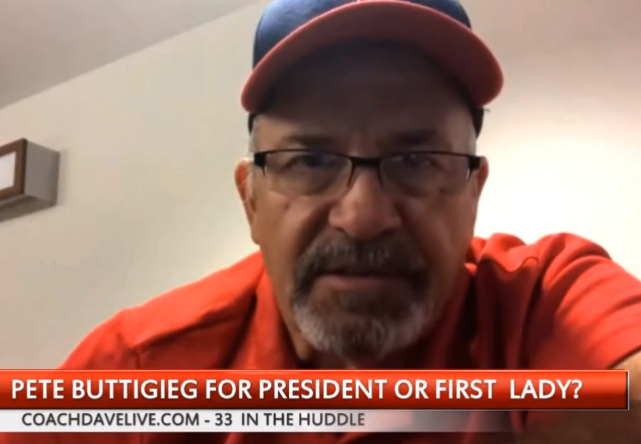 The fundraiser, which attendees said brought together “like-minded people” who care about “Christian values” and “our way of life,” was reportedly a successful evening.

The following morning, however, Daubenmire used his daily “Pass The Salt Live” webcast to launch into a homophobic attack on Buttigieg, according to Right Wing Watch.

“He doesn’t even take the leadership role in his home, because he has a husband [with] he being the wife,” Daubenmire said. “If he is the wife, does that mean that he is the insert-er or the insert-ee? Which role would Mayor Pete play?”

“We live in a society where we are giving serious consideration to a man who performs oral sex on another man,” he continued. “We have to make this stuff unthinkable again. We have to… What he does in his own home is, in fact, his own business until he wants to be president of the United States. When he wants to be president of the United States, I want to do some scrutiny on what type of moral character this guy has. And I’m just telling you this: if this guy’s moral character involves doing what I believe he does have to do in order to have an orgasm, I got a problem with it.”

He added: “We need to make homosexuality unthinkable again. It needs to go back in the closet.”

Prior to his selection as keynote speaker for the Harrison County Republican Party, committee member Chuck Harrah had proclaimed Daubenmire to be a “great man” and “a genuine hero.”

“Dave Daubenmire is a great example of a man on a mission to be the voice for me and millions of others that comprise the silent majority of the United States of America, by using his faith-based ministry to empower his audience,” Harrah told the Herald-Star.

Harrah added that Daubenmire was the right choice to be their guest speaker, because he “epitomizes what is good and decent about this great nation.”

But Daubenmire — who recently obtained VIP tickets to one of Donald Trump’s campaign rallies — is actually “a deeply bigoted, anti-Semitic, anti-choice, anti-LGBTQ, right-wing conspiracy theorist,” according to Right Wing Watch.

His past statements include saying that ugly women become lesbians because men won’t love them, arguing that Oprah Winfrey wanted to run for president in order to enact a white genocide, and that interracial marriage is “spiritual AIDS.”

Not that Harrah or the other members of the Republican Party in Harrison County seemed to care.

“Not only does he talk the talk, but he also walks the walk,” Harrah said of Daubenmire prior to the fundraiser. “He is a great inspiration to myself and many others.”

Unfortunately, Buttigieg is no stranger to homophobic attacks on the campaign trail.

The first viable openly gay candidate for president, Buttigieg was this week referred to as “a queer” by a Republican politician in Tennessee.

County Commissioner Warren Hurst lamented that a gay man is running for president and claimed that white men’s rights are being taken away in an anti-gay rant that was captured on video.