When a bully repeatedly called him "faggot," Jordan Steffy snapped 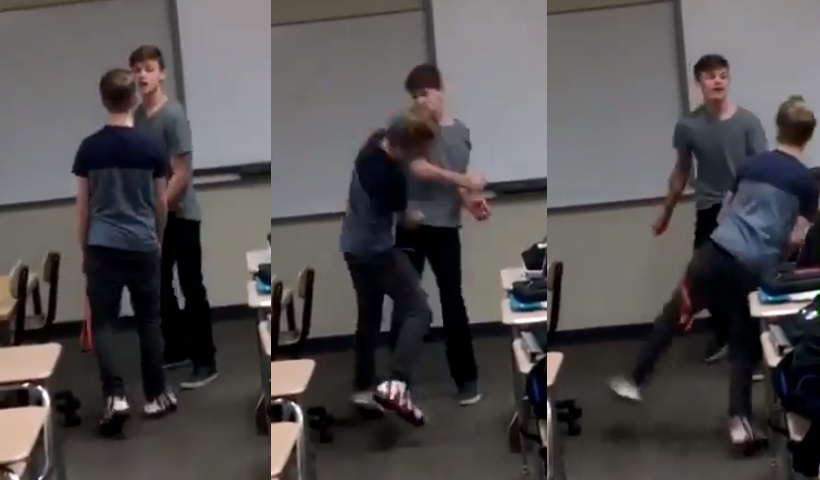 A gay teenager in Indiana has been suspended after fighting back against a homophobic bully.

Speaking to Insider, the junior — who has been bullied regularly since coming out in seventh grade — said he’d finally had enough of being called a “faggot” and snapped.

“He made an anti-gay post with a picture of me on it saying how he hated gays and a bunch of throwing up emojis all over it,” Steffy said. “I walked up to him and said ‘Why did you post this?’ He said ‘It was just a post.'”

Steffy responded that it wasn’t “just a post,” it was “a post about me, saying how you dislike who I am, and I don’t appreciate that.”

In the video, Steffy tells the boy — who is standing very close to him — to “back the fuck up out of my face now, ’cause I’m not playing with you.”

“Why you in my face, faggot?” the boy responds.

Steffy then pushed the boy, saying, “Don’t fucking play with me.”

“Don’t fucking put your hands on me, faggot,” was the response.

Steffy then swings at the boy, knocking him sideways.

“Call me a fag one more fucking time and I’m gonna fucking pop your ass,” Steffy said, and then started repeatedly hitting the boy as classmates watched (and filmed).

This is the fight 😶 pic.twitter.com/DAsehv9I4m

Y’all ever wonder what’s going on at your old high school too? pic.twitter.com/FiCZw8y6ir

Steffy told Insider he “just got sick” of the homophobia.

“It’s crazy the amount of hatred I received just for liking who I like and being me,” he said.

Following the fight, Steffy was sent to the principal, where he was suspended. In a follow-up tweet, he said that his mother “doesn’t agree with how it was handled” and is considering homeschooling him.

Responding to a mother who praised him for his actions, Steffy said that his own mom “told me that she does not condone fighting but this is something she told me it was ok to use to stick up for me and many people who are who they choose to be.”

He also noted that the other boy had been suspended, but not for as long as Steffy.

LGBTQ Twitter has, perhaps unsurprisingly, cheered Steffy on for standing up to a homophobic bully.

“I’m sorry you had to go there, but I love that you stood your ground,” comedian and drag performer Miss Coco Peru tweeted. “Keep being you!”

“Thanks for standing up for yourself and for all of us,” @barrybri tweeted. “I threw a kid against a locker in grade 9 after years of homophobic crap. He never did it again. Sad that it still happens. Stand tall, Jordan. And don’t let them tell you where you can or can’t go to school.”

Others pointed out that an adult can be heard in the background of the video saying, “Jordan, that’s enough.”

Users asked why they failed to intervene earlier, given that Steffy was being called a “faggot” repeatedly prior to hitting the other boy.