The Curious Incident of the Dog in the Night-Time (★★★★☆) pulsates with the vitality of a story being told practically in real-time. It’s a powerful effect of playwright Simon Stephens’ choice to frame his adaptation of the acclaimed 2003 Mark Haddon novel — a coming-of-age narrative seen from the perspective of central character 15-year old Christopher Boone (Harrison Bryan) — as a reenactment of Christopher’s writing relayed by one of the boy’s teachers, Siobhan (Tessa Klein).

Consequently, Christopher, who manages, despite his self-described “behavioral problems,” to be a brilliant mathematician and problem-solver, is active both in shaping and performing his part in the drama that’s reported in the title. From numerous angles, as Christopher attempts to solve a dastardly case of canicide on his normally quiet suburban block, the play puts us inside the teen’s head. And Round House’s striking production, led by Bryan’s vivid turn as Christopher, casts his singular experience in moving, physical terms. The show skillfully evokes the reality of a kid who relates to the world differently, loses his mother, then his sense of security, and, struggling, applies his diligent, compulsive personality towards tracking down the killer of his neighbor’s beloved dog, Wellington.

Departing not far from the expressive method of prior major productions, including the Tony-winning Broadway version, co-directors Ryan Rilette and Jared Mezzocchi visualize Christopher’s tale against a vibrant backdrop of geometric shapes and patterns. Set designer Paige Hathaway has erected a wall of tightly-packed, movable cubes, building blocks of a composite screen that displays projections of Christopher’s alternately lucid or troubled thoughts, theories, and calculations. The kinetic cocktail of Andre Pluess’ sound design, Sherrice Mojgani’s atmospheric lighting, and chalk-drawn projections designed by Mezzocchi serve as a dazzling extension of the storytelling, and of Bryan’s embodiment of the role.

Having also performed the role in a 2017 Pioneer Theatre Company production in Salt Lake City, Bryan, for all intents and purposes, seems to bring only Christopher to the stage. The character is, as he himself would admit, a handful. He reacts violently to being touched, and has a difficult time accepting variations in his routine. But Bryan finds his genial self-awareness, and conveys the junior sleuth’s infectious enthusiasm for getting to the bottom of things. By the same token, he portrays the less appealing aspects of Christopher’s tenacity with an honesty that sells how important it is for Christopher to somehow reconcile himself with his shattered family — grieving dad, Ed (Cody Nickell), and his dearly missed mom, Judy (Tonya Beckman).

Nickell and Beckman, playing a husband and wife operating from opposite sides of life, though sharing the common goal of their son’s wellbeing, balance the light and hurt that both cross the boy’s path. Nickell turns Ed tightly inward, save for the discernible pall of regret that hangs over the man, and the tenacity we might recognize in his son. In her take on mother Judy, Beckman supplies an affinity for sometimes difficult Christopher that answers many of the questions the story raises about what’s happened to Judy before she ever shows up in this dramatization. The performance registers a patient caregiver’s facility at responding to the idiosyncrasies of her incredibly bright son.

Within the story of Christopher’s evolution, Judy evolves too, in a compelling and meaningful fashion, as does the production itself, abetted by an able ensemble of actors — Maboud Ebrahimzadeh, Laura C. Harris, Eric Hissom, Kathryn Tkel, Cody Leroy Wilson, and a wonderful Kimberly Schraf — in multiple featured roles.

Rilette and Mezzocchi, and choreographers Colette Krogol and Matt Reeves, founders of the Orange Grove Dance Company, orchestrate the various encounters and collisions along the remarkable journey with an elegance that belies Christopher’s often gut-wrenching coming-of-age.

It all meshes with the elegant blueprint Stephens’ script provides for the production, capturing both the unsettling mystery at the center of Haddon’s novel and this unforgettable adolescent detective dead-set on solving the case. Like any great investigator, his mind and his methods are his greatest strengths. And in boldly confronting his so-called weaknesses, he teaches as much as he learns.

The Curious Incident of the Dog in the Night-Time 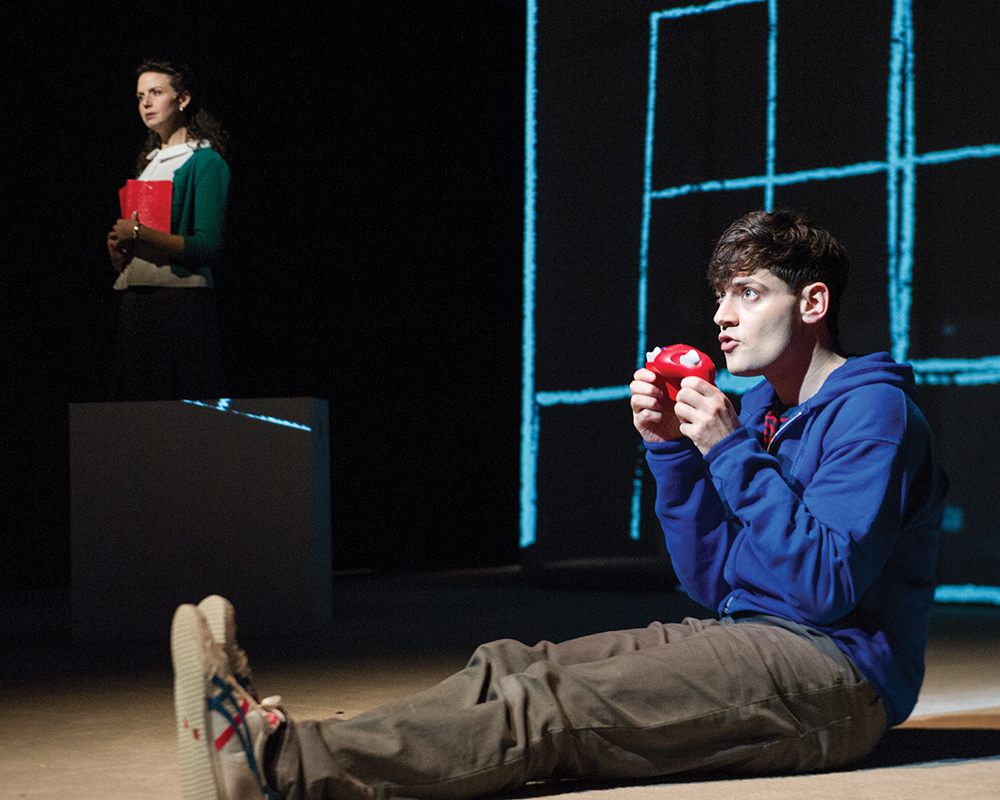 André Hereford covers arts and entertainment for Metro Weekly. He can be reached at ahereford@metroweekly.com. Follow him on Twitter at @here4andre.
← Previous Story Samuel Adams on playing Mozart in ‘Amadeus’
Next Story → Theater Review: “The Woman in Black” at The Shakespeare