Unfortunately, LGBTQ issues go unmentioned save for a fleeting reference from Elizabeth Warren

By John Riley on January 15, 2020 @JohnAndresRiley 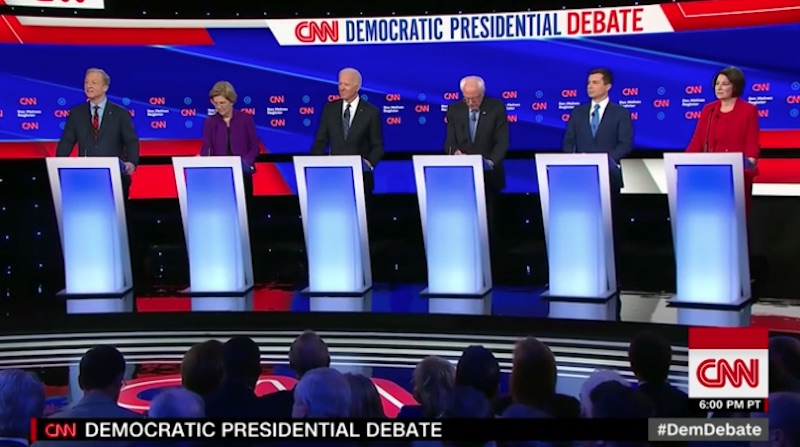 The six Democratic presidential candidates on stage at Drake University in Des Moines, Iowa, last night hit their stride, making a last-minute pitch to voters with three weeks left until the Iowa caucuses while also aiming their attacks squarely at President Donald Trump instead of each other.

Tuesday night’s debate was a much less raucous affair than the one held in December in Los Angeles, Calif., when the candidates released a barrage of attacks on each other in what became known as the “wine cave” debate, leaving a sizable number of voters pessimistic about their chances of unseating the incumbent president.

On the surface, all six candidates appeared got across their individual messages across in a debate that dug deep into policy and provided plenty of contrasts between the candidates’ stances on various issues without seeming nasty and petty.

They also committed no major gaffes that would doom their campaigns or undercut their argument that they’d be best suited to be the country’s next commander-in-chief.

Billionaire businessman Tom Steyer hit his two major themes — the need to end corruption in politics and take drastic steps to combat climate change — while also arguing he is best suited to take on Trump on the one issue that most voters perceive as the president’s strength: the economy.

Sen. Elizabeth Warren (D-Mass.), despite a skirmish with Sen. Bernie Sanders (I-Vt.) over whether he had suggested a woman couldn’t win the presidency — something Sanders claims not to have said — made a closing argument for not only why a woman could win, but why she would be the strongest Democrat to face off against Trump.

It was one of a number of moments throughout the night when Warren gave off an aura of confidence and strength, leading 10 of 11 people on a CNN panel of undecided voters to name her as one of their top two debate winners.

“Look, this question about whether or not a woman can be president has been raised, and it’s time for us to attack it head-on,” Warren said, urging viewers to look at the men on stage.

“Collectively, [the men] have lost 10 elections. The only people on this stage who have won every single election that they’ve been in are the women: [Sen.] Amy [Klobuchar] and me,” she added. “And the only person on this stage who has beaten an incumbent Republican anytime in the past 30 years is me.”

Sanders, for his part, said it was “incomprehensible” that anyone would believe that he does not think a woman could be elected, noting that 2016 Democratic nominee Hillary Rodham Clinton won the popular vote over Donald Trump, even as she lost the Electoral College.

On policy, the Vermont senator was consistent — as he has been in all debates thus far — calling for radical change that would raise worker’s wages, overhaul the nation’s for-profit health care system, tackle climate change, and provide free college while canceling student debt, with the aim of improving the lives of Americans who feel squeezed by depressed wages and rising costs of living.

Joe Biden, despite occasional minor verbal stumbles (the former vice president has worked hard throughout his life to overcome a childhood stutter), delivered a strong closing statement where he called the election a “character check” for the nation and emphasized an importance of a return to decency, mirroring the message with which he launched his campaign.

Sen. Amy Klobuchar (D-Minn.), lagging in a far-off fifth place in many polls, used the debate to try and increase her name ID, casting herself as a pragmatic, moderate option for voters who was not only capable of beating Trump, but delivering on her more modest campaign promises once in office.

Former South Mayor Pete Buttigieg attempted to cast himself as a Washington outsider who would be able to provide the starkest contrast with the president, both on political issues and issues of personal character, as well as his military service and willingness to talk about his faith and how it informs his worldview.

Related: Buttigieg draws fire from other Democrats in PBS debate

The debate marked the last televised appearance for the candidates before the Iowa caucuses on Feb. 3. For Sanders, Warren, and Klobuchar, it may even be the last chance for them to reach crucial voters, as they will be expected to be in Washington, D.C. as the U.S. Senate considers evidence looking into whether to impeach President Trump for abuse of power and obstruction of Congress.

In December, the U.S. House of Representatives voted to impeach Trump over allegations that he withheld military aid to Ukraine in order to force government officials there to launch investigations into the president’s political opponents, specifically Biden, who is considered the frontrunner in the Democratic primary.

Unfortunately for LGBTQ voters, Warren mentioned anti-transgender violence only in passing, as part of a recitation of a number of issues that the candidates did not get the opportunity to weigh in on, despite Tuesday night’s debate being much more policy-heavy than past ones.

Freedom For All Americans CEO and National Campaign Director Kasey Suffredini noted that the moderators failed to address the issue of a lack of federal nondiscrimination protections for LGBTQ people, despite the House-approved Equality Act languishing in the Senate and the Supreme Court poised to issue a decision in the coming months as to whether federal statutes prohibiting sex-based discrimination apply to LGBTQ people.

“With a looming Supreme Court decision that could decide whether employers have a right to discriminate against LGBTQ people and fire them simply for being who they are, ALL candidates — regardless of party — must proactively champion the need for nondiscrimination protections,” Suffredini said in a statement. “Nearly 70 percent of Americans agree: every LGBTQ American deserves the chance to work hard, support their family, and live safely with dignity and respect. Nondiscrimination should be front and center at these debates, and we urge debate moderators and candidates to do better.”