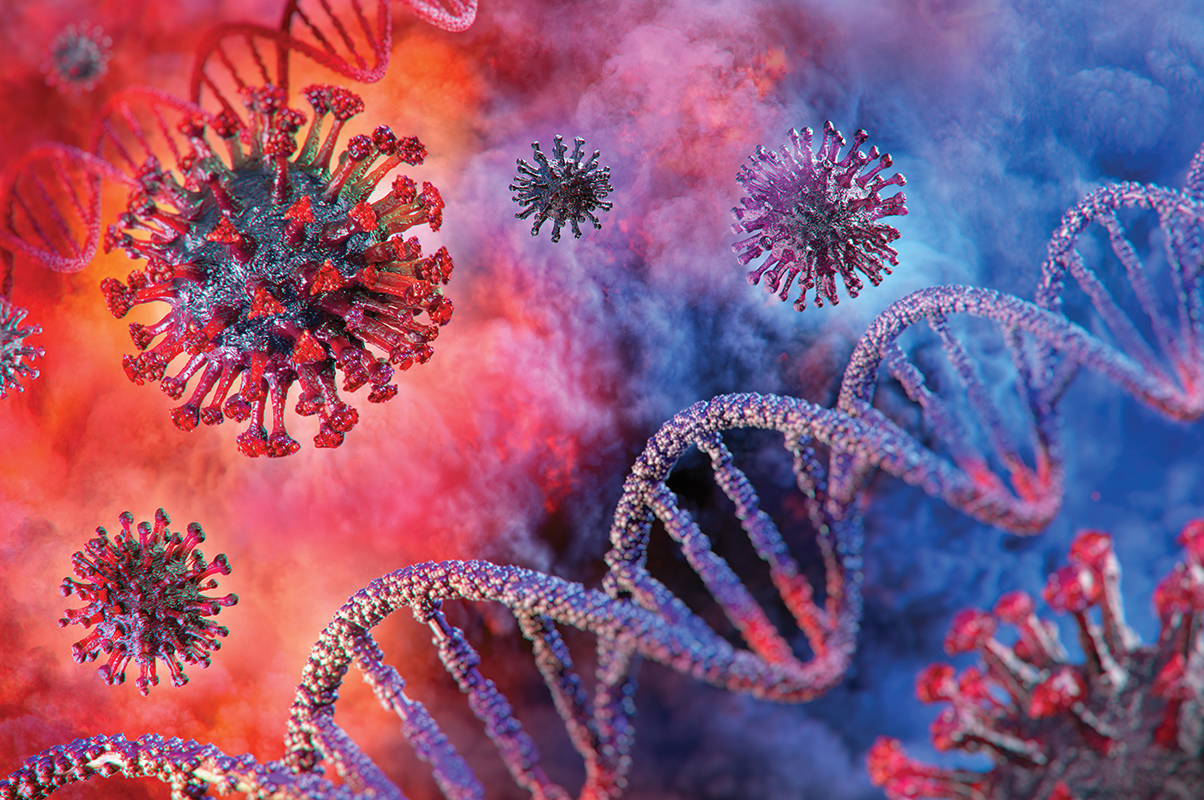 Confirmed cases of coronavirus worldwide are proliferating faster than any one organization can accurately track the spread of the disease. Prior to publication, the World Health Organization’s global tally of confirmed COVID-19 cases rose to more than 190,000, while the total reported by HealthMap — which includes Oxford and Harvard Medical School among its contributing sources — has jumped to more than 200,000 cases. According to the WHO, two months ago there were 282 confirmed cases in four countries.

The rapid spread of the disease, and ensuing fatalities, fear, shutdowns, and economic slowdown, have left folks reeling. And alongside the uncertainty, real and existential, that’s blanketed bustling cities like D.C., scientists like Dr. Thomas J. Hope are racing to grasp what makes the virus tick with enough certainty to be able to contain it. A pioneer in HIV research, Hope runs a lab in the Department of Cell and Developmental Biology and Obstetrics and Gynecology in the Feinberg School of Medicine at Northwestern University. He also happens to have been one of the U.S. co-organizers of an emerging infectious disease meeting in Bangkok the third week in February, where, as Hope told Metro Weekly, the coronavirus identified as 2019-nCoV was a major topic of discussion.

“This meeting kind of related [to] where it all started to blow up,” he says. “It was really fascinating to follow it since then.” Busily monitoring COVID-19, Hope has been able to apply his expertise related to studying the first hours of how viral infection is established. “I think the key is, this virus can be exposed in the environment and survive,” Hope explains. “HIV instantly would kind of dry out. Once HIV dries out, it’s dead. I think that once COVID and other respiratory viruses dry out, they’re actually in a more stable form. That’s why they travel around the world. They sort of follow a less humid environment, which is advantageous for them.”

Concerns about the virus had somewhat of a chilling effect on Hope’s February emerging viruses meeting. “A bunch of people canceled that trip to Bangkok, but a lot of people said they would wait and see,” he says. “I can tell you that it was very humid and hot there, and not an advantageous environment for the virus to transmit. At least, that’s my interpretation of it.”

Indeed, although the rate of infections is tipping upward in Thailand, the nation’s total number of cases — a reported 212, as of March 17 — still ranks well below the tens of thousands in China, Italy, and Iran. Nearby Cambodia has logged remarkably even fewer cases, but, as science journalist Andreas von Bubnoff reports from Phnom Penh, the disruption of everyday life familiar to people around the world has quickly swung into place there, too.

“Nobody took this seriously. Nobody expected it to be so easily transmitted. All of a sudden you don’t think the virus is anywhere, and it’s everywhere. This week we get to see what everywhere means in the U.S., and it’s going to be scary.” –Dr. Thomas J. Hope

“So what’s happening here is that it’s a little bit bizarre,” says von Bubnoff, who has years of experience covering viruses and vaccines. “And I thought it wasn’t going to happen here that things were closing down. But now things are closing down.” Based in Kleve, Germany, where he’s also a professor of International Science Communications at Rhine-Waal University, von Bubnoff is visiting Cambodia, which announced on March 14 a ban on tourists from Italy, Spain, France, the United States, and Germany. Attempting to depart on Monday, March 16, he found his flight to Germany bumped to Thursday, and all he could do was wait.

“I reported for Nature on the 1918 flu virus ten years ago. I reported on how horrible it was. It killed I think 50 million people, and it always sounded so far away. And then all these things came up like SARS and MERS, and Ebola and all this, eventually, it stopped. But this one… I don’t know. It’s so strange to wake up at night, and I’m usually a news junkie anyway, but now I really wake up at night and it’s 4 a.m. and I can’t sleep anymore. That’s completely fucking insane.”

While many fortunate residents hunker down with supplies and streaming options here in D.C., from the other side of the world, von Bubnoff says that, “In several places where I was entering, they measured my temperature, and sometimes they will also at a club spray your hands. They won’t ask you, they would just do it, they will just start spraying your hands. And then you see people walking around in my apartment building spraying the entire hallway with some kind of disinfectant.

“The other thing is that obviously the hotels, hotel reservations are going to fall off a cliff starting 30 days from now when all these foreigners are not going to be allowed to — I mean, basically, people who are here already can stay, but the rest have to stay out, all those foreigners from those five countries at least can’t enter anymore. Hotels are starting to tell people that they might have to lay off.”

Even though visitors like von Bubnoff are being allowed to stay in Cambodia for now, “People are trying to get the hell out of here. But that’s only been in development in the last 24 hours and it’s really like everything’s changing so quickly.”

Awaiting von Bubnoff’s safe return to Germany are his wife, and a home country that is also freezing up quickly to curtail the spread.

“We have no choice — we have to isolate ourselves. The world is just saying sit down and watch the TV and stay in your house. Think about some of our ancestors and the sacrifices they made for us. Our sacrifice is to binge-watch Netflix.” –Dr. Thomas J. Hope

“Before I left, it was completely normal, and now one of the German states closed all of their airports,” he says. “So if you wanted to go there, then you’re screwed. And I think even I underestimated the seriousness of the uncertainty of the situation. Maybe in part because I’ve just never lived through anything like this before. I don’t know what it is, it’s just so unprecedented.”

Dr. Hope invokes a similar view of staying humble in the fight to maintain public health.

“I think that we — the world — has completely lost our proper respect for pathogens, which is part of the basis of this whole anti-vaxxer movement and things. It’s like, ‘I don’t have to worry about that, that’s not a problem.’ So this, I think, reminds everybody about this being a problem, and reminds everybody how things can spread fast.

“Nobody took this seriously, and nobody expected it to come to them. Because nobody expected it to be so easily transmitted, and mostly be either asymptomatic or hardly symptomatic, and that’s like the perfect combination for trouble. It’s like the un-perfect combination, because if you spread easily, and people don’t know you’re infected, then it gets passed up and causes big trouble in certain populations. That’s about as dangerous as it gets. Because all of a sudden you don’t think the virus is anywhere, and it’s everywhere. This week we get to see what everywhere means in the U.S., and it’s going to be scary.

“The problem is that we don’t have the tests yet, but they’re coming,” Hope insists. “So it’s easy to make a choice when there are no choices. And we have no choice — we have to isolate ourselves and social distance, or whatever you want to call it. And the world is just saying sit down and watch the TV and stay in your house. Think about some of our ancestors and the sacrifices they made for us. Our sacrifice is to binge-watch Netflix. Right? But we need to do that for about a week, and then I think there’s going to be tests all over the place, and then we’ve got to test people and figure out where the virus is, and maybe we come out of this okay.”

André Hereford covers arts and entertainment for Metro Weekly. He can be reached at ahereford@metroweekly.com. Follow him on Twitter at @here4andre.
← Previous Story Religious conservatives are blaming gay people for coronavirus
Next Story → Here are the Prides that are cancelled or postponed