Evangelical leader Franklin Graham is claiming he’s being unfairly harassed because of his religious beliefs as he defends a decision to require medical workers at an overflow hospital for COVID-19 patients, which is run by his organization Samaritan’s Purse, to sign a “statement of faith” expressing anti-LGBTQ views.

Graham and Samaritan’s Purse have previously said, separately, that they will not turn away any patient, regardless of sexual orientation or gender identity, who seeks treatment at the emergency field hospital.

However, a gay activist posing as a doctor volunteering his services was turned away after he revealed his sexual orientation — even though he said he’d still be willing to work with Samaritan’s Purse, so long as he did not have to agree to sign the statement of faith, and even though there is a shortage of health care workers to treat COVID-19 patients in hospitals across the nation.

In an interview with the Charlotte Observer, Graham defended requiring doctors and nurses at the field hospital to abide by the organization’s values by signing the statement of faith, even though the hospital is technically an extension of Mount Sinai Hospital, which has an LGBTQ-inclusive nondiscrimination policy.

“All of our doctors and nurses and staff, [they’re] Christians,” he said. “We believe it’s very important that — as we serve people and help people — we do it in Jesus’ name.”

Graham defended his opposition to same-sex marriage by saying: “We have a long list of things we want people to understand and agree with before we take them to work with us.”

He then implied that LGBTQ people and those who support same-sex marriage are in the same undesirable category of worker as drunks and drug users.

On Tuesday, Graham — who has never turned down an opportunity to cast the Christian majority in the United States as an oppressed minority — took to Facebook to lament that some New Yorkers were critical of Samaritan’s Purse and the beliefs contained in the statement of faith.

He accused those critics of “harassing” both him and the organization, and alleged that groups or political leaders seeking information on the field hospital’s policies were simply diverting attention and resources that would be better spent responding to the COVID-19 pandemic.

“We have watched daily press briefings by Governor Cuomo and others pleading for help and on April 1, in partnership with Mount Sinai Health System and in response to urgent calls for hospital beds, medical equipment and staff, Samaritan’s Purse erected a 14-tent, 68-bed emergency field hospital in Central Park, staffed by a team of more than 70 doctors, nurses and other medical personnel and relief specialists. This respiratory care unit, which includes 10 ICU beds equipped with ventilators has admitted 119 patients during our first two weeks of operation,” Graham wrote.

“While so many have expressed their appreciation and support, sadly some New York officials and a special interest group have expressed concerns or outright opposition to the presence of Samaritan’s Purse and our field hospital in Central Park.”

The Reclaim Pride Coalition has also alleged that Graham is using the visibility from the partnership with Mount Sinai to proselytize and raise money to enrich himself and his organization.

“These groups share a common objection to the Statement of Faith which Samaritan’s Purse requires its employees to sign and generally asks its volunteers to support,” Graham said in his Facebook post. “While our Scriptural belief in marriage between a man and a woman seems particularly offensive to representatives of these three groups, we don’t believe this is the time or place to wage this debate. … It seems tone-deaf to be attacking our religious conviction about marriage at the very moment thousands of New Yorkers are fighting for their lives and dozens of Samaritan’s Purse workers are placing their lives at risk to provide critical medical care.

“In a country that cherishes freedom of speech and religion we don’t object to opposition or criticism of our beliefs as a Christian organization. What we do object to is being harassed into diverting precious resources of time and energy and personnel away from serving COVID-19 patients in New York City in order to respond to demands for documents and other information from eight Democratic members of Congress, the Human Rights Commission and the Reclaim Pride Coalition — all while the death toll in New York continues to climb,” Graham added.

“If any of these groups had funded and erected their own emergency field hospitals to serve COVID-19 patients in Central Park, we would join what we believe would be most New Yorkers — and Americans — in applauding and praying for them, not harassing them.”

According to the New York Times, the field hospital had treated 130 patients as of Tuesday, with five patients ultimately succumbing to the illness.

Rep. Jerrold Nadler (D-N.Y.), one of the members called out by Graham for sending a letter seeking answers as to whether Samaritan’s Purse might be engaging in discrimination, responded to Graham’s claims of harassment, tweeting: “Holding a group with a proven track record of discrimination accountable is not harassment, it’s ensuring that New Yorkers feel safe seeking medical care. I am encouraged to see that Samaritan’s Purse has agreed to follow anti-discrimination policies.”

Holding a group with a proven track record of discrimination accountable is not harassment, it's ensuring that New Yorkers feel safe seeking medical care.

I am encouraged to see that Samaritan's Purse has agreed to follow anti-discrimination policies.https://t.co/lNbiDNbl9z

Graham later appeared on FOX News’ The Ingraham Angle to defend the decision requiring workers at the field hospital to sign the statement of faith.

“I’m not homophobic, and I’m certainly not going around bashing people because they may be homosexual,” Graham told host Laura Ingraham, as reported by Media Matters. “I believe in that God loves all of us. He created us all, but we also are sinners, and our sins separate us from God. And I want people to know how they can have a relationship with God, and that’s through faith in his son Jesus Christ. So, I don’t bash homosexuals. I want homosexuals to know the truth, that God does love them.”

Graham has previously said he loves homosexuals “enough to care to warn them that if they want to continue living like this, it’s the flames of hell for you.”

Natalie James, an organizer with the Reclaim Pride Coalition, said Graham’s comments are only “the most recent in a long trend of transphobic, homophobic and otherwise bigoted” comments he’s made in recent years.

“It’s a doubling-down of the discrimination that we believe his organization has shown in turning away people from volunteering at the hospital extension here in New York, because they would not subscribe to their statement of faith, which is transphobic and homophobic,” James said. 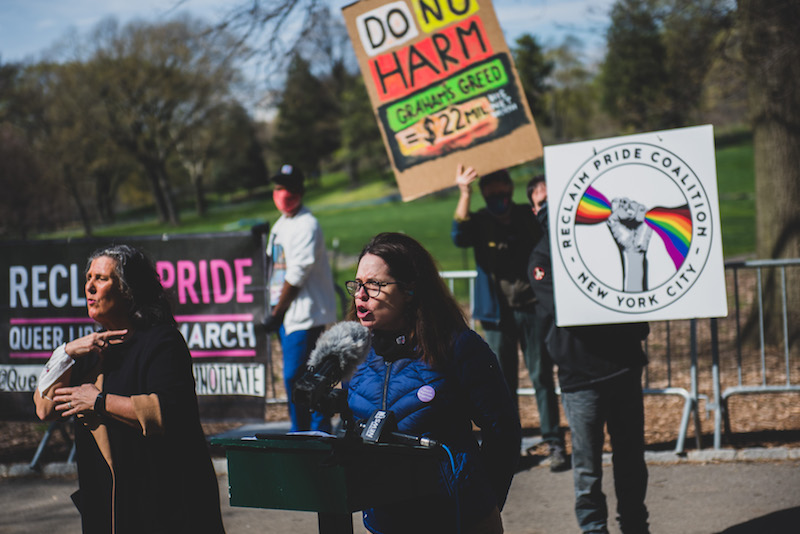 “Health care should not come at the expense of human rights,” James added. “We made a very simple demand of Samaritan’s Purse, to drop their homophobic and transphobic requirement that all volunteers subscribe to their statement of faith.

“In regards to his statement [alleging persecution], I think it also fits into Franklin Graham as a skilled political operative,” James told Metro Weekly. “Franklin Graham and his organizations’ first priority has historically been to act as a religious organization first, and as an aid organization second. What they’re doing here in New York, is primarily for the purpose of proselytizing and fundraising first, and medical provision second.”

James noted that Graham has been touting the Samaritan’s Purse field hospital on his website, with photos of tents emblazoned with his organization’s logo, along with a message asking for donations.

“Central Park is an iconic location, and it’s an ideal opportunity for fundraising,” she said. “It’s my understanding that Samaritan’s Purse has an annual revenue of around $500 million per year, the bulk of which are from donations, and this is the perfect forum for that.”

James said that the Reclaim Pride Coalition recently held a press conference and demonstration calling out Samaritan’s Purse for its policy, but activists have also called for New York state and city officials, and Mount Sinai Hospital, to be held accountable for allowing Graham to run the field hospital, potentially in violation of state and local civil rights laws. 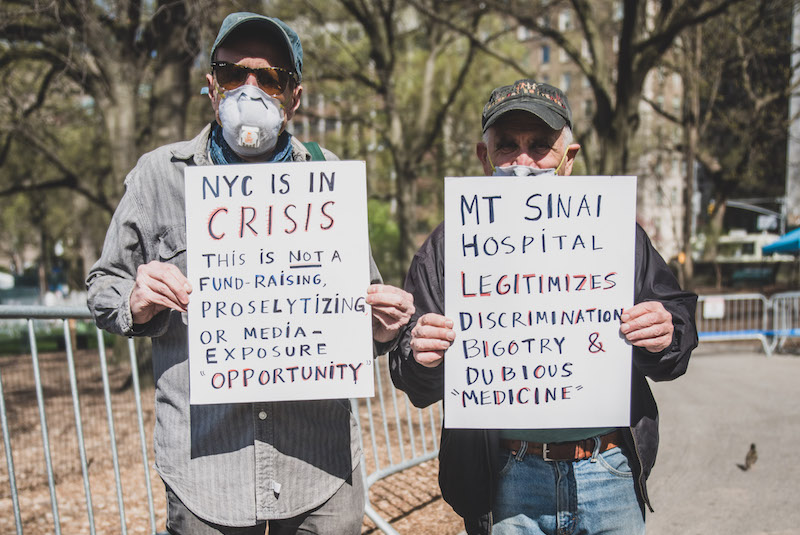 “This is a matter of 68 beds. While we certainly appreciate that patients are being treated and hopefully recovering, we have raised the question of why this particular group. There are plenty of other groups that do not espouse transphobia and other bigotry that could have placed those beds there.”

The coalition is demanding that Gov. Andrew Cuomo (D), Mayor Bill de Blasio (D), and Mount Sinai Hospital publish plans to monitor Samaritan’s Purse to ensure that the organization isn’t breaking nondiscrimination laws and is providing competent medical care to those treated at the field hospital. It has also demanded that both Cuomo and de Blasio publicize whether Samaritan’s Purse has been receiving public money, and to name the specific people who approved the organization’s request to take charge of the Central Park field hospital.

“We want people to call out the government for their actions. Even though neither [Cuomo nor de Blasio] have an impending election, they still want to avoid negative press,” James said. “So we are asking that people put the pressure on the government by tweeting out the hashtag #HealthNotHate at Mayor de Blasio, Governor Cuomo, and Mount Sinai leadership, including Dr. David Reich. I think we can put enough pressure on them to get the answers we want and to make a difference.”

Editor’s note: This story was updated to include comment from the Reclaim Pride Coalition.

John Riley is the local news reporter for Metro Weekly. He can be reached at jriley@metroweekly.com
← Previous Story Baltimore community holds virtual vigil for murdered trans woman
Next Story → ‘Catholics for Trump’ touts an anti-LGBTQ political agenda. That’s not what most Catholics believe.