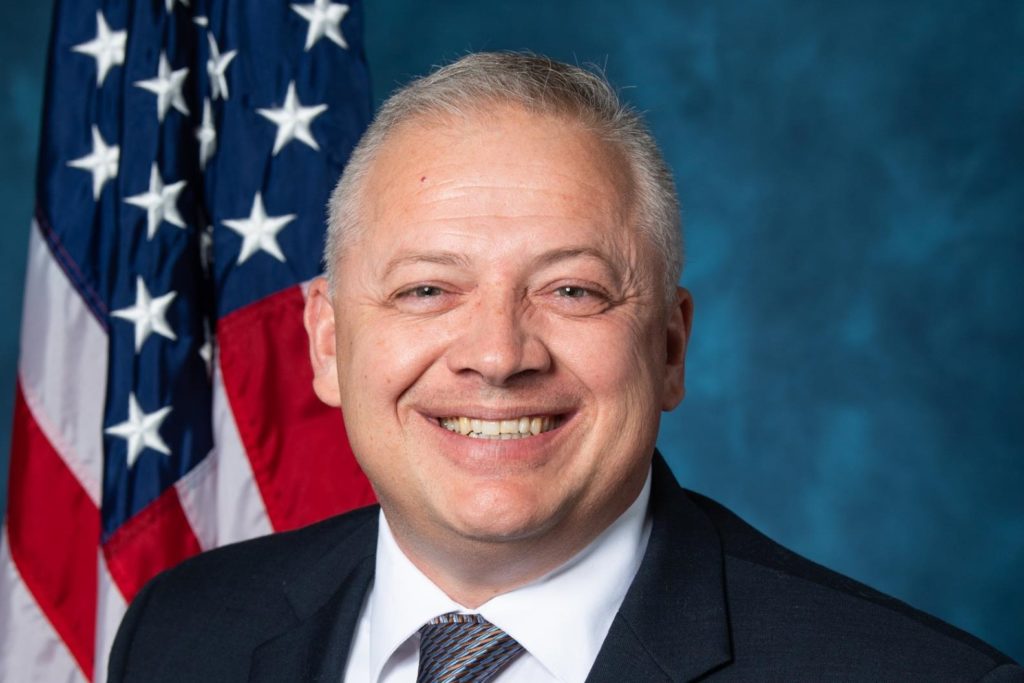 On Saturday, freshman U.S. Rep. Denver Riggleman (R-Va.) was defeated in his bid for re-election, losing the Republican nomination for Virginia’s 5th Congressional District to a self-described “biblical conservative,” largely due to the fact that Riggleman officiated the same-sex wedding of two gay campaign volunteers last year.

Riggleman, a libertarian-leaning conservative, defended his decision to officiate the July 2019 wedding of Alex Pisciarino and Anthony “Rek” LeCounte, saying that the Republican Party is supposed to value individual liberty and freedom.

Following the wedding, one of the local GOP county committees attempted to censure Riggleman for his actions, pointing to the party’s official platform opposing same-sex marriage and declaring one-man, one-woman marriages to be “the foundation for a free society.” After the censure motion failed, the members unanimously passed a motion of “no confidence” in him.

Soon after, Riggleman found himself facing a primary challenge from Bob Good, a former athletic department official at Liberty University who describes himself as a “biblical conservative and constitutional conservative.”

Good told Charlottesville Tomorrow in an interview last month that he initially supported Riggleman, but objected to his support for same-sex marriage, exceptions for rape and incest when it comes to banning abortion, and support for marijuana decriminalization.

But while Riggleman’s libertarian-leaning views likely would have had more traction among rank-and-file Republicans, the 5th District Republican Committee threw a wrench in the congressman’s re-election plans after it decided to hold a convention, which limits the number of eligible voters, to decide the party’s nominee ahead of November’s general election.

Riggleman was endorsed by Trump and by Liberty University President Jerry Falwell, Jr. But neither of those endorsements were ultimately enough to overcome Good’s appeal to convention-goers, who are historically comprised of voters who are the most conservative and most fervent in their beliefs.

Due to the ongoing COVID-19 pandemic, the Virginia 5th District Republican Committee decided to hold a “drive-through” convention where up to 3,500 registered delegates could cast votes at Tree of Life Ministries in Lynchburg, Va. In total, 2,537 delegates ended up voting in the all-day convention, with Good earning 58% of the vote to Riggleman’s 42%.

While the convention ended at 7 p.m. Saturday, the vote tally was not announced until after 1 a.m. Sunday, with Riggleman raising concerns that at least two dozen non-registered delegates had cast ballots in Campbell County, where Good resides and has a base of support, according to Politico’s Ally Mutnick.

Still no results from the nominating convention, which ended at 7 p.m.

Riggleman, who was more skeptical of holding a convention to begin with, claimed that a small group of party insiders were trying to oust him, and alleged that there were several voting irregularities.

“Voting irregularities and ballot stuffing has been reported in multiple counties in the #VA05. Voter fraud has been a hallmark of this nomination process and I will not stand for it,” Riggleman tweeted. “@VA_GOP needs to reevaluate their priorities. We are evaluating all our options at this time.”

Voting irregularities and ballot stuffing has been reported in multiple counties in the #VA05. Voter fraud has been a hallmark of this nomination process and I will not stand for it. @VA_GOP needs to reevaluate their priorities. We are evaluating all our options at this time.

At his victory party on Sunday morning, Good dismissed Riggleman’s complaints as “what losers say,” and pledged to fight for “the true conservative principles that we presented for this campaign” and the “Judeo-Christian principles upon which our nation was founded.”

Some of Good’s supporters have claimed that the primary was not about same-sex marriage, but Good’s call for an “America First” immigration policy that would radically reform how citizenship is granted, the asylum process, and which immigrants will be admitted into the nation.

Others — particularly in the southern part of the gerrymandered, sprawling district, near Danville and Lynchburg — argued that the election was a reflection of regional divides where people in the southern part of the district were not receiving as much consideration as voters in the northern half of the district, which span from Charlottesville to the outer exurbs of Washington, D.C.

Democrats are elated at the prospect of Good’s win, as they believe he has limited appeal compared to the man he’s succeeding. In 2018, Riggleman won the district by about nine points, and Democrats believe that, even if they can’t win the district, they can force Republicans to spend money to defend what should be a safe Republican seat. Currently, four Democrats are vying for their party’s nomination, which will be decided in a primary on June 23.

Grant Fox, the communications director of the Democratic Party of Virginia, called Good a weak candidate, even for a Republican district, and characterized his “far-right views” as “way out of step with the majority of Americans.” He also noted that FEC reports show that Good has only $34,000 on hand, while several of the potential Democratic challengers have more than triple that amount.

“Virginia Republicans have completely lost touch with reality,” Fox said in a statement. “Every year they nominate unpopular candidates with extreme positions, and every year they lose more and more races. They’re a party defined by incompetence and bigotry, and Bob Good has plenty of both.”

Editor’s note: This story was updated to include comment from the Democratic Party of Virginia.