Harvey Guillen gets his own game with Guillermo’s Stakeout 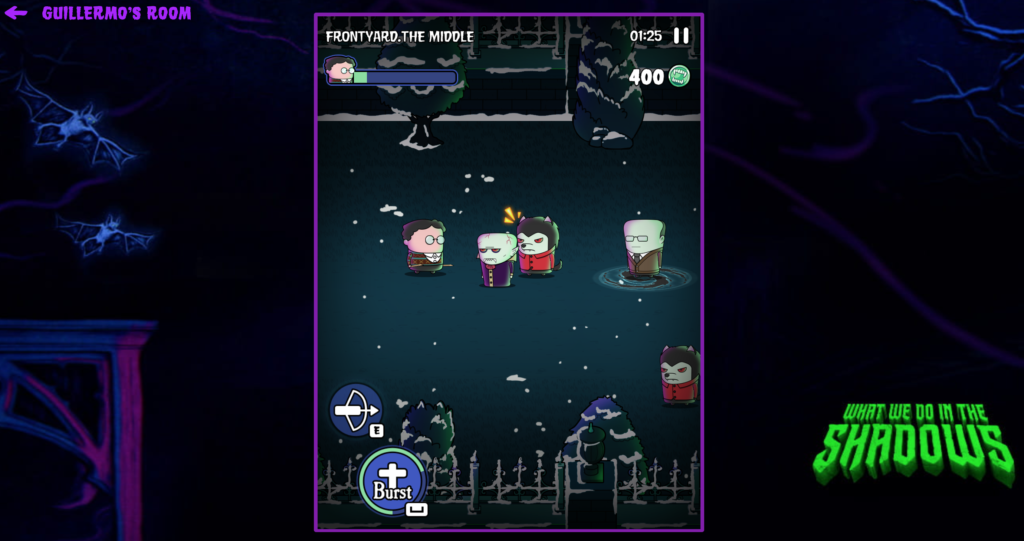 “I have made it to the last round,” admits Harvey Guillén of the adorably vicious online game Guillermo’s Stakeout, “and then I die. It can be kind of difficult, I have to say.”

The free online-only game, released earlier this week as part of the What We Do in the Shadows section of FX’s celebration of the free Comic-Con@Home virtual convention, is centered on Guillermo (Guillén), a vampire’s familiar with innate undead hunting skills. As Guillermo progresses, he ferociously makes his way through an onslaught of vampires and werewolves, all the while dodging cursed hats and the life-sapping monologues of energy vampire Colin Robinson. (Full disclosure: this writer has barely made it past the first Collin Robinson.)

“I did my voice recording for it not long ago,” says Guillén by phone from his home in California, where he is currently sheltering. The actor was thrilled to have input into the game’s design and at one point was able to convince the creators to change Guillermo’s glasses to round, so they better matched the spectacles the character wears on the series.

The LGBTQ actor and advocate is even more thrilled to be part of his second Comic-Con, even though this year’s event is virtual due to the COVID-19 pandemic. He’ll be part of Saturday’s Shadows panel, featuring Matt Berry, Natasia Demetriou, Kayvan Novak, Mark Proksch, and hosted by Haley Joel Osment, on Saturday, July 25, at 5 p.m. PDT (8 p.m. EST), streaming for free. Last year, however, was another story — Guillén sat on his first-ever live panel for Shadows, a show on which the GLAAD Media Award-winning has watched his star skyrocket. 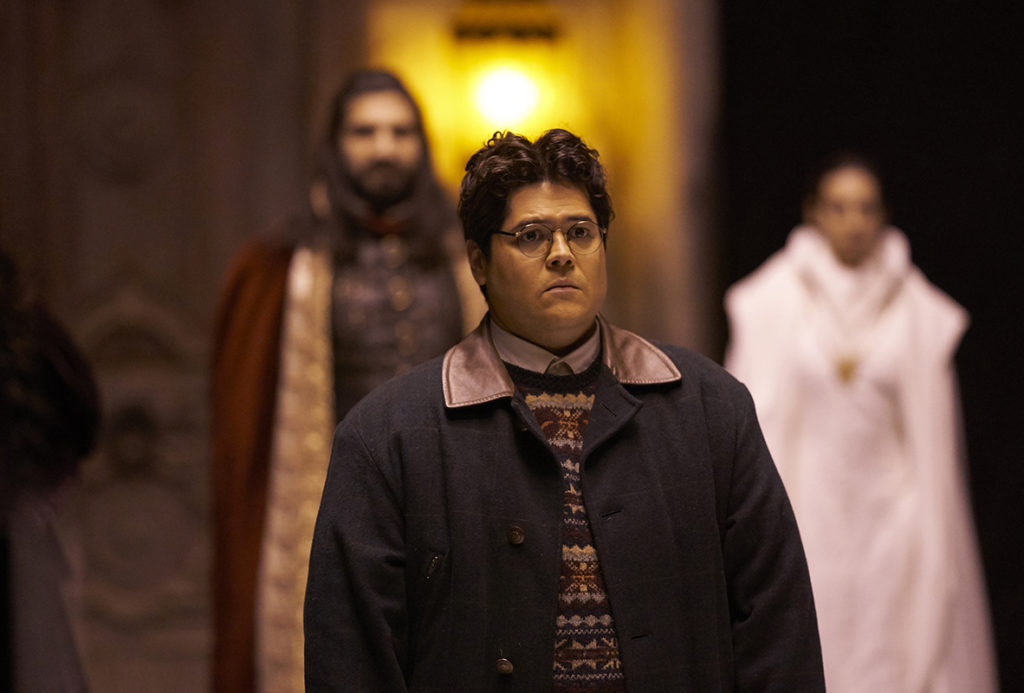 Guillén in What We Do in the Shadows — Photo: Russ Martin/FX

“I’d never been to Comic-Con when I was in school,” he says. “I couldn’t afford it. So last year was my first time and it was a huge deal. I had no idea how big it was.” He’s eternally grateful for the adoration of the fans. “They want to meet us,” he says. “And I want to give them back as much as I can.”

One way he is currently giving back is through his Instagram account. Each Friday, Guillén curates some of the best  Shadows fan-created art he can unearth, and highlights it in his story.

“I call it ‘Fan Art Friday,’” he says. “I know that, as an artist, sometimes you can create something for yourself and no one sees it. It doesn’t get exposure. My motto is that artists should support artists. And so whenever I see art in any form, I want to show it and support it.”

Along those notes, Guillén is teaming with artist Topher Adam (who creates some truly fantastical, stylized pieces based on Disney’s Haunted Mansion), and is launching an official fan club merchandise page. A portion of every sale from a special, Guillermo T-shirt and sweatshirt will go to CHIRLA, an organization that helps immigrant families in need of financial assistance.

Guillén can’t spill any beans about the planned third season of Shadows, but based on the season two cliffhanger, expect some major hierarchal changes at the Staten Island vampire manor.

“At the end of the day, it’s a human living with vampires,” says Guillén, reflecting on why his character has gained such traction with fans. “Vampires are immortal. They can live forever — unless they’re killed with a stake. But their timeframe is different from a mortal’s — our time on earth is short and we have to make the best of it. For them, there’s no urgency in day-to-day life.

“So for Guillermo, the clock is ticking. He’s wasted a decade of his life being a familiar to someone who [doesn’t appreciate him]. Everyone’s been in his position, whether we work for a boss that overlooked us for a promotion or we’re in love with someone from afar. People can just relate to his journey.”

The panel for What We Do in the Shadows streams at 8 p.m. EST/5 p.m. PDT). Click here to set a reminder to watch when it goes live.