By John Riley on September 3, 2020 @JohnAndresRiley

Richard Grenell, the former Trump appointee who became the first LGBTQ cabinet-level official when he was appointed Acting Director of National Intelligence, has joined a conservative organization founded by televangelist Pat Robertson that has a history of advocating against homosexuality.

According to a news release from the American Center for Law and Justice, Grenell, the former U.S. Ambassador to Germany and a U.S. State Department spokesperson to the United Nations during the George W. Bush administration, has joined the organization as a “special advisor for national security and foreign policy.”

In a statement, ACLJ Executive Director Jordan Sekulow said Grenell “brings his broad foreign policy, national security, intelligence and political experience to this new role and we are honored to have him on the team.”

“I’m excited to be joining the ACLJ,” Grenell said in a statement. “I have admired their work for years. This group has been instrumental in defending religious freedom here and around the world, and upholding the Constitution. Two issues that I also consider of utmost importance, especially as faith and liberty continually fall under attack. I look forward to being a part of their incredible organization.”

But the Human Rights Campaign, the country’s largest LGBTQ rights organization, was quick to criticize Grenell, who recently said that U.S. President Donald Trump was “the strongest ally that gay Americans have ever had in the White House.”

“‘Gaslight Grenell’ strikes again,” HRC president Alphonso David said. “From ridiculously and errantly calling Trump the ‘most pro-gay president in history’ to now joining the anti-LGBTQ American Center for Law and Justice, it’s clear ‘Gaslight Grenell’ has absolutely no backbone and no regard for the rights of LGBTQ people.”

HRC noted that, besides being founded by Robertson, an anti-LGBTQ televangelist, the ACLJ has a history of perpetuating anti-LGBTQ narratives and even opposing the decriminalization of homosexuality abroad.

Given Grenell’s role as head of a Trump administration initiative designed to push for decriminalization in more than 70 countries worldwide, many feel the ACLJ’s mission undermines that work.

The ACLJ, and Robertson, have previously been criticized for rhetoric that some LGBTQ people see as disparaging, including suggesting that the COVID-19 pandemic could be a punishment for marriage equality because people have “broken the covenant that God made with mankind.” Robertson has also claimed that allowing out LGBTQ scouts into the Boy Scouts of America would expose scouts to “predators” and “pedophiles.”

Meanwhile, the ACLJ filed an amicus brief to the U.S. Supreme Court in 2000, in which they argued against allowing openly gay adult leaders in the Boy Scouts, claiming that “men who by word or deed condone homosexuality cannot, therefore, be good role models.”

ACLJ has condemned judges who ruled to overturn bans on same-sex marriage, with its former head, Jay Sekulow, now a lawyer for President Trump, claiming that those judges were “flouting the laws of our country, and condescending to every major religious tradition in the world.”

The ACLJ has also been credited as one of the chief organizations encouraging African countries to adopt or retain laws that criminalize homosexuality. It was involved in a 2001 lawsuit seeking to overturn an LGBTQ-inclusive nondiscrimination ordinance in Louisville, which has more recently been challenged by a photographer seeking a religious exemption to protect her from being forced to shoot same-sex weddings. ACLJ has also called the celebration of Harvey Milk Day a form of “indoctrination” seeking to target children by convincing them to embrace the LGBTQ lifestyle.

“‘Gaslight Grenell’ is now propping up an organization infamous for working in Africa to criminalize homosexuality and put LGBTQ people in prison for being who they are,” HRC’s David continued. “He is working for an organization founded by a man that said allowing people like Grenell to join the Boy Scouts would be letting in ‘predators’ and ‘pedophiles’ who could not be ‘good role models.’ ‘Gaslight Grenell’ has no basis in reality to claim himself a ‘spokesperson’ for any segment of our community. Voters will not be fooled by his role as a Trump messenger. ‘Gaslight Grenell,’ like Trump, is divorced from reality.  It’s no wonder they seem to get along so well.”

One recipient hopes to work in the foreign policy sector, while the other is focused on ensuring educational equity. 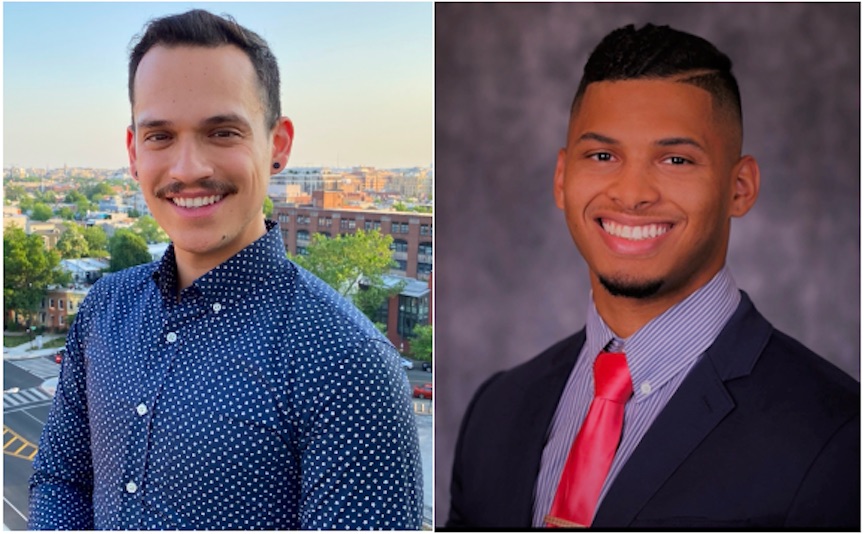 Two LGBTQ Latino professionals who one day wish to work at the highest levels of the federal government have been selected by the local Latinx LGBTQ organization LULAC Lambda to receive scholarships that will help them pursue advanced degrees.

For the fourth year in a row, LULAC Lambda, one of 1,000 chapters across the United States affiliated with the League of United Latin American Citizens, is providing scholarships to highly-qualified LGBTQ Latinx students seeking to further their education. The scholarships are intended to help deserving scholars achieve their pursue bachelor's, Master's, or doctorate without taking on a substantial debt burden.