DC Theater Review: ‘Hi, Are You Single?’ at Woolly Mammoth

The droll "Hi, Are You Single?" drives home the point that people with disabilities need nooky too

As he does on his dating profile, Haddad leads with the fact that he has cerebral palsy, entering with his walker to the tune of the pop anthem “Bang Bang.” Recounting his coming-of-age and coming out, he offers tongue-in-cheek tips for how to parade around a gay bar, or finding the perfect perch so that every guy has to pass close enough for him to ask his go-to line: “Hi, are you single?” Haddad’s vivid stories, accompanied by Colin K. Bills’ energetic lighting and the thump of a club beat, capture the spice of single life, while also delineating the drawbacks of dating with a disability.

It comes as painful little surprise to learn that Haddad rarely had experienced discrimination to his face like what he encountered upon diving into the gay bar and dating scene. It’s a cruel world, full of rejection, and some queer folks can be mean or thoughtless, especially when hiding behind online dating profiles. However, that isn’t the moral here. Haddad doesn’t ask for sympathy, but instead earns respect for his wit and strength, and his willingness to examine himself as closely as he does the singles scene at large.

Eventually, the performance, confidently shaped by directors Laura Savia and Jess McLeod, circles around to Haddad confronting his own biases in those encounters when he was the one who meted out rejection. He doesn’t offer excuses nor easy answers, just an implicit invitation to consider how you might approach being, or dating, a person with a physical disability. The performer’s own admitted mobility issues don’t prevent him from commanding the stage, or breezing across it in a brief, sweet dance with a volunteer from the audience. 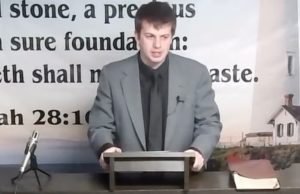 The digital presentation, filmed by Lookout Production Company on Woolly Mammoth’s stage, is a great-looking hybrid of video and live theater. And the small but enthusiastic audience, composed of Woolly staff and members of the show’s creative team, fill out that shared space where imagination meets smart storytelling, understated design, and an inspired performance.

Haddad also acknowledges work that’s inspired him, name-checking the Netflix comedy series Special, created by and starring Ryan O’Connell, who also has cerebral palsy. It’s a classy (and savvy) move that both evokes community and pays homage to artists like O’Connell and Haddad who bare their lives so that we all might see ourselves and our fellow humans more clearly.

Review: Signature’s sublime ‘Simply Sondheim’ is as impactful as it is enjoyable

3 Valentine’s Gift Ideas for the Foodie in Your Life