A proposed bill in Tennessee, which has already earned condemnation from some state business leaders, would allow cisgender students to sue school districts if they’re not given a “reasonable accommodation” after balking at sharing restrooms, locker rooms, or other facilities with their transgender peers.

Under the bill, a cisgender student who provides a written request to administrators expressing their discomfort at sharing spaces with transgender individuals must be accommodated.

A person who is denied access to such a facility can sue a school district, as can a person who provides written notice asking for an accommodation but “later encounters a person of the opposite sex in a multi-occupancy restroom or changing facility designated for the person’s sex and located in a public school building” or “is required by the public school to share sleeping quarters with the opposite sex, unless the persons are members of the same family.”

For legal purposes, “sex” is defined as “a person’s immutable biological sex as determined by anatomy and genetics existing at the time of birth.”

The law would also allow cisgender students or their families to pursue civil lawsuits and seek monetary damages for “psychological, emotional, and physical harm suffered,” as well as payment of attorney’s fees.

Zachary’s bill has been approved by a House subcommittee dealing with K-12 education, and has been placed on the calendar for consideration by the full House Education Administration Committee. The Senate version of the bill, introduced by Sen. Mike Bell (R-Riceville), has not yet received a vote in the Senate Education Committee.

Zachary told The Tennessean that he introduced the bill to provide a clear, one-size-fits-all solution to different districts’ struggles to accommodate transgender students while balancing the privacy interests of cisgender students or those who have religious objections to homosexuality and transgenderism.

“There is a high school that has reached out to me, they are having to [deal with] a problem with boys using the girls’ restroom,” he said. “And they feel like they are handcuffed, and there’s not much they can do about it. This bill takes care of that. It stops all that and just provides absolute clarity.” 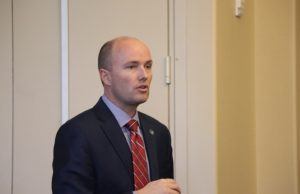 Under Zachary’s bill, transgender children would be required to use facilities matching their assigned sex at birth, but could request a single-occupancy accommodation, just like their cisgender peers.

Some critics note that many schools don’t have single-occupancy restrooms or changing facilities, or might not have enough to accommodate students — or those that do exist might be located in difficult-to-reach areas, particularly on larger or more sprawling campuses. Others say restricting transgender students’ ability to access to restrooms based on their assigned sex at birth will simply lead to more federal lawsuits challenging such laws as unconstitutional.

A similar fate befell Gavin Grimm, a transgender boy at the center of an ongoing legal fight in Virginia, who was forced to use a single-stall restroom constructed out of a broom closet — in an inconvenient location — after parents complained about his use of the boys’ restroom. He later sued the school, since receiving favorable rulings from both a federal court and a federal appeals court.

Chris Sanders, the executive director of the Tennessee Equality Project, said the bill would send a detrimental message to the state’s transgender community, particularly children.

“Trans students are at school to learn. And just like everybody else who has to go to the bathroom, that’s what they are going in there for. They are not going in there to bother anyone,” he told The Tennessean.

“Now, the Legislature comes along and says, ‘Hey everybody, there’s this category of people that we will protect you from if you want to be protected from.’ … This bill reduces trans students to someone that the state is giving you the right to avoid. …That’s why it’s stigmatizing.”