Law of the Land

Saying ”no one in America should ever be afraid to walk down the street holding the hands of the person they love,” President Obama on Wednesday announced his signing of the long-sought federal hate crimes prevention law. 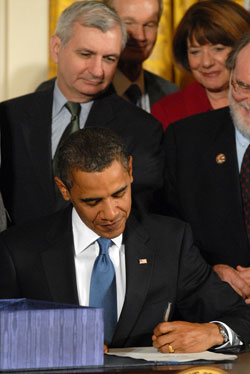 The legislation, formally known as the Matthew Shepard and James Byrd Jr. Hate Crimes Prevention Act, was included as an amendment within the National Defense Authorization Act. President Obama signed the defense-spending bill Wednesday afternoon, with defense department officials and members of Congress in attendance. He then hosted a reception at the White House to draw special attention to the hate crimes measure. Both events took place in the East Room of the White House.

During the signing ceremony, President Obama mentioned the inclusion of the hate crimes legislation within the funding bill.

”After more than a decade of opposition and delay,” said Obama at the 2:30 ceremony, ”we’ve passed inclusive hate crimes legislation to help protect our citizens from violence based on what they look like, who they love, how they pray, or who they are.” He also singled out the parents of Matthew Shepard, a gay Wyoming student killed in a brutal hate crime in 1998.

”I promised Judy Shepard, when she saw me in the Oval Office, that this day would come, and I’m glad that she and her husband Dennis could join us for this event,” said Obama. ”I’m also honored to have the family of the late Senator Ted Kennedy, who fought so hard for this legislation.”

In addition to the Shepard family, openly gay Rep. Tammy Baldwin (R-Wisc.) was a guest at the 2:30 signing ceremony.

During the reception that began at 6 p.m., President Obama also recognized family members of James Byrd, an African-

American man who was killed in a horrific hate crime in 1998 in Texas.

A first and a follow-up

Joe Solmonese, president of the Human Rights Campaign, also praised the measure, saying it ”marks the first time that we as a nation have explicitly protected the LGBT community in the law.” 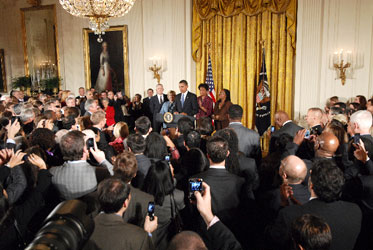 ”And this law,” he said, ”sends a loud message that perpetrators of hate violence against anyone will be brought to justice.”

But the Hate Crimes Prevention Act signed today follows by 19 years the Hate Crimes Statistics Act signed in 1990. That law, which was a landmark achievement at the time, required the U.S. Justice Department to count crimes based on ”race, religion, sexual orientation, or ethnicity” and to publish those statistics annually. The National Gay and Lesbian Task Force played a pivotal role in securing passage of that bill, which was signed into law by President George H.W. Bush. It was also heavily involved in passage of the prevention law.

Both the Human Rights Campaign and the National Gay and Lesbian Task Force were among 29 gay advocacy groups that signed onto a statement for release following the signing. The statement said President Obama’s signing of the legislation ”fulfilled a campaign promise.”

”Our deepest hope and strong belief is that this new law will save lives,” said the statement.

The statement noted that more than 1,200 hate crimes target victims because of their sexual orientation or gender identity every year.

”As a results of this legislation, if local jurisdictions are unable or unwilling to investigate or prosecute hate crimes based on sexual orientation or gender identity, the Justice Department can now step in,” said the groups. ”And that’s why the LGBT community never stopped working for this historic day.”

The White House did not immediately release a list of guests attending the reception, other than members of Congress and the two families. But President Obama thanked openly gay philanthropist David Bohnett and his partner Tom Gregory for ”helping host” the reception. White House LGBT press spokesperson Shin Inouye said the reception was held ”in partnership” with the Bohnett Foundation and that the Foundation ”paid the costs of the reception.”