''Much Ado'' is the Bard for a modern audience done right – ridiculously fun, yet completely about the language and wit

Wince you might at the idea of Much Ado About Nothing rendered as a 1930s screwball comedy set in Cuba, but save the potential wrinkles. The concept — and more importantly, the Shakespeare Theatre Company’s execution of it — ”hath indeed better bettered expectation.” This is the Bard for a modern audience done right. It’s ridiculously fun and yet utterly and completely about the language and the wit.

And once you get the idea, it’s inspired. Surely the scripters of those bantering, flirting, push-me-pull-me comedies were well familiar with the scathing repartee of Benedick and Beatrice in Much Ado? So why not the whimsy of flipping it back to them? As for Cuba, well, it’s anyone’s guess as to why, but it’s certainly as exotic as Shakespeare’s original setting of the Sicilian city of Messina and, with its suggestion of Latin beats and steamy nights, it speaks to the passion and innuendo of the play. 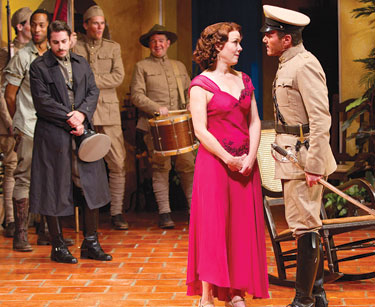 Meisle and Smith in ”Much Ado About Nothing”

Delivered in a late-’30s Technicolor palette, Lee Savage’s set excites the eye with its contrasts of earthy oranges and purple-vivid skies (even if some aspects, particularly the potted plants, suggest in just the tiniest way, the sets of another cultural gem of the ’30s, The Three Stooges).

Carrying the production with a stunning combination of pizzazz, comic timing and command of Shakespeare, is a breathtaking Derek Smith as Benedick. An antidote to all that has reduced comedy to the terms and timing of the sitcom, Smith adamantly keeps his comic expression and wit-delivery in a place of intelligence and sophistication, even when a bit of slapstick is called for. It’s like hearing an orchestra after an organ-grinder with a monkey. And whether wielding his wit or in somber mood, Smith never allows his Benedick to become too much larger than life. There is an entire man evoked here, someone we imagine a life for: a past, a present and, despite his cynicism, a host of future dreams.

Bursting with the kind of take-no-prisoners charisma that would credibly stir a Benedick, Kathryn Meisle is a joyfully recalcitrant Beatrice. Refusing to default to the usual portrayal of the “strong” woman as alternately scornful and coy, Meisle is a breath of fresh air. She shows us a woman who may realize she wants to be loved, but will never trap a man for it; especially by looking vacuously available in between the barbs. A rarity. Except, of course, in the movies of the 1930s, when it was about having the wit to challenge and attract a man. Of course, it was about sex then too — and having the right shape under the glamorous clothes — but still a far cry from the porn-informed image of “attractiveness” currently saturating our screens.

Like Smith, Meisle is another master of the Bard’s language and her beautifully paced exchanges with Benedick make you want to cheer as much as laugh. Interestingly, Benedick and Beatrice are written to suggest they are older than the other would-be lovers, and Smith and Meisle make a convincing pair; mature enough to know what they’re bantering about (despite Beatrice’s claim to be a “maid”) and fit and energetic enough to look well capable of it.

Of course, Much Ado runs two romantic storylines, with the will-they-won’t-they of Benedick and Beatrice balanced against the sincere, and nearly tragic, fast-tracked wooing and engagement of Claudio and Hero. As the earnest, if easily derailed Claudio, Ryan Garbayo is, despite a good facility with the language, a tad slow coming into focus, though he eventually delivers a man who is believably passionate in his outrage and later remorse. As Hero, Kate Hurster emerges in the second act with some believable emotion and facility. Contrasting nicely with the younger actors, Adrian Sparks as Leonato and Bev Appleton as Antonio bring gravitas and thoughtful characterization to their roles as the elders charged with seeing Hero and Beatrice into suitable marriages.

As Don John, illegitimate brother to Don Pedro and schemer, Matthew Saldivar aims for a 21st century edginess that doesn’t quite gel with the spirit of the enterprise, though he is an interesting presence. As Borachio, the man enlisted by Don John to suggest that Hero is unfaithful, Mark Hairston delivers his Shakespeare with much flow and expression. In the role of Don Pedro, David Emerson Toney, at times louder than he is clear, superbly avoids the card-board cut-out version of this character, giving him far more nuance than usual.

Finally, injecting the second act with a powerful dose of beautifully crafted silliness, Ted van Griethuysen as Dogberry, the eccentric local law enforcement, and Floyd King as Verges, his hanger-on, do their part to thwart the dastardly plot against Hero with much flair.

MUCH ADO ABOUT NOTHING

Everyone here, from lead to ensemble, play their parts like the workings of a well-made watch. Keeping the pace intact and, thankfully, allowing Derek Smith to work his magic, director Ethan McSweeny is himself a master of timing, both comic and dramatic.

Bottom line: If you don’t get to this Much Ado, you should be, in the words of Benedick, hung in a bottle like a cat and shot at.

← Previous Story Breaking Out
Next Story → Fiddling with History