Dueling protagonists nearly cancel each other out in Woolly's latest production 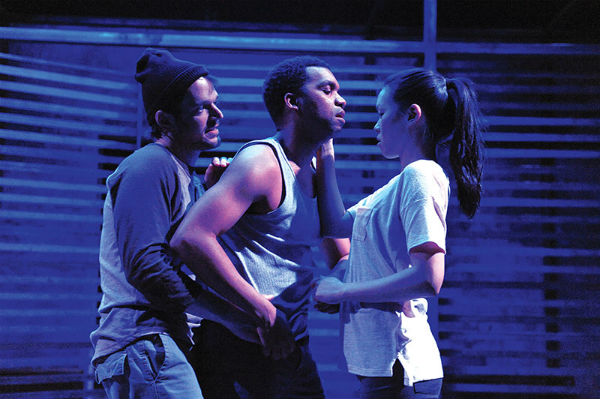 If a play is like a baby –- an organic being incubated (written/workshopped) as it grows and only birthed (staged) when it is capable and ready to breathe on its own –- then Lights Rise on Grace is a play born just a bit too soon. Its heart may beat with ideas rich with intelligence and insight, but it would be a far stronger entity had it been given further time for growth and development.

Case in point are playwright Chad Beckim’s dueling protagonists, each so central they almost cancel the other out. There is the titular Grace, the young, urban Chinese-American who leaves her oppressive family for love only to find herself in the grim existence of the terminally underpaid singleton. And then there is Large, the young, African-American man from the projects whose broken family life leaves him prey to violence –- his own and others –- and a need for love that he is incapable of accepting or sustaining.

Both are compellingly drawn, offering provocative and engaging issues, and each is entangled with the other, but despite the tribute paid to Grace’s final epiphany, neither character surfaces convincingly as a true protagonist. Without this choice, there is a weakness in the play’s overall impact. The stories of Grace and Large feel separate but equal and one’s engagement is similarly divided. Granted, to emphasize one of the stories would have forced Beckim to take a single perspective — and clearly he is loyal to both characters — but choosing one perspective would have given the audience far more to grasp.

Thus, although the progress of Grace and Large through their turbulent lives is fascinating and the subject matter rich and original, the piece ultimately plays out more in vignettes than in an arc leading to significant catharsis.

The piece is crafted in an interestingly reductive, essential style in which the characters move between self-narration and enactment. It is a simplicity that necessitates emotional honesty and Beckim delivers much, even if one wishes he would allow his characters, especially Large, to tell us even more of his inner life. There are some choices regarding what to simulate and what to show that beg a few questions. But although such styles and methods always risk the toe-curling pitfalls of experimental theater (as have been sent up in such gems as the League of Gentlemen’s Legz Akimbo theater troupe), here, thanks to the tight rein of director Michael John Garces, they dance effectively and powerfully on the right side of the line.

Rolling with the systemic challenges, the ensemble is a well-cast and cohesive trio -= the third character being the somewhat enigmatic Riece, whom Large meets in prison. As Grace, Jeena Yi offers an expressive, memorable woman with a convincing inner strength, even if her younger, shyer incarnation is a tad over-played. An intriguingly evoked character, she leaves you wanting to know far more of her inner life in order to make sense of her reactions to her situation. One example of this is her choice to enter a period of promiscuity which seems too much a cliché without knowing more. Another, more pointed example, are the words with which she opens the play: “He broke me.” Surely we should learn why she says this and yet as the play unfolds, no true meaning is made of this statement. It is left a rather flagrant attention-grabber and little more.

As the lost soul Large, Delance Minefee is an extraordinary presence, suggesting a vulnerability that hangs on him like a ghost. Though director Garces allows him to over-egg the batter at times, scaled back, this is a powerful, honest expressiveness. What works less well is Large’s transformation into his later hard-man persona. Again, it is a question for the playwright. What gets him there? He is cloaking himself, but in whom? His father? His brother? There is much focus on what imposes on Large from the outside, and his reactions. There are fewer moments in which we see the world from within his perspective. His is a painful, complex story that cries out for far more than can be given in a spotlight shared with Grace.

Serving as the game-changer in Large’s life is Riece, played with subtlety and understatement by Ryan Barry. Though it was difficult to understand the rather obtuse progression in the prison bonding between Large and Riece, with its vacillation between the near-existential and the almost comically graphic (among other things, do inmates really stand that close to each other for a chat?), Minefee and Barry prevail with a powerful and convincing chemistry.

All three players clearly and convincingly show the progression of emotion and connectedness between and among these characters –- it’s a commitment to the vision that is strong enough to overcome two brief but obtrusive interludes that might otherwise have caused a collective eye-roll or guffaw.

It’s also an integrity that makes this piece far larger than its less-developed parts. We may not know all that much about the inner workings of Grace and Large by the end, but at the very least, they have shared an interesting and relevant story.