Though chock full of great ideas, Zombie: The American needed to be a lot edgier and wittier

Credit where it is due, Woolly Mammoth Theatre Company refuses to be tamed. What issues from its wild and provocative ranks may not always work, but the DC theater scene is always better for it.

This is very much the case with Zombie: The American (

), Robert O’Hara’s joyfully deranged satire on the state of the nation in 2060. It may be chock full of great ideas, funny concepts and healthy provocations, but although a knife is very much in evidence (literally and otherwise), it is never quite twisted enough. 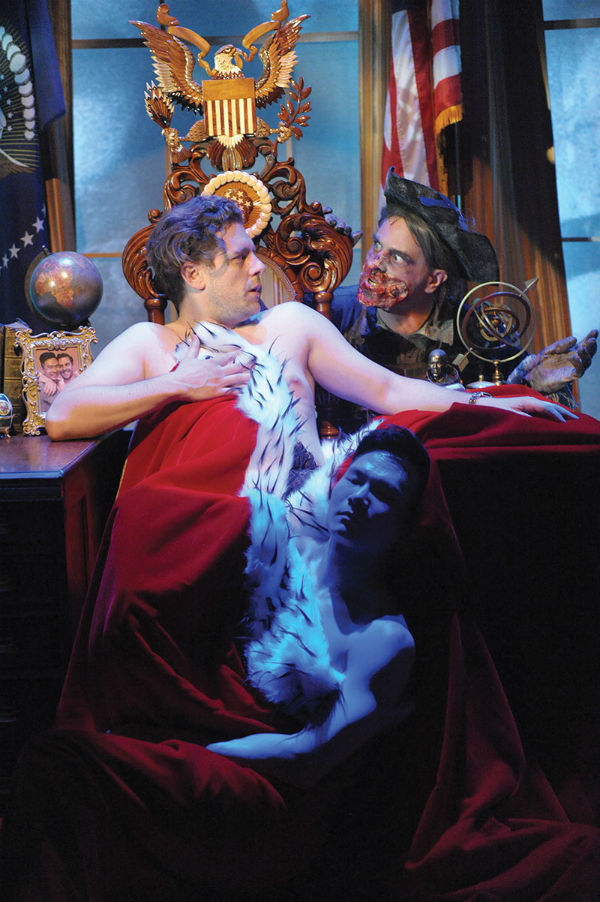 O’Hara starts his whirlwind ride with a presidency in crisis. The United States, a shadow of its former self, is beholden to Great Britain for bail-outs and dependent on the now-powerful United African Nations for peacekeeping duties as America verges on civil war. After a series of incidents and with a coming election, the president is growing desperate. When his secretary of state pressures him to unleash, not a nuclear arsenal, but another secret weapon that has been residing within the nation all along, he discovers a whole new meaning to “We, the People.”

It’s a fun premise and O’Hara delivers it with a reasonable dose of the manipulation, deceit and maneuvering with which we are all very familiar. But although O’Hara can be funny — situationally and with one-liners — this needed to be a lot edgier and a lot wittier to move the needle. Without a more daringly subversive layer, the piece too often feels like very good-humored and energetic messaging on the evils of U.S. politics and spin. And perhaps Director Howard Shalwitz gets this, as he goes some way to filling some of the missing pizazz with a hugely talented cast and a fast and furious production.

As the Lord President Thom Valentine, Sean Meehan offers an interestingly rumpled angst, although O’Hara does not reconcile his bewildered state with a typical politician’s savvy. Though not fatal, Meehan’s Thom also has no real chemistry with husband Chase, a character written without nuance but given a strong, if not overly comical, presence by James Seol. Still, both hold the eye and the imagination — as far as it goes.

Other standouts are Sarah Marshall as Lady Secretary of State Jessica Bloom and Dawn Ursula as Secretary General of the United African Nations Abidemi and her sister, Babirye. Marshall, as always, brings an untouchably perfect wryness to her delivery as well as stellar comic timing. Ursula, a stunning presence, gives an ideal in-your-face irony to her powerful women.

Also taking a double role, Tim Getman brings some of the more irreverent humor to his Zombie Speaker of Zombies and Jessica Frances Dukes is engagingly memorable in her roles. The rest of the ensemble serve their purposes, but like their brain-eating brethren; O’Hara really doesn’t give them enough to get their teeth into.