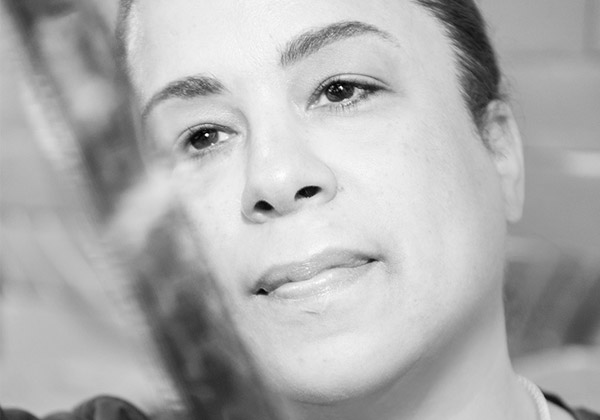 “Reel Affirmations would not exist today if it weren’t for Kimberley,” says David Mariner, executive director of the DC Center. “I’m so amazed at the work that she’s done and her commitment and passion.”

Last decade, Kimberley Bush served as volunteer co-director of Reel Affirmations. Launched in 1991, was touted as the country’s third largest LGBT festival in terms of attendance. But Reel Affirmations started struggling, both financially and in popularity. By 2012, the once mighty 10-day festival had scaled down to run for just four days. By 2013, it was gone.

Last year, the DC Center stepped in and took over Reel Affirmations, with Bush in charge as festival director — now a paid position. Reel Affirmations was too important to too many people to let die, Mariner says, and it also gels with other arts and culture events presented by the Center. “It offers opportunities for us to tell our own stories in our own voices,” says Mariner. “And frankly, opportunities for us to see diverse LGBT lives and diverse LGBT experiences that we wouldn’t see otherwise.”

Few are better qualified to oversee it all than Bush, who also serves as director for the popular (and non-gay specific) DC Shorts Film Festival, running this year from Sept. 10 to 20. But it all started 20 years ago, when Bush started volunteering with Reel Affirmations. “I’ve put on and worn many, many hats with Reel Affirmations,” she laughs, warmly. “Just about all the hats you can wear in regards to the festival.”

METRO WEEKLY: What first drew you to Reel Affirmations?

KIMBERLEY BUSH: I’ve always loved film, but as I was coming out in the early ’90s and trying to find my way in the community, I ran into Reel Affirmations. It was an organization that made a difference in our community visually, as well as bringing the community together. And so in meeting [former festival director] Matthew Cibellis and getting involved, that’s when my love affair and passion began. I realized the important work that we were doing, creating a venue for filmmakers and storytellers to present images of us and ideas and stories to the community. It had a huge affirming impact on our community — especially in the days before Netflix and Logo.

Reel Affirmations was long one of the top film festivals in the country, competing with San Francisco, New York and L.A. It was vital. And I still think we are vital.

MW: You took a break from Reel Affirmations only to return in 2012, by which point the festival had fallen on hard times and had dramatically downsized. What was it like to see it so drastically changed?

BUSH: I did everything I could to keep it alive. Finances were not strong when I came back aboard in 2012, so I had to deal with the limited funds that I had. I couldn’t do the full 10-day festival, so I made it a four-day festival instead.

MW: Now that the DC Center is the festival’s new presenter, why did you keep it to a three-day affair?

BUSH: I thought it best to keep it simple and manageable. In addition to a couple workshops, we have just 12 different screenings. And we will not have any conflicting films screening in different locations. It’s basically one-stop viewing, and you can see every single film you want to see over the three days.

MW: Has the volunteer team also been downsized?

BUSH: I have had anywhere between five and 15 volunteers during the course of the year, offering assistance in certain aspects. But, really, when it comes down to it, the brunt of the work, I’m doing.

MW: And this isn’t even the only thing you do.

BUSH: No, I’ve also recently become the film festival director for DC Shorts. That’s keeping me equally as busy right now because DC Shorts is about two weeks after Reel Affirmations. And I’m a realtor as well, but that’s something I’ve had to put aside because the two film festivals definitely are full time.

MW: Returning to the topic of film, what would you say is your favorite film of all time?

BUSH: That’s crazy! There are so many films out there that I love, both LGBT and not. I really enjoy the Coen brothers’ films, and loved Fargo. I also loved Eve’s Bayou and Beloved.

Among LGBT films, some of my favorites are ones we premiered in D.C. at Reel Affirmations, such as Bill Condon’s Gods and Monsters and Kimberly Pierce’s Boys Don’t Cry. I also loved High Art with Ally Sheedy, The Incredibly True Adventures of Two Girls in Love, and Desert Hearts, back in ’85 — I think that was the first gay film I saw.

MW: What with the advent of Netflix and other streaming services, where LGBT films are widely available, do you still feel there is a need for an LGBT film festival?

BUSH: I really, really do. I get tons of emails every day from filmmakers — even though Reel Affirmations has only really been back for a year or so — asking me, “Please show my film.” For example, I added an extra two hours of programming on Saturday, Aug. 29, so we could show the documentary The Same Difference. Filmmaker Nneka Onuroah specifically sought me out to say, “Hey this film really needs to be seen.” And she was right: It’s a compelling documentary that broadens the definition of what it means to be part of the African-American lesbian community in regards to gender roles and gender representation. Another example, screening Sunday, Aug. 30, is Game Face, a documentary that highlights a transgender athlete, MMA’s Fallon Fox, as well as Terrence Clemens, a gay college basketball player in Oklahoma. Director Michiel Thomas specifically emailed me saying, “You need to show my film.” And we do. We need to be able to see these images and hear these stories, to be able to have hope and to be able to change things in our own life.

“I’ve had plenty of attendees say, ‘This film has changed my life.’ I think that’s the most you can do when you’re on this planet — try and make a positive contribution in just one person’s life.”

MW: I must ask whether you have any ambition of becoming a filmmaker?

BUSH: You know, I think I’m so in awe and enamored with filmmakers — directors, producers, screenwriters, cinematographers — and what they’re able to do. I have thought about going back to school to do film studies, but I think I’m very happy with being on the other side of the lens, and being able to provide a venue to present the finished product.

MW: Do you anticipate Reel Affirmations will ever be a 10-day festival again?

BUSH: The goal is definitely to scale it back up, and hopefully get bigger, better and stronger. I don’t know about 10 days — I just want to grow. But I also want to maintain quality, integrity and strength, so if that means keeping it to a four- or five-day film festival, that’s what we’ll do.

MW: And the RA Xtra monthly screenings will continue?

BUSH: Yes, that’s been a success. Some months I sell out both of the Xtra screenings.

I could be wrong, but I want to say that we’re the only monthly LGBT film series around. I don’t know of any other area that has an LGBT monthly film series, much less one that’s been as successful or as long-running as this has been, which we created years ago as part of One In Ten.

I’m not trying to do a shameless plug, but our September Xtra is a huge event celebrating the 25th anniversary of Paris is Burning, which I also love. We’ll screen the film and have a Q&A and panel discussion with some of the surviving members from the film as well as other community members. We’re also bringing in Dr. Lucas Hilderbrand to do a reading and signing of his 2013 book, Paris Is Burning: A Queer Film Classic. And we’re ending the evening with a catered reception and a “Mini Ball.”

MW: The Smithsonian’s special Pride month screening definitely proved Paris Is Burning is one of those films best appreciated when seen with a crowd.

BUSH: It really is! I look forward to it. I wish I could have had a bigger venue. HRC was kind enough to let me use that space for free. That’s an amazing thing to begin with: to have a board of directors, who didn’t know me from a can of paint, bring me and the film festival on is extraordinary.

MW: You must be proud to see Reel Affirmations flourishing again.

BUSH: I’m very proud to be a director for two pretty major film festivals in the area — as a woman of color in such a white male-dominated industry. I’m proud to be an African-American woman and a lesbian running Reel Affirmations and DC Shorts, and bringing all these amazing film into the city. I’m trying to figure out how to make the hashtag I use often trend, #FilmChangesLives. Because I firmly believe that.

I know it’s made a difference in my life. And I’ve had plenty of attendees at the films that I’ve presented through RA Xtra the last 14 months say, “This film has changed my life.” I think that’s the most you can do when you’re on this planet, is try and make a difference in just one person’s life, try to make a positive contribution.

I think sight is probably the most amazing sense that we have. What you see can dictate how you feel and how you walk through the world. I like to bring the community together to see specific stories of themselves on screen that can be re-affirming and cultivate dialogue and make connections, and see where those connections can take people.

To learn more about the festival or to volunteer, send an email to kimberley@thedccenter.com.

Read all of Metro Weekly reviews of the Reel Affirmations 2015.

Doug Rule covers the arts, theater, music, food, nightlife and culture as contributing editor for Metro Weekly. Follow him on Twitter @ruleonwriting.
← Previous Story Perfectly Composed: Pasek and Paul are the future of the American musical
Next Story → A Complete Guide to the Films in the 2015 Reel Affirmations Film Festival