) checks a lot of boxes but fails to deliver. Put simply, unless you have been living off grid, revelations on sexual identity — unless explored with insight and originality — are just plain boring. Likewise for throwing around the word “pussy” every two seconds and making a meal about looking at one’s own. Though such themes might once have been shocking enough to be an end in themselves for live performance, those days are long gone.

And though Silverman may understand a bit about parody in her caricatures of the sassy, street-wise New Yorker, the poodle-skirted, bespectacled nerd, the “rich white lady,” and the concept of “butch,” once established these women needed to speak. Whether funny, witty or surreal, they needed to emotionally jostle and mingle in ways that actually say something or cause feeling. Unfortunately, Silverman’s women just drag on through a boring premise (putting on a play) that quickly turns into a clichéd, color-by-numbers exercise in opposites-attracting and personal ah-ha moments.

One need only recall last season’s Women Laughing Alone with Salad, Sheila Callaghan’s hilarious comment on the young female zeitgeist, to see what insight really looks like in an edgy vehicle. That said, Natascia Diaz does her best with celebrity wannabe Betty Boop 3, capturing a certain authenticity in her magnetic narcissism, while Dorea Schmidt gives her Betty Boop 2 a skein of pathos. Unfortunately, despite their efforts, this play never makes it outside the box. 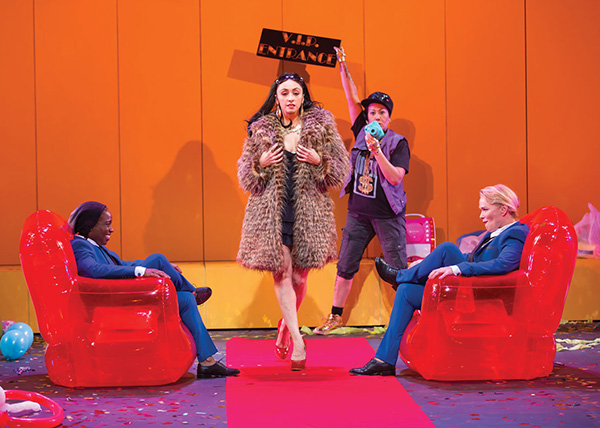