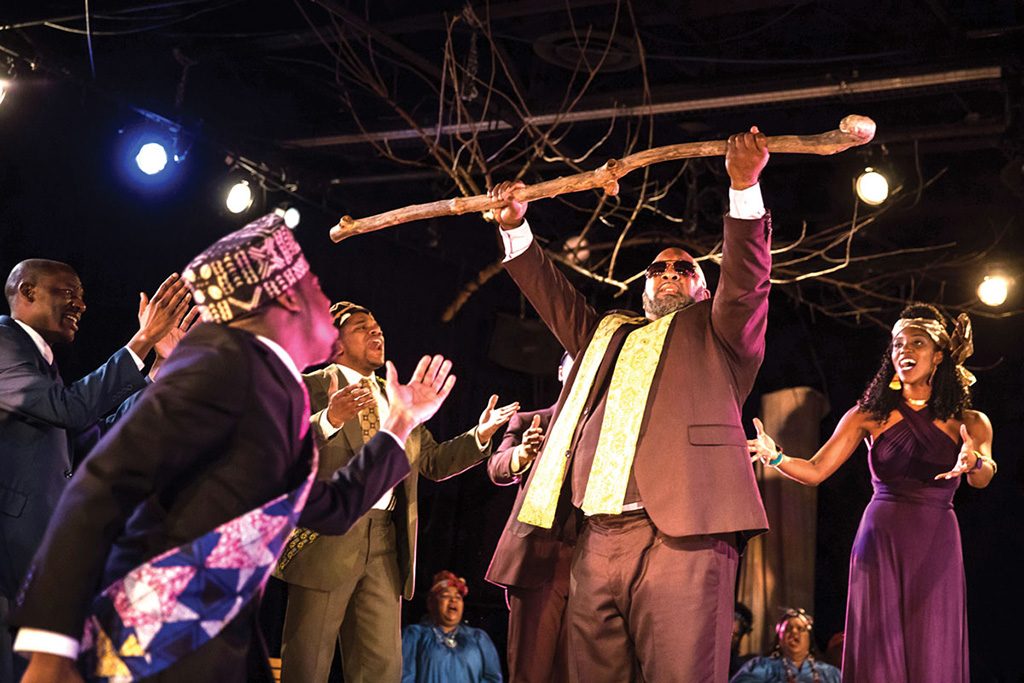 Conceived in the wake of several successful, spiritually-minded Broadway shows — from Godspell to Your Arms Too Short to Box with God — Lee Breuer and Bob Telson’s 1984 Obie Award-winning The Gospel at Colonus adapted the second of Sophocles’ Theban plays into a well-received synthesis of religious parable, Greek tragedy, and African-American gospel revue. In a new production from WSC Avant Bard, Jennifer L. Nelson’s hectic staging of Gospel at Colonus (★★★) offers some soul-stirring singing and sermonizing, but still adds up to much less than the sum of its parts.

The setting inside the intimate Gunston Arts Theatre suggests a temple mount rising over an African garden, complete with a women’s choir and an altar upon which rests the two musicians whose keyboard and djembe supply the sermon’s heartbeat. Here, the audience has been invited to fellowship with Preacher Oedipus (William T. Newman, Jr.) and his flock, as the fired-up minister recounts the tragic exile of Oedipus the King (DeMone) — accursed, blinded, and attended to in his final days by only his daughter, Antigone (Tiffany Byrd), who pleads her father’s case for sanctuary in the city of Colonus.

The very idea of depicting the Oedipus myth as a quasi-biblical tale of a ruined man seeking mercy in the face of his looming mortality is inspired. Breuer and Telson’s artful intent in employing hymns and proselytizing as a theatrical device registers soundly, due in great part to their wonderful, enduring songs. The immediacy and emotion conveyed by gospel music, which can be as searing as it can be uplifting, enriches this redemptive story of a man “piteously ensnared in the net of his own destiny.”

Avant Bard’s production, however, is not well-served by set design, staging and choreography that too often obscures and obstructs the action. Director Nelson and choreographer Sandra Holloway move the energetic cast around the slightly raised stage in formations that evoke a Greek chorus or worshipers in an ancient temple, but the actors often appear more like pillars around a proscenium, concealing from view too much of the ritual the crowd has come to witness. Were the Gunston a true, bowl-shaped amphitheater, the audience could better immerse themselves with the actors situated around the action. But some in the audience, seated two steps below a ring of chorus members, have a view mostly of backs and shoulder blades. The prevailing effect, as the formations shift, circle, and parade about, is more like pageantry than powerful storytelling, marked by a sense of something lacking that the hit-or-miss dramatic performances of an uneven cast do not redress. 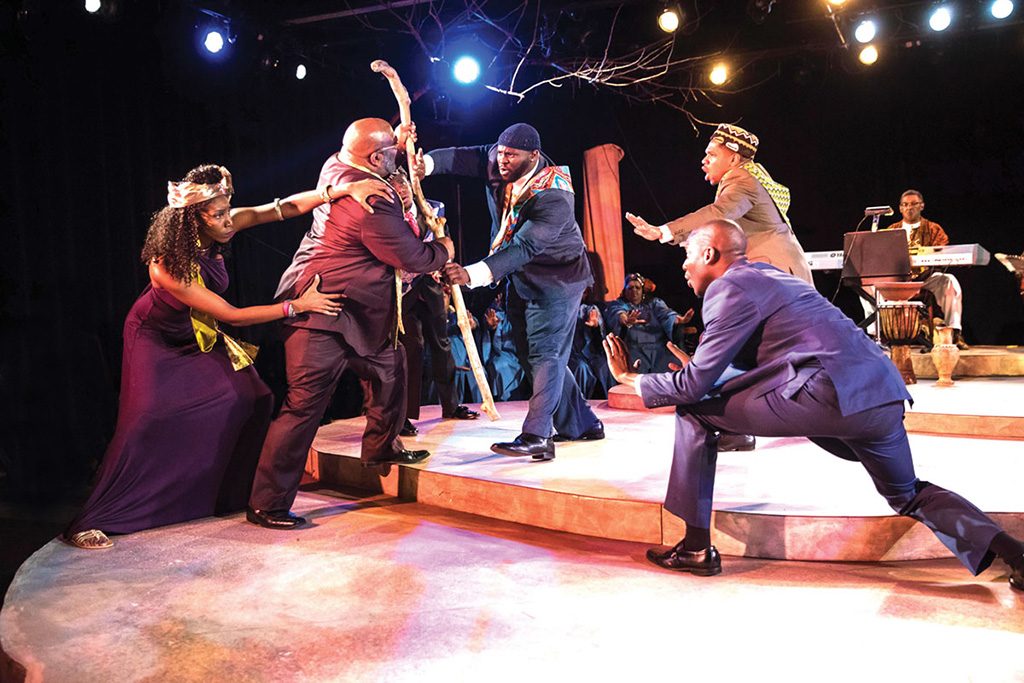 Musical director e’Marcus Harper-Short has galvanized some top-notch singing talent into a finely tuned instrument, bountifully supported by Minister Becky May Jenkins and the Women’s Ecumenical Choir of the Ebenezer Baptist Church of Alexandria. To put it succinctly, the cast and chorus sound tight, and the singing’s mostly on point. It’s several of the characterizations that fall flat, and the musical suffers in turn.

In the case of Ms. Byrd’s Antigone, the play calls for more than just daughterly devotion, which she portrays adequately but without much added dimension. As Singer Oedipus, stage and screen vet DeMone has a commanding, soulful voice that shakes the rafters in song, but his quieter moments describing the fearful, deteriorating old king feel mawkish and overplayed. His Preacher counterpart, Mr. Newman, is more dynamic and convincing, delivering his mellifluously-voiced oration.

Likewise, A.J. Calbert and Greg Watkins — as Theseus and Polyneices, respectively — make music of the poetic language, with Watkins in particular going to the welcome trouble of investing his role of Oedipus’ renegade son with bracing spirit and determination.

Mr. Watkins might fairly be regarded as a double-threat for his efforts here, among a cast that delivers the show’s music with more verve and precision than is afforded the book. The original Broadway production of The Gospel at Colonus, featuring Morgan Freeman delivering the sermon on the mount, was famously well-acted. Avant Bard’s production, on the other hand, is well-sung. Go for the voices. 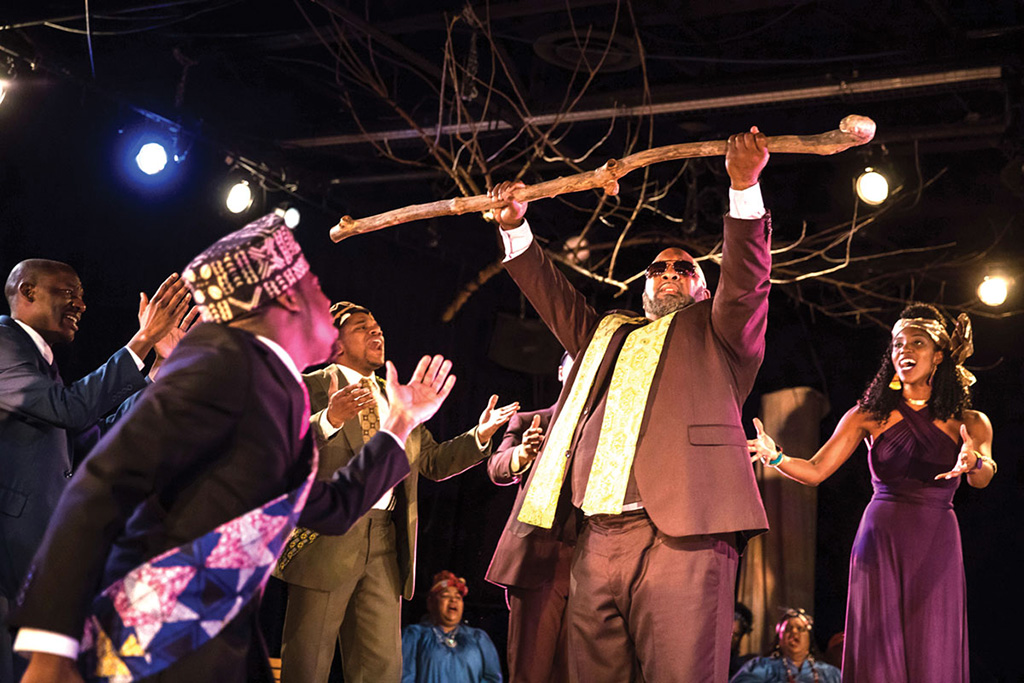 André Hereford covers arts and entertainment for Metro Weekly. He can be reached at ahereford@metroweekly.com. Follow him on Twitter at @here4andre.
← Previous Story “Fickle: A Fancy French Farce” at Olney Theatre
Next Story → Novel Notion: The Select at The Shakespeare Theatre Company (Review)