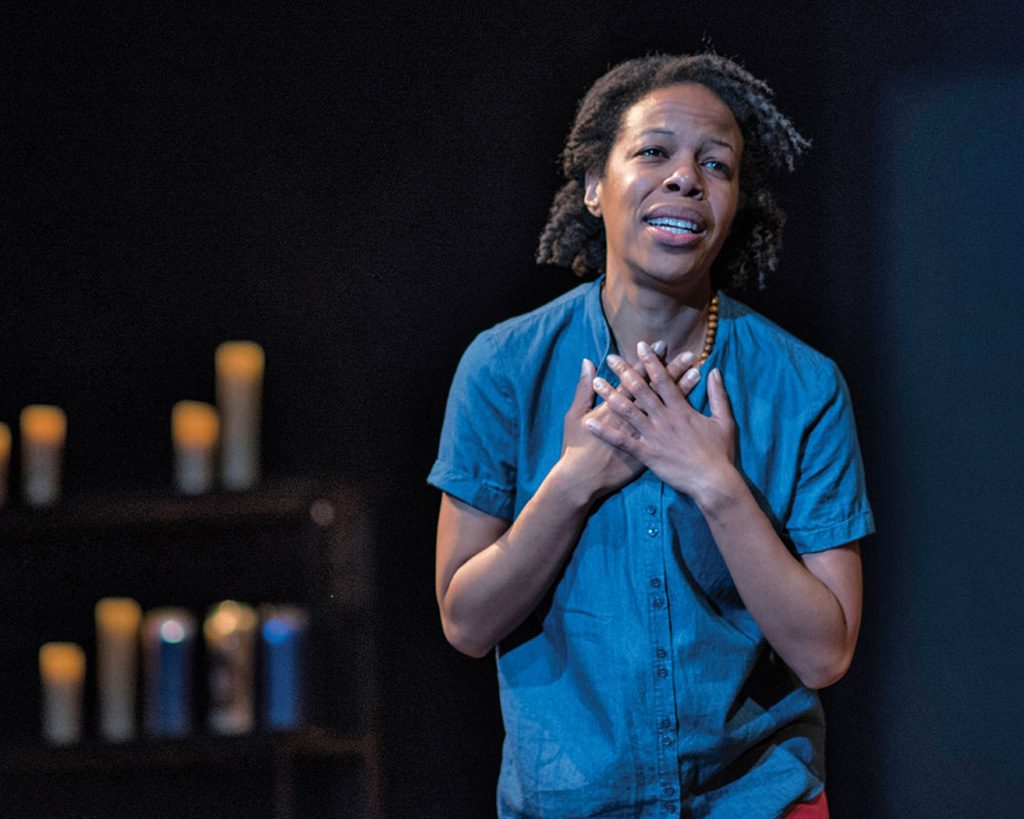 There is a subtle touch of performance art in Nilaja Sun’s Pike St. It begins with her sitting silently center stage, while the audience arrives and settles. As she sits, eyes closed, amid the ambient sounds of daytime radio, she enters a gentle state of change, her limbs moving slowly and minutely like deep-sea tendrils touched by tiny currents. When she coalesces into the first of the many characters she will play in this one-woman drama — the brain-damaged young girl Candi — the transformation speaks deep, silent volumes. This underwater world is where Candi lives. But there is even more to it than this: Without a word, Sun has given us Candi’s inner realm, before we have had the chance to judge her on a body she can no longer control. It is an inspired concept.

And although Pike St. (★★★) quickly turns to more conventional territory, these interludes continue to haunt the narrative, immersing us in Candi’s perception of life — be it through people, music or the blare of the TV. They sit in artful, poignant contrast to the vibrant, sentient, sometimes gritty world of her extended family and the neighbors who populate the tenement where she lives in New York’s lower east side.

Thus, even as the drama begins to unfold — an imminent hurricane working the pressure-points of a family already laboring under a lifetime of stressors — there is always a sense of multiple consciousnesses. Candi’s, ours, Sun’s as playwright. If this is largely suggested, it is also given directly. In the guise of Candi’s grandmother, for example, Sun firmly breaks the fourth wall. She invites us in, but she is also implicitly asking us to regard ourselves — a (doubtlessly) middle-class audience — as we embark on our quest to feel and understand her sights, sounds and messaging.

Don’t let these more abstract observations deter because Pike St. is a lively and engaging drama. There is Candi’s gentle-souled but fraught mother Evelyn trying to get hold of a generator in case the storm kills the power on her daughter’s respirator. There is the comical but increasingly troubled grandfather. There is Evelyn’s brother Manny, arriving back from active duty with his own storm of untold baggage. And there are ebullient friends and neighbors. There is comedy, some wit, and much of the universal dynamic of all families, good and bad. Manny finds he is no longer the carefree street kid he once was, grandad reveals the secret wounds of a Vietnam vet, and Evelyn begins to glimpse the possibility that Candi may never recover. 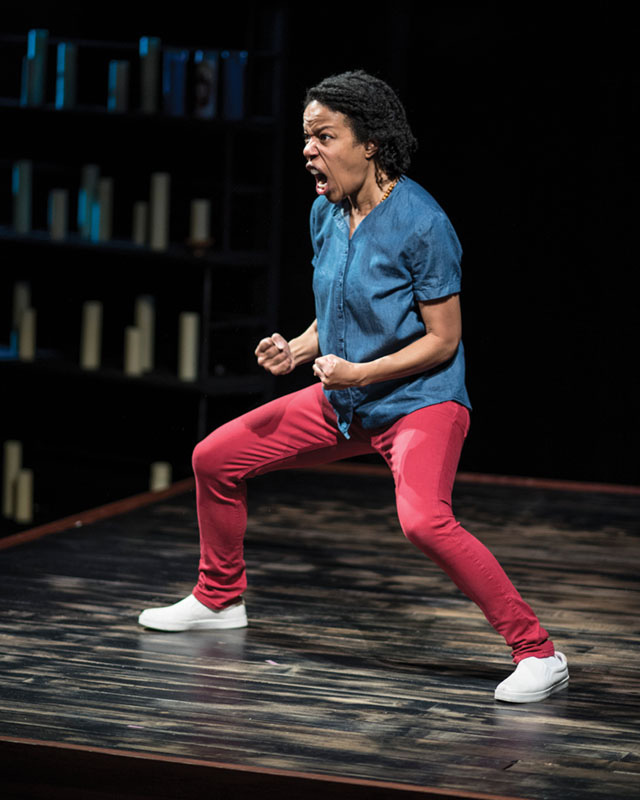 If this seems like a boatload for a solo performer, rest assured that this is truly Sun’s milieu. She is nearly seamless in her quick exchange between characters as they banter, argue and occasionally acknowledge the silent girl in their midst. And it’s not just the cleverly observed characteristics that identify them — Sun works them from within. They are captured in their essence and this makes it incredibly easy to see and hear who is talking, no matter how fast the repartee. Even better, director Ron Russell, obviously simpatico with Sun’s vision, works with her to keep the balance and rhythm of the piece intact throughout. It is infused with energy and yet it’s carefully choreographed. We are always in the loop, no matter how crowded and noisy the apartment.

All told, it is an amazing acknowledgment of theater as a uniquely powerful medium: one writer, one actor, one director (and admittedly some evocative music and lighting), and suddenly a multi-faceted world is bubbling out from the stage and into our psyches.

Still, Sun has struck something of a compromise here. Perhaps in acknowledgment that a solo performance is not the most accessible, she has exchanged some nuance for broader brush strokes. There is a bit of exaggeration, a few overly familiar scenarios (such as the war veteran who has flashbacks) and occasionally she teeters a little close to caricature. The elderly Jewish neighbor who punctuates her speech with “Oy” perhaps being the worst offender. And, truth be told, as touching as the ending is, one feels it steers away from the true miracle of these people — that they persist in living and finding joy, even in deepest poverty and neglect. 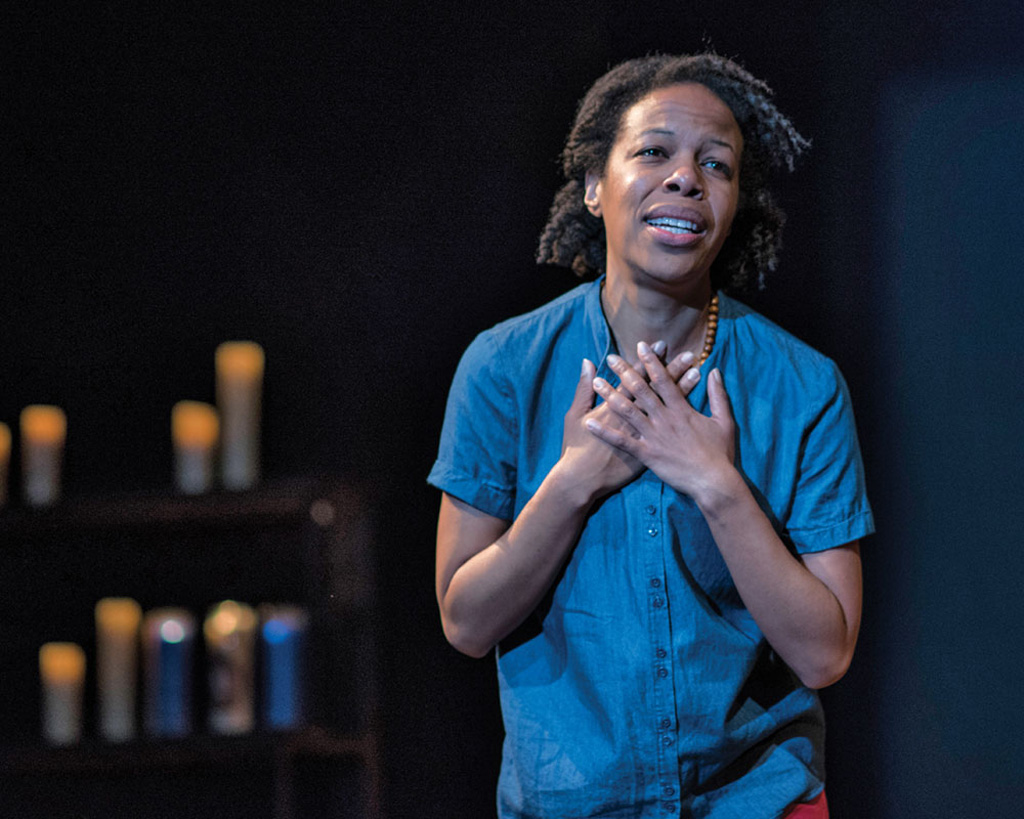