Review: “The School for Lies” at Shakespeare Theatre

A fun, frilly and decidedly cheeky adaptation of Moliere’s The Misanthrope, David Ives’ The School for Lies (★★★★) is a rom-com for wordsmiths and wig-lovers. If the original is a gorgeous antique — and no doubt drew its share of titters back in the ancient day — Ives’ streamlined, 90-minute plot, unstoppable couplets, and the infusion of mega-topical references blows it wide open for today’s audience. Just do remember there was an original — and maybe even read it!

In this satirical twist on 17th century Parisian high society, lawsuits are social sport, with all and sundry suing for slander and then using their influence on authority (judicial or royal) to sway the cases. Into this melee barrels the contemptuous Frank, a grumpy young man missing a few circuit-breakers, who within minutes has sent the foppish aristo Oronte into a litigious rage. Oblivious to the dangers of bankrupting lawsuits, Frank carries on dissing everyone in sight, including Celimene, a sharp-witted society gal with a string of suitors and her own worrying lawsuit. But when she gives as good as she gets, Frank is smitten, and so begins a romance beset by misunderstandings, mistaken identities, and powerful passions.

Fast-paced wit are the order of the day and director Michael Kahn spins this production like a top. But if he keeps the repartee ripping, he also knows when to savor a moment. Just as vitally, he applies a blissfully light touch to the physical antics, pitching it perfectly between the subtle and the ridiculous. Completely in tune with Ives’ light-hearted irreverence and Kahn’s simpatico vision is Alexander Dodge’s playfully clever set. It’s all a charmingly clever poke: at past, present, people, and politics.

Of course, much of the joy is in the array of comical characters paying court to Celimene, but there’s no doubt that the couple at the center needs to start a fire and keep it going. As the intolerant Frank, the appealing, dashing Gregory Wooddell is delightfully frenetic, delivering Ives’ lingual barrages like he was born to it. It’s a tad more complicated with Victoria Frings. She gets the boldness and intelligence of Celimene right, but not quite the humor in her snark. She also needs to suggest (as Wooddell so successfully does), that there is a warmth and sensuality waiting under the games. These may be subtle points, but they put Celimene a smidgen out of sync with the charismatic Frank and the chemistry isn’t quite there. That said, does it disrupt the joyful shenanigans overall? Not a bit.

As for comic color, the trio of Celimene’s suitors largely bring the goods. As Oronte, Tom Story delivers enjoyable apoplexy and Cameron Folmar is nicely smarmy, both helped by Murell Horton’s Suess-esque costuming. They could play things a bit faster, looser, and more outrageous, as both are capable, but they are without doubt crowd-pleasers. As wealthy dimwit Acaste, Liam Craig offers some comically subtle faces; his skillful restraint works well. And as the nearly unrequited Philinte, Cody Nickell does a solid deadpan, even if he is not quite button-down enough to make his transformation as funny as it might be. In the dual roles of servants Dubois and Basque, Michael Glenn captures the kind of good-natured recklessness that makes the production sing.

But the true comic standouts are the virginal Eliante and the spinsterly Arsinoe, looking for love in all the wrong places. As the hilariously ardent Eliante, Dorea Schmidt nails it with comic abandon (and looks, at times, like she’d be quite a bit more fun than Celimene). As the pious snake Arsinoe, Veanne Cox pretty much steals the show with her feigned outrages and affectations.

The School for Lies is high entertainment for our own colorful times — even if its lies are tame by comparison.

The School for Lies at Shakespeare Theatre 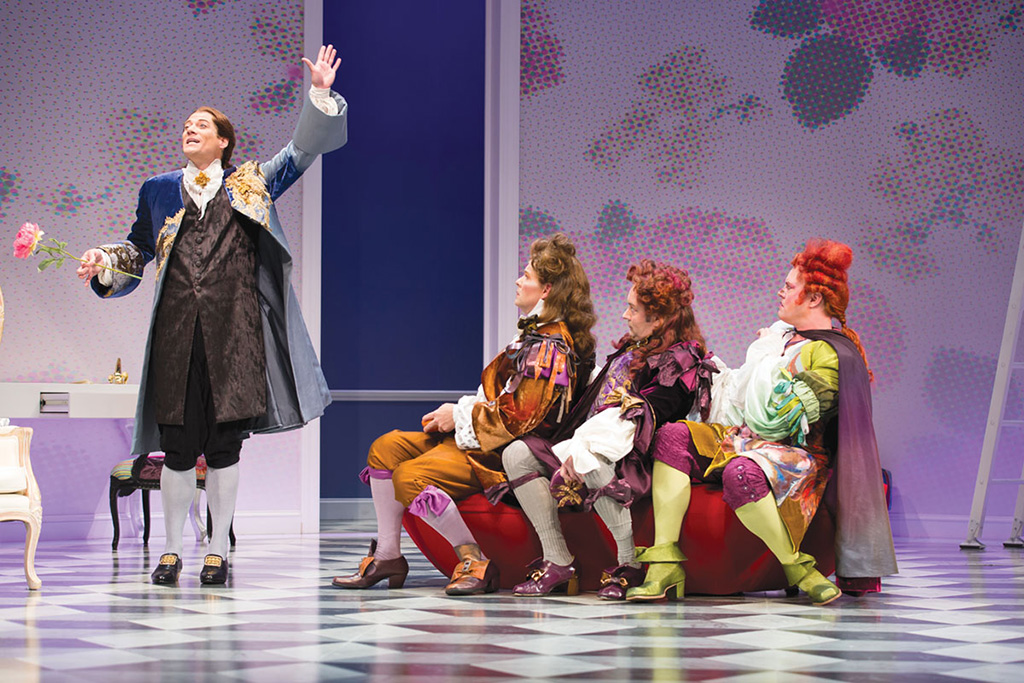