Battle of the Sexes doesn’t have to work up a sweat try and relate a decades-past sports sideshow to current issues and events. Directed by the husband-wife team of Jonathan Dayton and Valerie Faris (Little Miss Sunshine), the movie is a dryly comic account of the high-stakes 1973 contest of wills, on and off the tennis court, between champions Billie Jean King (Emma Stone) and Bobby Riggs (Steve Carell).

Carell captures the anxious, hustler arrogance of Riggs, America’s then-Clown Prince of tennis and male chauvinism as no more than just the most likeably loudmouthed, sexist huckster of that given moment. A former Wimbledon and U.S. Open champ, he was a product of a boys’ club era, and while those times have changed, oh, how they still linger. The locker-room talk of the Riggs generation has drifted onto the evening news, and the hard-fought war King and her fellow women players waged for equal prize money, reverberates through present-day battles fought for equal pay by women from Silicon Valley to Hollywood.

The movie deploys plenty of actual quotes from Riggs and U.S. Tennis Association head Jack Kramer (Bill Pullman), along with clips of late sportscaster Howard Cosell’s live commentary on the infamous match, to illustrate what Billie Jean and the other “girls” were up against. Cosell even goes so far as to point out to 90 million TV viewers that, in his opinion, Billie Jean might look like a movie star, if only she’d ditch her glasses and pretty herself up a bit.

Emphatically, but with robust humor, Battle of the Sexes clarifies that it doesn’t take a feminist to believe that women, like anyone, deserve to be respected for more than, as Riggs puts it, what they can do for him in the kitchen or in the bedroom. Billie Jean King deserved better and wouldn’t accept less, nevermind the point that she trounced Riggs in their media-ballyhooed match.

W-e meet King in her physical and competitive prime at age 29. She was number-one in the world and fresh off a win at the U.S. Open. And while married to the loyal and handsome Larry King (Austin Stowell), there are sparks of a meaningful attraction to Marilyn Barnett (Andrea Riseborough), a serenely centered hair stylist hired to travel on the King-led Virginia Slims Ladies’ Tennis Tour.

In the vein of A League of Their Own, the script, by Oscar-winner Simon Beaufoy (Slumdog Millionaire), whips up frothy sports comedy from the ladies’ low-budget cross-country caravan, as it travels from tournament to tournament. Natalie Morales is a standout as King’s on-court tour rival Rosie Cassals, and Sarah Silverman has a field day as Gladys Heldman, the tour’s manager, publicist, and de facto den mother. Heldman doesn’t get much of a story arc, but Silverman gets most of the movie’s best lines and manages to make even throwaway expositions funny.

Where Battle of the Sexes falters is in the moments where characters breeze in with just the right speech to put a button on each message, or inspire and uplift. Far better are those scenes in which the film puts aside the responsibility of making important statements and allows its characters to express themselves unsurely, to not be symbols of a struggle, but to feel real (a low-key confrontation between King’s husband and her lover, in particular, is brilliantly played by Stowell and Riseborough).

The romance between King and Barnett is rendered as the sweet, sun-dappled center of the gorgeous widescreen compositions of cinematographer Linus Sandgren. Shooting tight on their faces, every twitch of an eye becomes a confession, and the movie captures the sensuality of a good trim at the hands of an expert stylist.

And guess what, tennis fans? The tennis looks good, a rare achievement for a studio picture about the sport. Clearly, Stone put in the work to be convincing swinging a racket on-camera as one of the best to ever do it. In just about every aspect, Stone is a sheer pleasure to behold as the driven, savvy tennis giant. The actress doesn’t so much disappear behind King’s famous wire-rim glasses and shag cuts, as she projects her own strength and ambition through the sports legend’s quick wit and confident physicality.

While she captures King’s air of exceptionality, there also is a sense of the everywoman in Stone’s portrayal, firmly connecting this landmark story to so many other stories. Billie Jean King had to literally break through doors to create opportunities for herself and future generations. The legacy lives on through Stone’s remarkable performance — and through King herself, who continues to inspire people of all genders to stand up and be respected.

Battle of the Sexes is rated R. In theaters now. Visit fandango.com. 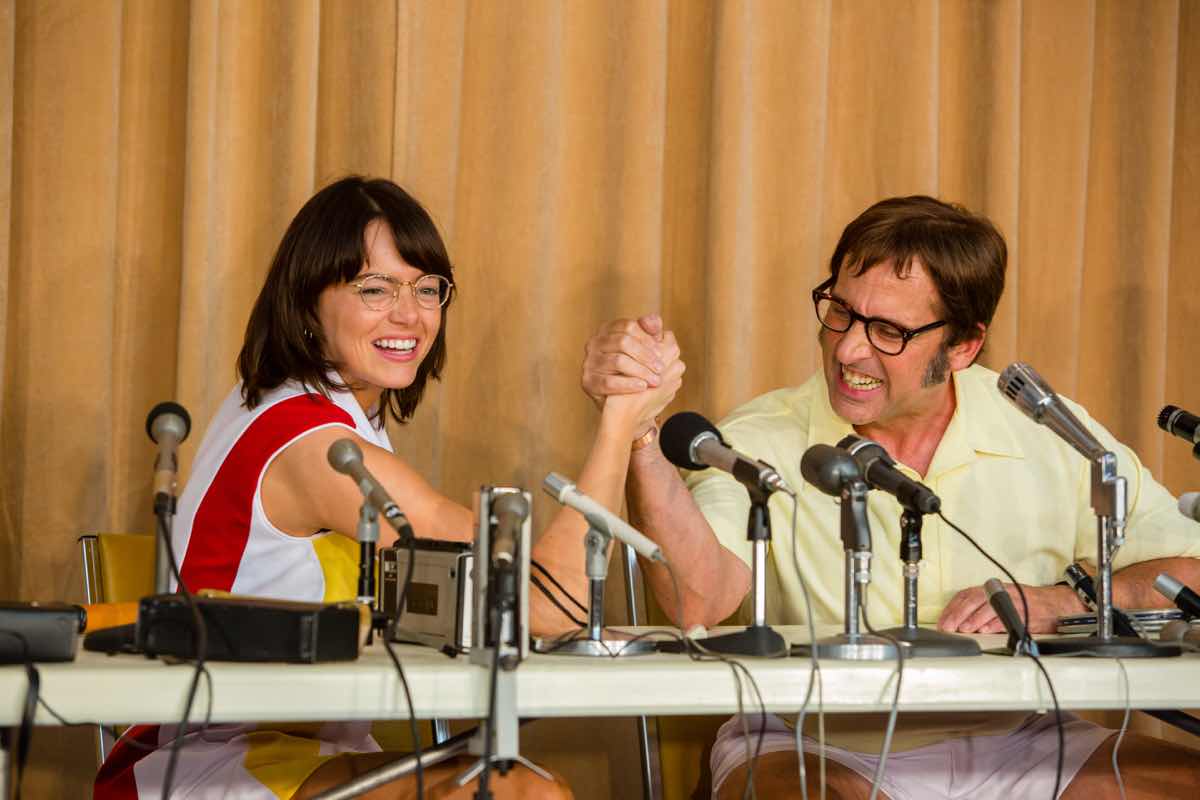