Lady Gaga rocks the house, and even picks up an American Music Award, on the D.C. stop of her Joanne World Tour. 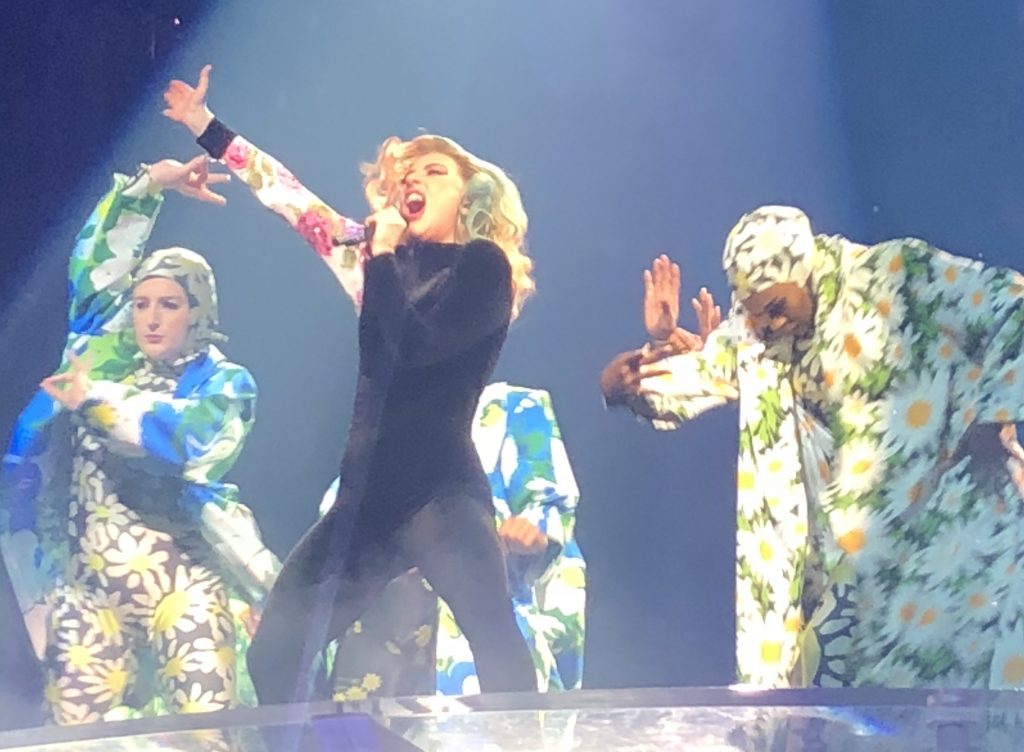 The revealing 2017 Netflix documentary Gaga: Five Foot Two opens on a striking image of Lady Gaga suspended in midair. Shot from below, her face obscured, she’s otherworldly, goddess-like, until the camera reveals the wires attached to her sides. As they hoist her upward, that glimpse of the machine helps bring the superstar back down to earth.

That’s where Gaga lives these days, having largely set aside, at least for the moment, the pomp and outlandishness of the Fame Monster era for the stripped-down, soul-baring personal touch of her Joanne World Tour, which landed with a roar at Capital One Arena last night.

Sincerity, or the reasonable approximation of same, was the hallmark of her fifth and latest studio album, Joanne. And it infused just about every moment of Gaga’s full-throated performance on the Cap One stage, as she flowed through her biggest hits and all but two tracks off the acclaimed Joanne, an album which, as she told the capacity crowd, “honored my deepest heart, and my pain.”

But, before the Grammy-winner could even get to sharing all with her Little Monsters, she had to attend to the matter of performing via satellite for the live telecast of the American Music Awards in Los Angeles. Joined by her band, the singer took to a grand piano to offer a tight, workmanlike take on last year’s standalone single “The Cure,” before making a quick change and launching her show with “Diamond Heart,” Joanne’s hard-rocking (for Lady Gaga) leadoff track.

Generously peppering smashes like “Poker Face” and “Just Dance” among her fresher fare, Gaga and her team of eleven backup dancers maintained a party vibe that kept the crowd on their feet, even during more subdued numbers like the powerful “Angel Down.” That wistful ballad, along with gorgeous renditions of “The Edge of Glory” and “A Million Reasons,” showcased the artist’s remarkable vocals and musicianship, and, yes, her heart.

As much a songwriter’s confessional as an arena-pop spectacle, Gaga’s performance managed the tricky balance of bringing one of the world’s most famous pop stars comfortably up close and personal, while still delivering all the LED-lit floating catwalks and fireworks her fans might expect.

There weren’t acrobatic dance breaks or mind-blowing guitar solos, and the video interludes were just that, brief visual beats between numbers. Also, Gaga herself, as the Five Foot Two documentary makes clear, is dealing with chronic pain caused by fibromyalgia, so her dancing, while vigorous, wasn’t dazzling. The focus remained squarely on the singer, her voice, her songs, and her presence, which she projects massively and with palpable appreciation for her fans.

So no one in the arena seemed to mind when the AMA telecast interrupted the show yet again in the late going for the live-broadcast presentation of the award for Favorite Female Pop/Rock Artist. Besting fellow nominees Alessia Cara and Rihanna in the voting, Gaga won the award, to the roaring approval of the Cap One crowd. The star appeared genuinely touched, as she delivered an empowering acceptance speech that was 100% on-message for Mother Monster.

“Just remember, if you feel different, or you feel not understood, don’t you dare give up on who you are,” she told the live audience, and viewers at home. “You fight like hell for what you believe in!”

Judging by the appreciative response, and by some of the wildest concertgoer outfits you could imagine, her fans will keep fighting for free expression, and keep believing in Gaga.

The Joanne World Tour hits a dozen more arenas around the U.S. through December 18, including dates in Pittsburgh 11/20, Atlanta 11/28, and Miami 11/30, then heads to Europe. For more information, visit ladygaga.com/tourdates.

Read: Our review of Janet Jackson at Capital One Arena.
For more music reviews, including area concerts and the latest albums, visit metroweekly.com/music.

André Hereford covers arts and entertainment for Metro Weekly. He can be reached at ahereford@metroweekly.com. Follow him on Twitter at @here4andre.
← Previous Story Review: Janet Jackson at Capital One Arena
Next Story → Priests bring “Nothing Feels Natural” to the 9:30 Club