Unsane is scary, but it requires a suspension of disbelief in order to completely satisfy 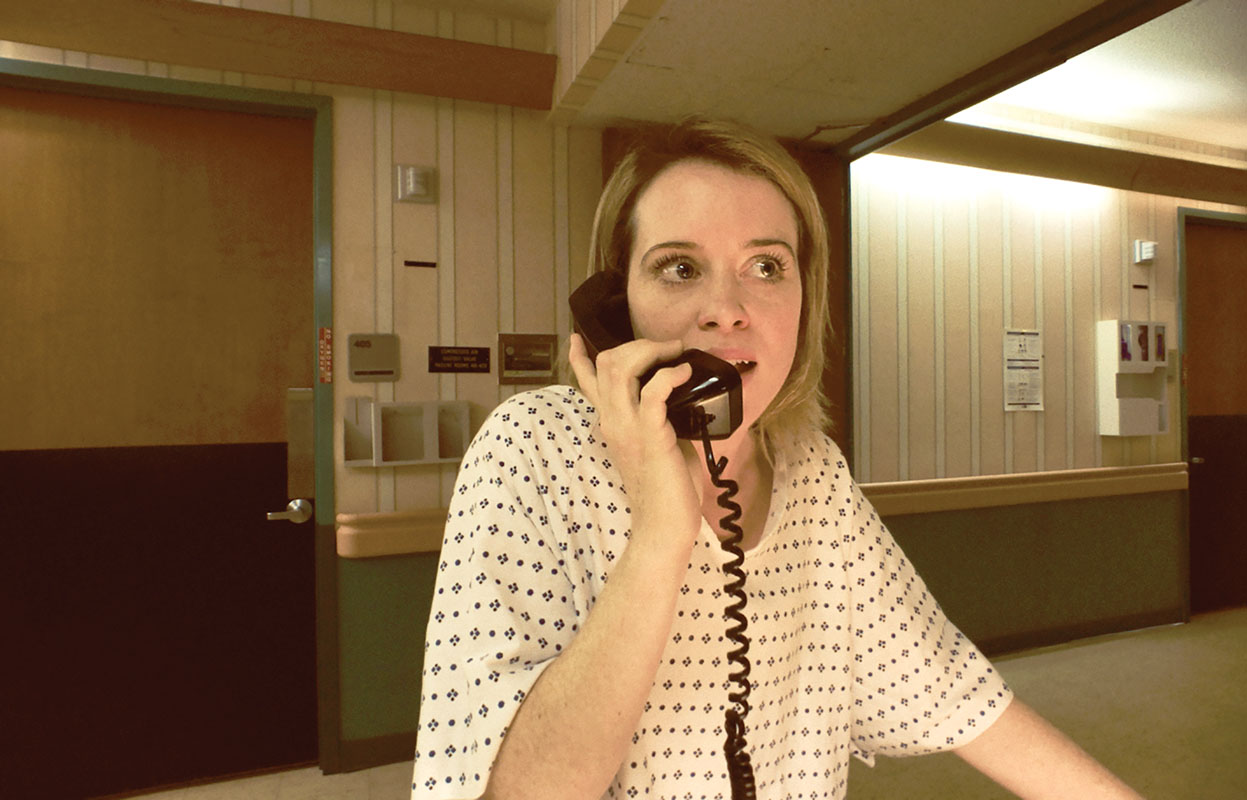 Of all the mental hospitals in all the towns in all the world, poor Sawyer Valentini (Claire Foy) walks into Highland Creek. And they don’t let her walk out. The very idea that a fairly casual visit to consult a therapist might suddenly turn into a living nightmare of confinement inside a mental institution is genuinely terrifying.

Working in indie mode, Steven Soderbergh keeps his newest film Unsane (★★★) casual, just another day in the nuthouse for Highland Creek’s paper-pushing staff, as the realization dawns on Sawyer that she has summarily and involuntarily been committed. But wait, it wasn’t entirely involuntary, because she signed the form herself. (Should’ve read the small print, Sawyer!)

Thus, she’s stuck, after admitting to the therapist that sometimes she does have suicidal thoughts. Also, occasionally, she sees visions of David Strine (Joshua Leonard), a man who was stalking her back in Boston. At least, she thinks they’re just visions. She can’t be sure.

Until she is sure that Strine has not only followed her to her new city, but he’s working inside this very hospital. Could the orderly doling out her daily meds actually be the man who stalked and terrorized her? Whether he’s real or imagined, Sawyer believes she’s been locked in a loony bin with the person she most fears, and that is enough to drive anyone truly mad.

The plot machinations that place Sawyer in her predicament don’t hold up to rigorous scrutiny, so Soderbergh lets the harrowing premise and Foy’s frightened performance lead the way. Shot on an iPhone 7 Plus using wide-angle lenses, Unsane captures the bleak horror of feeling held captive by an uncaring staff inside a facility where lives are lost, or taken.

Foy plays Sawyer as smart, resourceful, and sardonic. Her character is only idiotic when the plot needs her to be. Still, to her credit, this damsel in distress commits relatively few of the typical horror movie mistakes, and at no point does she jump into a car that won’t start. Rather, the script, by Jonathan Bernstein and James Greer, keeps Sawyer and the audience guessing, while poking mordant fun at all the “Highland Creeks and Tumbling Pines and Cedar Valleys of the world” that prey on the paranoid and well-insured. 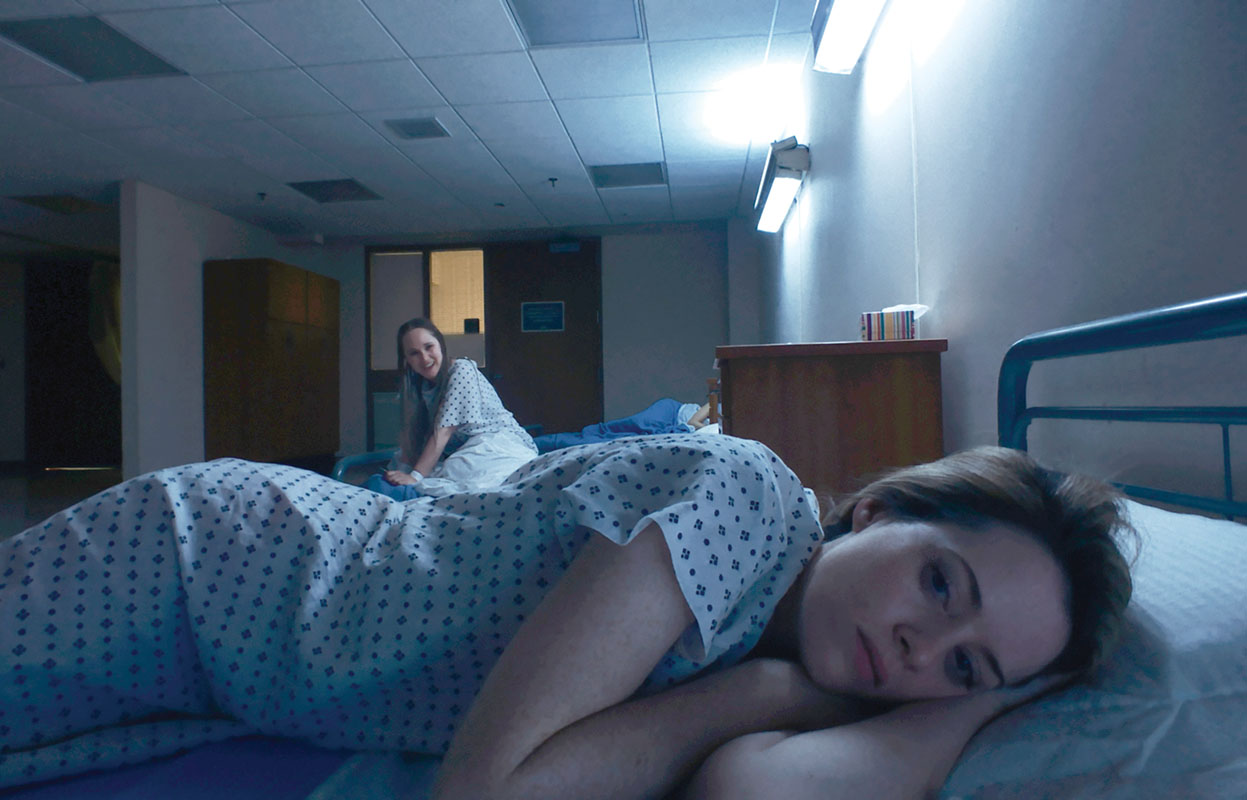 From his debut with sex, lies, and videotape, Soderbergh has been a master at lacing tension with bone-dry humor. He’s abetted here by erstwhile SNL impressionist Jay Pharoah, as Sawyer’s fellow patient Nate, hiding both a contraband cell phone and a secret. Juno Temple is not so masterful portraying Sawyer’s belligerent, cornrowed tormentor, Violet, who stays one-note crazy throughout the film.

As Strine, Leonard strikes several chords of creepy with his blank affect and oversized glasses. He looks like a serial killer mugshot, silently lingering over Sawyer’s shoulder. Leonard employs that off-putting reserve most effectively in a flashback depicting the stalker’s escalating campaign of surveillance and harassment that drove Sawyer to hightail it out of town.

There will be blood, however. By its third act, Unsane has dispensed with any mystery, and starts tallying up a body count. Under those deadly circumstances, Sawyer might go crazy trying to prove herself sane, as would practically anyone in her hospital slippers.

Soderbergh conveys her frazzled, drug-addled state via a variety of handheld camera tricks, odd edits and superimpositions. Shots roam the hospital halls Shining-style, as the film cheekily references other classic horror scenarios, including a quick nod to Leonard’s most noted role in The Blair Witch Project.

Ultimately, Unsane takes on the gleeful pace of a slasher pic, and even provides a meaty role, as Sawyer’s concerned mom, for Amy Irving, an Oscar-nominated actress well-acquainted with cinematic suspense. Her mere presence adds to the enjoyment of this cockamamie construction, which, scary though it may be, requires an unsane suspension of disbelief in order to completely satisfy.

André Hereford covers arts and entertainment for Metro Weekly. He can be reached at ahereford@metroweekly.com. Follow him on Twitter at @here4andre.
← Previous Story 2018 Spring and Summer Film Preview: “Avengers,” “Star Wars,” “Love, Simon” and more!
Next Story → Film Review: Wes Anderson’s “Isle of Dogs” is a masterpiece of stop-motion animation