Woolly's latest gives bold, moving voice to the issues of the day

Vaguely unhinged and occasionally exciting, Jennifer Kidwell, Scott R. Sheppard, and Lightning Rod Special’s Underground Railroad Game (★★★) is reminiscent of the kind of childhood dress-up game that gets wilder and weirder the longer it goes unsupervised.

The irony here is that the protagonists, portrayed by Kidwell and Sheppard, are a pair of responsible middle-school teachers trying to use a typically artless scholastic exercise to educate students (aka the audience) on the nature of the underground railroad. The twist is that, when they are not cheering or cajoling the students, the pair are losing themselves in their own psycho-sexual game of race relations. It’s original and provocative, but with a public conversation already so raw and rigorous, the question has to be: what does it add?

To some degree, with so much here delivered as an open challenge or provocation, the answer will reside largely in the heart and mind of the beholder. Suffice to say, every angle raised and toyed with is interesting, the depictions at times clever and insightful, but if it makes you think, it doesn’t necessarily make you think it through. Still, that counts for something, especially on a topic that can be over-simplified and under-examined.

Of course, the auteurs aren’t about spoon-feeding a message. Though there is a narrative, the private interludes with the teachers fly into all kinds of exploratory territory, tongue sometimes firmly in cheek. But if some of this outré adventuring works, some of it also breaks the mood and thwarts our immersion. Put simply, if the nudity and sexualization gets you marveling at the bravery and abandon of the actors, you have left the experience. It’s on the playwrights to anticipate this effect and decide where to find the balance. Here, for all but the most unflappable, it will be a serious distraction. So much so that true contemplation can only come after the show is over, when there is space to contemplate in the cooler rooms of memory. Ultimately, arguably, some power — if not value — is lost.

Still, if much here shocks for shock’s sake, there are other moments that are magically sublime. Take, for example, the extraordinary interlude in which, Kidwell, embodying a caricature of a black, female “house” slave, appears in striking, surreal silhouette. As the male teacher (portrayed by Sheppard) begins delivering yet another anodyne lecture to the class, she increasingly interrupts him until she has completely co-opted the conversation. Their exchange becomes stranger and more sinister and it is all quite riveting — at least until it spins off into the stratosphere. It’s a stunning mood and moment, one that might hail from another, far subtler and more insidiously dangerous piece.

And, truth be told, as pedestrian as it sounds one can’t help wishing the playwrights had “settled” for something a tad more conventional in this tale of a tortured love affair. There are just enough humorous, touchy exchanges, just enough sense of the inanities of middle school life to feel that this would have made for a very clever and entertaining play — the kind that plays around with its cynicism and hope, leaving plenty of ambiguity. No doubt it would lose its deeply subversive thrust, but it might invite a few more people into its turbulent heart.

Kidwell and Sheppard capture this daring vision fearlessly, seamlessly moving between the real and the surreal with equal investment and subtlety. As the woman teacher and slave women, Kidwell is magnetic, her face a study in irony, cynicism and the perpetually irked. She writes it little and large as needed, pushing and provoking without ever being obvious. As the male teacher (and Quaker), Sheppard captures the right blend of earnest, bewildered and bewildering in his complicated attempt to connect with Kidwell’s woman. Together, they make for an intriguing kind of tension.

A challenging piece to keep cohesive and accessible, director Taibi Magar largely paces it right, keeping the suspense intact, allowing the necessary and nicely choreographed chaos to reign as required.

This is Woolly Mammoth giving bold voice to issues of the day, and with expectations aligned, it will move in one way or another. For the odd Cherry Blossom tourist expecting a play about American history? It will certainly make for a trip to remember. 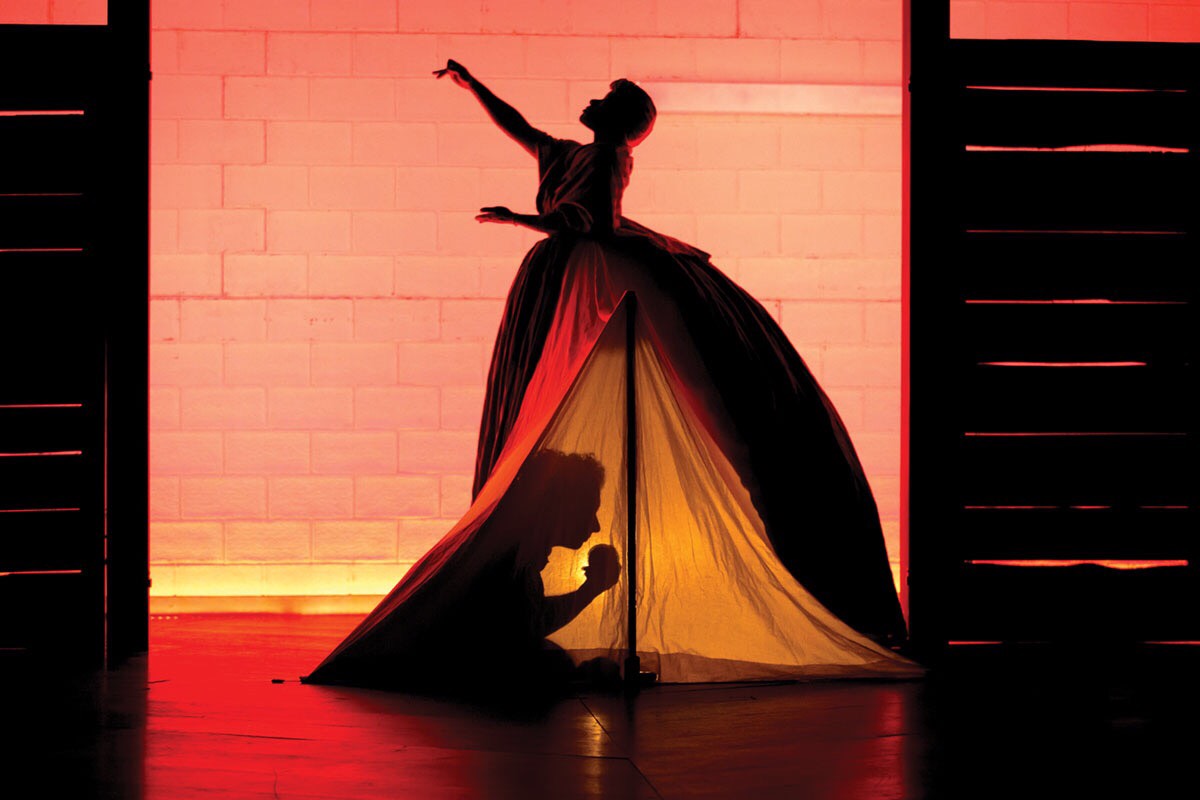