A little naughty and a lot nice, The Shakespeare Theatre Company’s musically inclined The Comedy of Errors (★★★★), is funny, cute, and just the ticket in these difficult times. With a vibe part Monty Python, part Zorba the Greek, and aesthetically reminiscent of Herge’s Adventures of Tintin, director Alan Paul creates a perfect, cheerful moment for Shakespeare’s tale of long-lost twins and their inevitable mix-ups.

An early work, students of the Bard will enjoy spotting the themes (twins) and scenarios (deadly storms) that make their first appearances here and return in later plays such as Pericles, Twelfth Night and The Tempest. But unlike the latter with their mythic textures and metaphysical layers, The Comedy of Errors keeps it far homier and cozily domestic. Married couples spar, shop merchants wheedle, everybody argues, nobody gets seriously hurt. There is ribaldry, deliciously clever language, and gorgeously winsome monologues, but there are no Shakespearean wars, murders, or tragic betrayals. That’s for after the theater, when we get back to the headlines.

With madcap comings and goings so much a driver of this comedy, set designer James Noone’s cramped-but-movable town is crafty and clever, bringing its own brand of wit to the rapidly changing locations and the characters’ energetic maneuvers. We are moved in and out of houses, around corners and into and out of the town’s narrow streets with minimal fuss, maximum efficiency, and total clarity. The characters may lose their bearings, but we do not. When the plot thickens and tempers rise, director Paul whips people and set into a comic, physical crescendo that is choreographed to a fabulous tee.

Indeed, pretty much everything here is done to a tee, certainly when it comes to the lead performances. In honor of Artistic Director Michael Kahn’s final season at the helm, the cast is a gathering of many of the Shakespeare Theatre Company’s long-standing talent, all of whom can carry comedy as skillfully as they carry the beauty and depth of their Shakespeare.

Cornerstone of this talented ensemble is the always charismatic Gregory Wooddell. Bestowed with Superman/Clark Kent good looks, Wooddell plays happily against type here, delivering his Antipholus (of Syracuse) with a kind of just-got-out-of-bed cheerful bewilderment between moments of authentic passion and some stellar comic timing. As the hilariously assertive Adriana, Veanne Cox couldn’t be more in her element, channeling Maria Callas with a hint of Irene Papas in her brittle but salacious Adriana. Her scenes with Wooddell’s Antipholus, who she mistakes for her husband (his twin), draw some of the best laughs for their perfectly timed comedy and the kind of risqué sensibility that knocks this production into better, wittier realms.

Working incredibly hard as a second set of long-lost twins, the Dromios of Syracuse and Ephesus, Carson Elrod and Carter Gill provide much of the broad comedy with their put-upon manservants. Though they don’t seem much like twins, they each bring plenty of humor — Gill for his long-suffering consistency and Elrod for his odd inspired moments, especially when it comes to J. Bernard Calloway’s Flip Wilson-inspired Luce. As the “other” Antipholus (this one of Ephesus), Christian Conn is a tad less polished than Wooddell, but he does deliver some priceless exasperation as the confusion mounts. Finally, as counterpoint to the arch Adriana, Folami Williams’ Luciana is convincing sweet and genuine, though there is no discernable chemistry with Wooddell’s obviously too-much-older (and a lot more fun) Antipholus.

The other standouts here bring all manner of variety and color, regardless of size of the role. As the jewelry merchant Angelo, Tom Story thoroughly enjoys his campy outfit and persona, while Matt Zambrano brings zing to both his Tailor and the temperamental Second Merchant. Sizzling with presence, Eleasha Gamble offers some musical theater glam to her Courtesan. And back in the comedy category, a well-disguised Sarah Marshall as Dr. Pinch runs with Paul’s slightly incongruent southern Baptist exorcist theme, which could have been rather tired without her inventive chops. The most guilelessly ebullient performer of the evening, the mega-versatile Matt Bauman’s police officer and louche Greek waiter are truly entertaining.

Of course, any thoughts on this Error must end with the wonderful Nancy Robinette as Emilia and Ted van Griethuysen as Egeon. Sharing the warmth of their long association with the Company and their commitment and joy in delivering Shakespeare, they continue to give back to the audiences that so value their art.

The Comedy of Errors 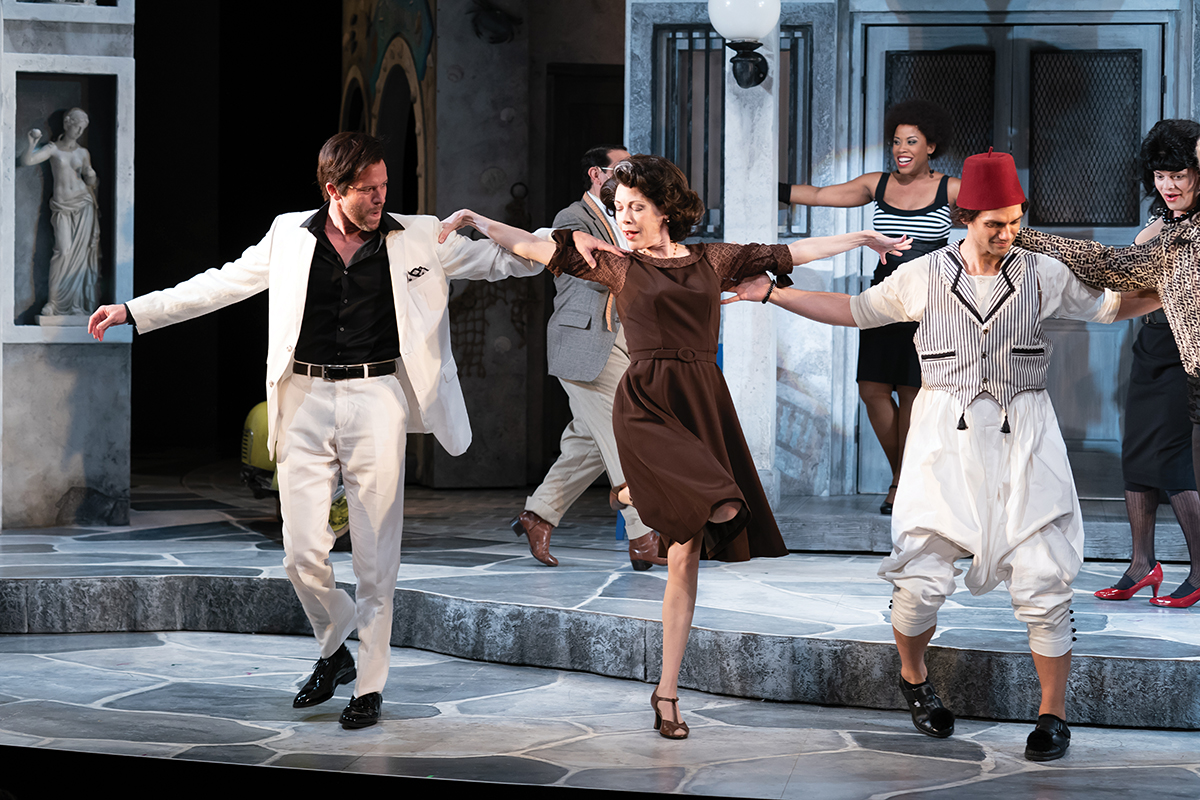 Christine Baranski, who starred in the original Off Broadway production of Sunday in the Park with George, will moderate the conversation between the two living theater legends and creative partners who were also behind Into the Woods and Passion. The focus will be on the period in time when Sondheim had vowed he was done with musicals altogether after his decade-long run of Tony-winning shows (Company, Sweeney Todd) ended in 1981 with Merrily We Roll Along, a notable flop.