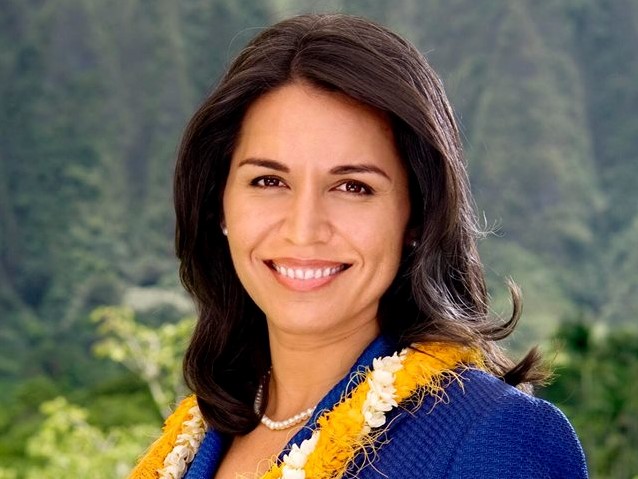 Rep. Tulsi Gabbard, a Hawaii Democrat who announced last week that she will run for president in 2020, has apologized for her long history of anti-LGBTQ statements and actions.

Gabbard told CNN’s Van Jones last week that she would seek the Democratic nomination in 2020, but almost immediately after her announcement, activists started sharing Gabbard’s history with anti-gay advocacy work.

Particularly during the 1990s and 2000s, Gabbard’s political history is littered with anti-LGBTQ red flags.

While seeking the Hawaii state legislature in 2002, Gabbard told the Honolulu Star-Bulletin that working with her father, State Sen. Mike Gabbard, to pass a constitutional amendment banning same-sex marriage taught her “that real leaders are willing to make personal sacrifices for the common good.”

The organization labeled homosexuality an “unhealthy, abnormal behavior that should not be promoted or accepted in society,” according to CNN. In addition, ATM reportedly supported conversion therapy, a practice banned by Hawaii last year.

Gabbard herself wrote a 2000 press release for ATM which took aim at the LGBTQ activists who opposed her mother Carol’s attempts to win a seat on the state board of education, saying a “war of deception and hatred” was being waged against her mother “by homosexual activists because they know, that if elected, she will not allow them to force their values down the throats of the children in our schools.”

In 2004, while a state Representative, she opposed civil unions, taking aim at “homosexual extremists.”

“To try to act as if there is a difference between ‘civil unions’ and same-sex marriage is dishonest, cowardly and extremely disrespectful to the people of Hawaii,” Gabbard said. “As Democrats we should be representing the views of the people, not a small number of homosexual extremists.”

But in 2012, while running for Congress, Gabbard did an about-turn and apologized for her past comments.

Arguing that her military career in Hawaii’s National Guard had led to an evolution on her views, she apologized for “statements that I have made in the past that have been very divisive and even disrespectful to those within the LGBT community. I know that those comments have been hurtful and I sincerely offer my apology to you and hope that you will accept it.”

Gabbard has since supported pro-LGBTQ legislation in Congress, including co-sponsoring the Equality Act, and also switched to supporting same-sex marriage and the end of the Defense of Marriage Act.

In 2013, she joined Hawaii’s congressional delegation in supporting marriage equality in Hawaii, saying she disagreed “with a two-tiered, discriminatory government policy of ‘marriage’ and ‘civil unions,'” in a statement.

And Gabbard has apologized once more this week for her past words and actions in a statement to CNN, saying she regretted the positions she once held.

“First, let me say I regret the positions I took in the past, and the things I said,” she said. “I’m grateful for those in the LGBTQ+ community who have shared their aloha with me throughout my personal journey.

“Over the past six years in Congress, I have been fortunate to have had the opportunity to help work toward passing legislation that ensures equal rights and protections on LGBTQ+ issues,” she continued, “such as the Equality Act, the repeal of DOMA, Restore Honor to Service members Act, the Employment Non-Discrimination Act, the Safe Schools Improvement Act and the Equality for All Resolution. Much work remains to ensure equality and civil rights protections for LGBTQ+ Americans and if elected President, I will continue to fight for equal rights for all.”

But that seems to have done little to convince those who can’t forget her record, including Hawaiian Democratic Sen. Mazie Hirono, who refused to endorse Gabbard in an interview with MSNBC.

“I wish everyone well,” Hirono said. “But for myself and these times…I want someone who is very much has been on the page in terms of supporting equal opportunity, choice, all of the kinds issues that I have been fighting for for decades.”