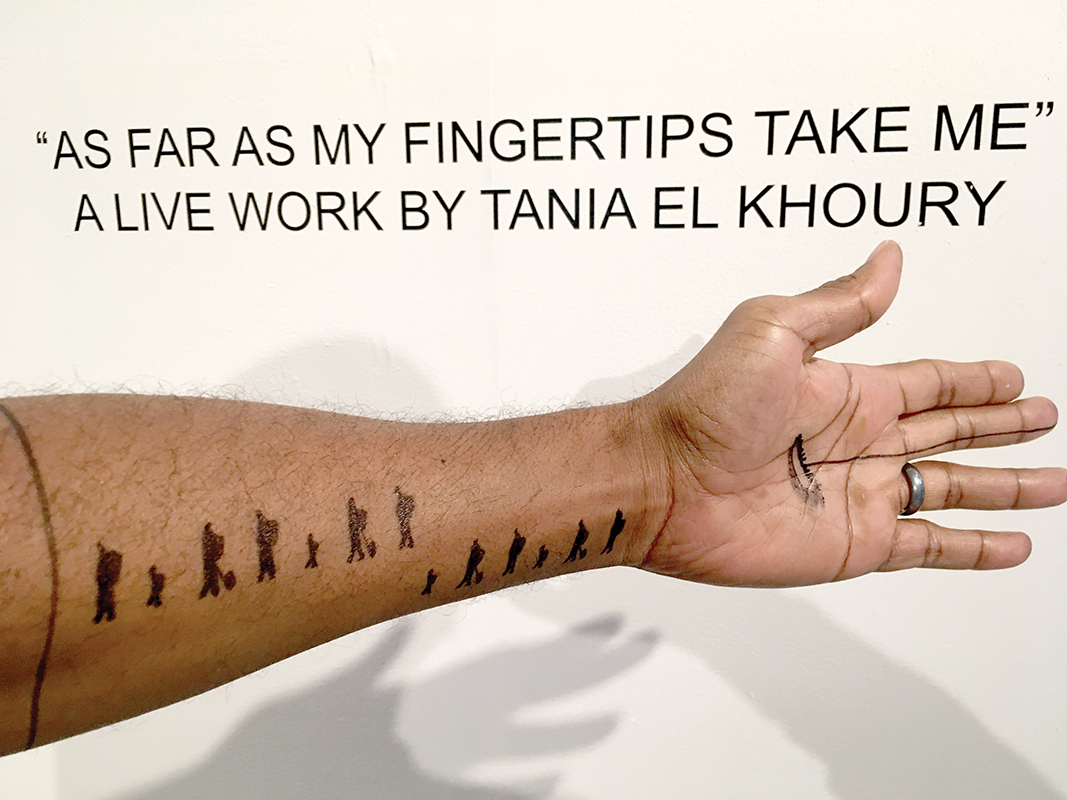 As Far As My Fingertips Take Me — Photo: André Hereford

The London-based, live artist Tania El Khoury has devised a brilliant means of connecting a worldwide audience to a true refugee story, one audience member at a time.

Her interactive performance, As Far As My Fingertips Take Me, now at Woolly Mammoth, invites the public to sit down, one-on-one, with spoken word artist and musician Basel Zaraa, and experience via art, song, text, and touch the humanity of this Palestinian man who was born inside the Yarmouk refugee camp in Syria.

Zaraa remains unseen, hidden behind a plain white wall that each visitor is asked to pass their hand through, allowing him to ink on their forearm a visual representation of his sisters’ escape from the destruction of the Yarmouk camp to the safety of Sweden.

The interaction demands a measure of trust and curiosity, and lasts less than fifteen minutes, but produces a powerful effect of empathy and understanding. That potential for making the political personal has inspired much of El Khoury’s work.

“Like many artists, I start with a political motivation,” says El Khoury. “Which is about me sharing my own political views, but also not trying to propose a balanced report of two sides or anything. [I’m] very clearly coming in solidarity with certain people; [I’m] very obviously for open borders, for example. Or believing in the need to listen to people who are discriminated against with all of the border policies that are around the world, and the fact that the world is shutting down and more closed off nowadays.”

While the performance has toured the globe for the past three years, its themes of displacement and resistance, and the physical manifestation of walls and borders, are especially fraught with meaning right here, right now. El Khoury could not have foreseen the timing of specific U.S. policies, but she definitely intended to make a statement about putting up walls.

“I mean, it’s just obviously like what Basel says at the end of the introduction [to the performance]: ‘We do cross borders.’ No matter how policies were forced on us, we are used to crossing borders. We will continue to cross borders. All borders that are made to us — not just the actual apartheid walls, for example — but also barriers and limitations that are put on marginalized groups in a society. In that sense, it is a kind of affirmation that we will find ways to penetrate these walls that are made and put everywhere for us.”

André Hereford covers arts and entertainment for Metro Weekly. He can be reached at ahereford@metroweekly.com. Follow him on Twitter at @here4andre.
← Previous Story “Image China: Xuanzang’s Pilgrimage” presents a spectacular journey into the nation’s past
Next Story → Theater Review: Rainbow Theatre Project’s “Jeffrey”