Theater Review: ‘Masterpieces of the Oral and Intangible’ at Signature Theatre 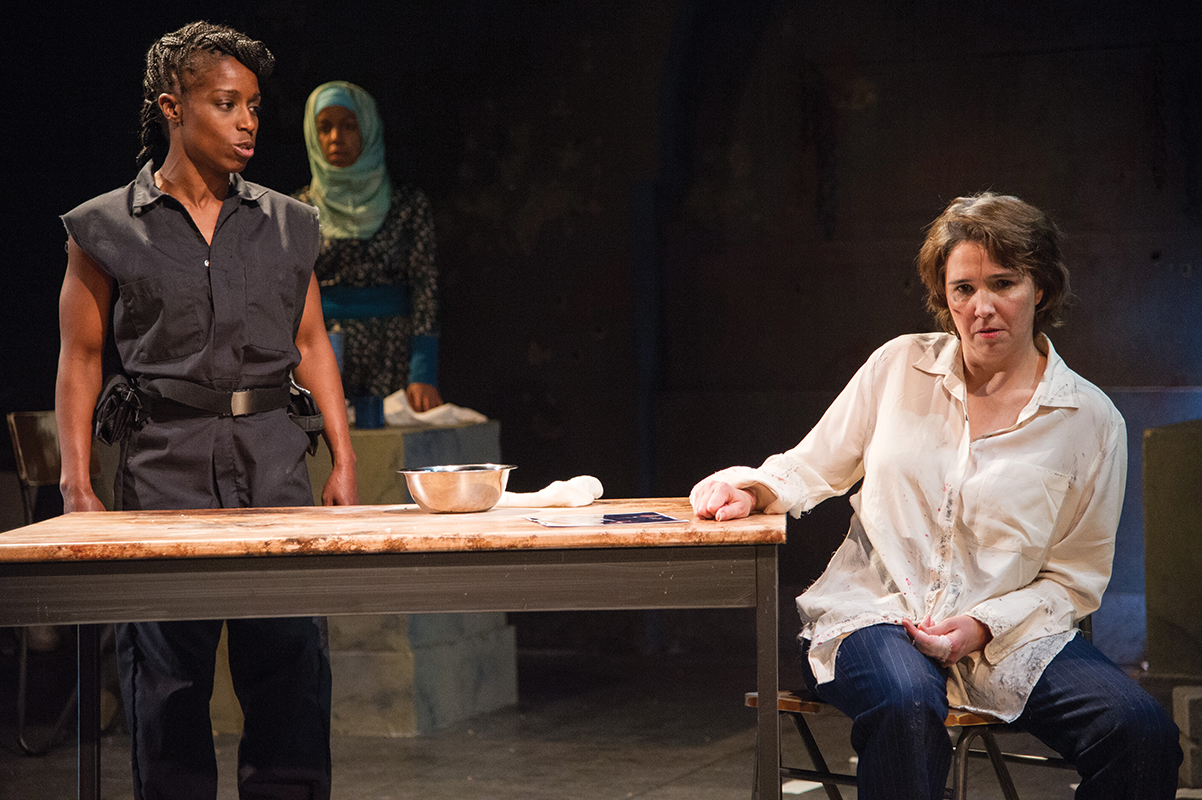 Masterpieces of the Oral and Intangible Heritage of Humanity — Photo: C Stanley

Many more questions are raised than get answered in Heather McDonald’s curiously vague drama, Masterpieces of the Oral and Intangible Heritage of Humanity (★★). And Nadia Tass’ staging inside Signature’s Ark theater space doesn’t reckon well enough with the story’s uncertainties to keep them from constantly distracting from what’s playing out both onstage and off.

The stage itself — a spectacular shambles of debris and toppled artifacts designed by James Kronzer, and lit, perhaps a bit harshly, by Sherrice Mojgani — does its job laying the foundations of McDonald’s tale, set after 100 years of war have devastated the nation. A host of natural disasters, including lethal storms, floods, and winds, have ravaged what remains.

What actually remains is the question, among a preponderance of other pressing queries. Addressing a lecture to an audience in this dilapidated Museum of Art and Antiquities, we find Layla (Holly Twyford), an expert in the restoration and conservation of art, and she has questions too. She wonders, as anyone might, what things are worth saving when practically everything that once was beautiful and beloved has been destroyed.

The question takes on more than just philosophical significance when Layla is rudely conscripted into restoring a painting, possibly a Rembrandt, under orders of the oppressive ruling regime. She receives her orders from Mitra (Felicia Curry), a soldier of the regime, who can’t answer for Layla why Mitra’s superiors believe this piece of art should be saved.

And although they spar verbally, even physically, nothing that Mitra says or does reveals what principles might govern this movement for which she fights and sacrifices. For that matter, who’s behind this movement, and who’s fighting (and losing) this 100-year war?

Layla and Mitra argue from ill-defined yet somehow opposing sides, and, strangely, neither flinches the first time they, and the audience, hear gunfire just outside the building. A furtive nurse, Nadia (Yesenia Iglesias), who tends to Layla’s wounds, also doesn’t flinch or seem concerned that armed soldiers might at any moment bust through the door. Later, when shots are fired somewhere in the near distance, all the women show fear. What might have been different that time remains unclear, as do the identities of who’s firing the weapons, and who’s getting shot.

In the casting and costumes, the play emphasizes a dichotomy of black versus white, and even has Mitra telling Layla, “You think me other.” But, essentially, Layla and Mitra embody a conflict without context, which is vexing, since maybe people are being slaughtered in some other wing of the museum. The violence inside the room with Layla, Mitra, and Nadia also takes a toll.

So, in the midst of such chaos, and lacking any apparent financial motive, why does this regime care about saving a Rembrandt, or a pair of rhinos who’ve taken up residence somewhere in the museum since escaping the zoo?

Questions accumulate like the debris scattered onstage, and it starts to seem that the playwright and production aren’t being just playfully withholding, but in fact haven’t worked out what’s going on outside the museum. The disastrous circumstances are merely a template for the thought game McDonald is playing. The players in the game acquit themselves fine, with Iglesias grasping most firmly some mission statement for her determined Nadia. In a moment of bitter humor, Nadia is called out for being “a terrible nurse.” But she’s a winning character just for having answered at least one question: What am I doing here?

Masterpieces of the Oral and Intangible Heritage of Humanity runs through April 7 at Signature Theatre, 4200 Campbell Avenue, Arlington. Tickets are $40 to $103. Call 703-820-9771, or visit www.sigtheatre.org.

Masterpieces of the Oral and Intangible Heritage of Humanity

André Hereford covers arts and entertainment for Metro Weekly. He can be reached at ahereford@metroweekly.com. Follow him on Twitter at @here4andre.
← Previous Story Theater Review: Monumental Theatre’s ‘Daddy Long Legs’
Next Story → Theater Review: ‘Into the Woods’ at Ford’s hits all the right notes