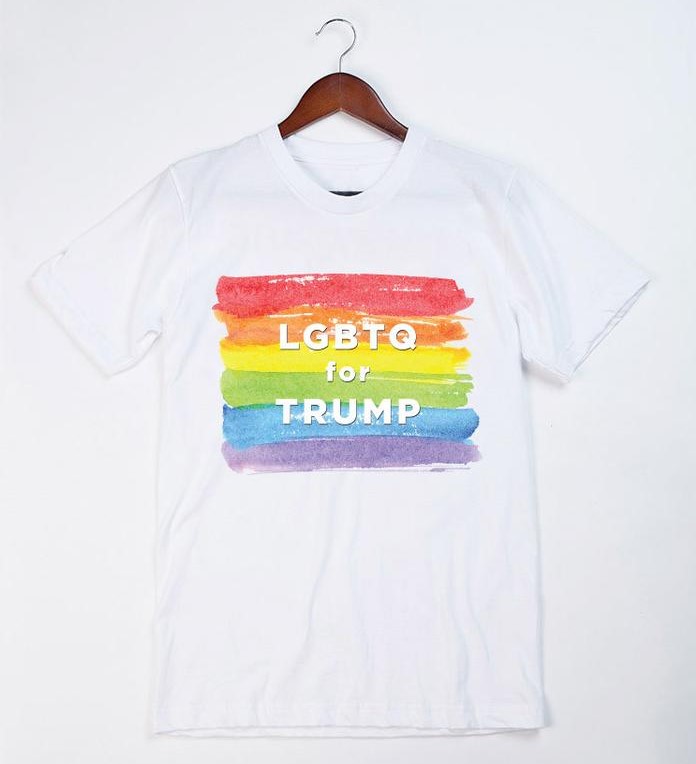 After 28 months of his presidency spent attacking and eroding LGBTQ rights and refusing to recognize June as Pride Month, Donald Trump has released a t-shirt emblazoned with “LGBTQ for Trump.”

Needless to say, the new DonaldTrump.com merch has drawn scathing responses from LGBTQ organizations, who have spent Trump’s presidency combating his administration’s bigoted actions — including allowing shelters to discriminate against homeless transgender people, rolling back protections for transgender students, banning transgender people from the military, revoking citizenship from the children of gay couples, consistently nominating anti-LGBTQ people for federal jobs, opposing the Equality Act, and allowing healthcare workers to refuse care to LGBTQ people. And that’s not everything.

LGBTQ media advocacy organization GLAAD slammed the t-shirt, accusing the Trump administration of “trying to pull yet another con job on LGBTQ Americans.”

“Like their other desperate ploys, this idea will fall flat,” GLAAD Chief Programs Officer Zeke Stokes said in a statement. “Trump should hold the sales pitch and try issuing a statement honoring June as National Pride Month and the countless of LGBTQ Americans who fought tooth and nail for the level of acceptance our nation sees today.”

“From Day One of this administration, Donald Trump and Mike Pence have ruthlessly attacked the rights and livelihoods of LGBTQ people,” Clymer said. “They have ignored anti-LGBTQ atrocities in Chechnya and anti-trans violence here at home.”

Reaction to the t-shirt on social media hasn’t been any less scathing, with many noting the hypocrisy of the t-shirt given the Trump administration’s repeated attacks on LGBTQ rights.

“The fucking gall of the T on this LGBTQ for Trump shirt,” David Mack, deputy director of breaking news for Buzzfeed News, tweeted alongside a news report about the administration revoking guidelines for transgender healthcare.

Trump — who banned trans troops, is against LGBT employment protections, wants ppl to be able to turn away LGBT customers, & is denying citizenship to kids of US gay couples born out of wedlock — is selling LGBTQ for Trump shirts for Pride https://t.co/LcfzYb6oF9 via @NewNowNext pic.twitter.com/QAG6M7tlxJ

the fucking gall of the T on this LGBTQ for Trump shirt https://t.co/bOoO62wbTm

Drew Anderson, director of News & Rapid Response at GLAAD said that Trump was trying to “steal LGBTQ American’s money with his ‘pride’ shirt,” but that Trump had “attacked LGBTQ folks more than 108 times since 2017.”

Hilarious must read: @realDonaldTrump is trying to steal LGBTQ Americans’ money with his “pride” shirt.

Think Progress reporter Zack Ford asked anyone who was buying the t-shirt to let him know “so I can block you.”

Let me know if you’re buying an “LGBTQ for Trump” shirt so I can block you. https://t.co/dHO7aKnDPi

And user @mateobreen issued a simple statement to those who might buy it:

If you bought that LGBTQ for Trump shirt do not attend pride this year https://t.co/kqwHi0q8RA

The t-shirt itself features LGBTQ for Trump against a rainbow background, while the back has a small Trump/Pence campaign logo and Trump’s MAGA slogan.

Not that you, or anyone you know, should buy one.