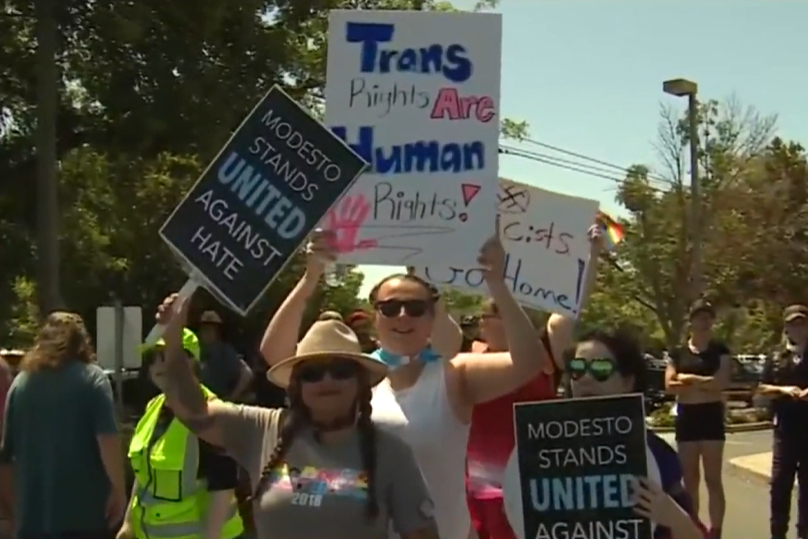 A ‘Straight Pride’ event in California designed to celebrate the “inherent superiority” of white, heterosexual Christians was attended by around a dozen people.

That contrasted with a counter-protest by local activists, which was attended by around 200 people, according to FOX 40.

Organized by the National Straight Pride Coalition, ‘Straight Pride’ took place on Aug. 24 in front of a Planned Parenthood, after the city earlier this month denied a permit to use a nearby park.

Police were present, but the crowd largely dispersed without issue a couple of hours after ‘Straight Pride’ began, according to reports.

Max Reed, a member of the Modesto Non-Violent Collective, which organized the counter-protest, said that protesters were rejecting hate in their community.

“We are rejecting this presence of hate, that we are rejecting the values that this Straight Pride Coalition represents like white nationalism and homophobia,” Reed said. “This community is standing together to reject this group and what they represent.”

He added: “This is not what Modesto is about. We’re about inclusion and diversity and unity.”

Don Grundmann, one of the organizers of ‘Straight Pride,’ complained to local media that the counter-protesters were trying to take away his right to free speech.

“This is an example of free speech in our country. It’s a one-way street. They want free speech but they don’t want to give us free speech,” Grundmann told CBS 13 Sacramento.

He added that the pro-LGBTQ protesters were attempting to “shut us down with violence…and we aren’t going to be intimidated.”

But attendees of the counter-protest rejected that notion, saying they were peacefully standing up to hatred.

“Apathy and not confronting fascists when they come out into the society and public space in our communities, it makes it unsafe for queer people, people of color,” Sabine Tischler told CBS 13.

Modesto police thanked both sides in a tweet for remaining peaceful and respectful during the event.

UPDATE The protest on McHenry Ave has dissipated and traffic has returned to normal. We would like to thank them for remaining peaceful, expressing themselves in a respectful manner while embracing our community’s diversity.

Grundmann had previously admitted that his organization is racist during a city council meeting, saying, “We’re a totally peaceful, racist group.” His comments were met with jeers, laughter, and chants from those in attendance.

‘Straight Pride’ in Modesto gained national notoriety after the gay son of one of the event’s organizers spoke out against it. Matthew Mason said his estranged mother, Mylinda, was co-organizing the event — which he branded “white supremacy masquerading as straight pride.”

Mason said his mother made him feel unwelcome after he came out at 19, and that the rhetoric used by ‘Straight Pride’ organizers was “rhetoric I’ve heard my whole life.”

“They believe Western Civilization should be straight, white and Christian with a very specific gender binary,” he said. “They believe this should be a culture war. It’s rhetoric I’ve heard my whole life.”

Watch footage from the event below: